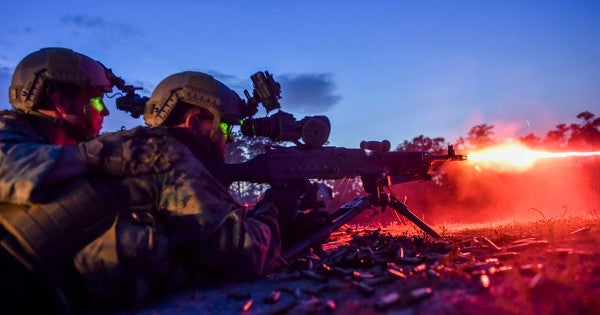 While on a three-day operation to train, advise, and assist partner forces in the unnamed country — which the command withheld due to “classification considerations, force protection, and diplomatic sensitivities” — the Marine Special Operations Team on February 28, 2017, became engaged in a “fierce fight against members of al Qaeda in the Islamic Maghreb,” according to one of the award citations for the unnamed Marines, who are often referred to as “Raiders.”

The two award citations for the Navy & Marine Corps Achievement Medal (with “V” distinguishing device for valor) were released in response to a Freedom of Information Act request by Task & Purpose. Despite redactions of names and the specific Marine Raider team involved, the citations provide a glimpse of a battle between Americans and militants on the African continent that had not previously been made public.

While the specific country where the battle took place remains unknown, Northern Africa consists of Algeria, Egypt, Libya, Morocco, Sudan, Tunisia, and Western Sahara, according to the United Nations.

Africa Command spokeswoman Samantha Reho told Task & Purpose in a statement that partner forces initially engaged and killed one al Qaeda fighter with small arms fire before calling for helicopter support. Militants then attempted to flank the Marines and partner forces from the rear, leading the Marines to “return fire in self-defense.”

According to one citation, the Raiders' communications chief and assistant element leader — typically a sergeant or above — “provided critical communications relay and ensured proper positioning of partner force elements.” The citation went on to say the Marine, while under accurate enemy fire, provided immediate trauma care for a fellow Raider who was wounded and helped evacuate him into a partner force helicopter that was hovering six feet above his position.

The second citation for an element member on the team — typically a sergeant or below — captures how the battle raged from the helicopter overhead. While onboard the partner force helicopter, the Marine fired at militants below, coordinated close air support, and directed the gunners and pilots on board the aircraft.

The militants responded with accurate fire, however, and a partner force soldier behind the helicopter's M60 machine gun was shot twice in the foot, after which ” took control of the M60 and continued to suppress the enemy while treating the wounded gunner,” the citation said.

“He then accompanied the helicopter during the casualty evacuation of the Marine Raider and a second casualty later in the day, and conducted two re-supply deliveries all under enemy fire,” the citation added.

The partner force ultimately secured the site of the battle and “assessed two enemies were killed,” Reho told Task & Purpose. The wounded Marine was evacuated and has since made a full recovery.

The gun battle between Marines and al Qaeda militants took place seven months before a deadly battle between ISIS militants and U.S. Army Special Forces soldiers who were advising partner forces in Niger. The October 4, 2017 ambush resulted in the deaths of four American service members and led the Pentagon to conduct a major review of U.S special operations missions in Africa.