Military Spouse Who Cheated 8 Times In 3 Years Asks: Should I Divorce My Husband? 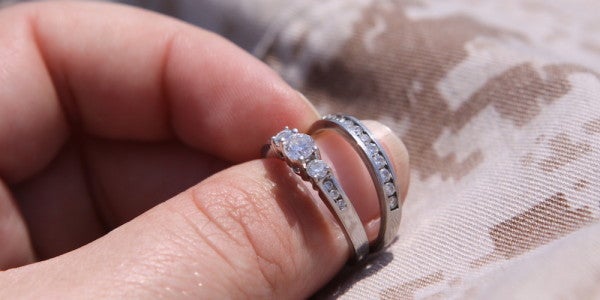 A military spouse who cheated on her husband with eight different people over three years of marriage — including one while she was pregnant with their daughter — has asked advice columnist Abigail Van Buren whether she should get a divorce.

Of course, the obvious answer here is, yeah, no shit, Sherlock, but here is some more on her background:

The woman and her husband are both on active duty and have an 18-month-old daughter. They've been married for three years. She claims they “got married very quickly” and that he isn't a good communicator, leaving her feeling lonely, on top of their physical separation from deployments.

She is so lonely, in fact, that she is “unable to curb cravings” for other men — eight at the current count — while her husband always forgives her for such transgressions.

Anyway, the anonymous spouse isn't sure whether she should just file for divorce or go to marriage counseling, which obviously will solve her problem of being about as faithful as a wild rabbit.

“Separation is part of a military marriage,” Abby wrote back. “I agree that for you and your husband to fix what’s wrong with your marriage, he will need to be present and accounted for. I do not think you should make any decision about divorce until he returns from his deployment.”

By that time, at this rate, I'm sure her number of partners will be in the double digits.

You can read the full WTF Dear Abby thread here.