The Taliban Is Actually Entering Peace Talks — In Moscow 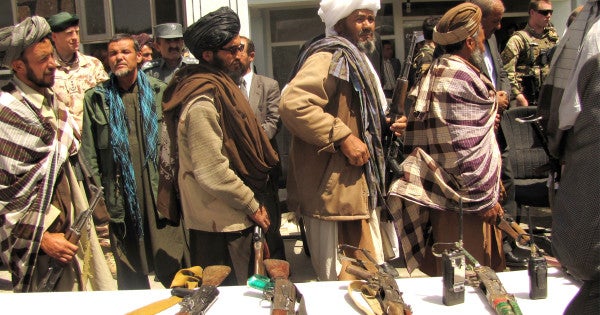 The Taliban has accepted an invitation from the Russian government to join multilateral talks next month covering the future of Afghanistan that the U.S. is not likely to take part in, according to a report in The Wall Street Journal.

The Sep. 4 meeting in Moscow, which is also expected to host representatives from Afghanistan, Iran, Pakistan, India, and China, will be “in line with efforts to launch the process of national reconciliation in Afghanistan,” said Zamir Kabulov, Russia's presidential representative to Afghanistan, in an interview with Interfax.

A spokesman for the Taliban did not immediately respond to a request for comment.

Russia has offered diplomatic and some military support to the Afghan government over the past several years. It has also been accused by the US of supplying arms to the Taliban such as machine guns, small arms, and night vision goggles — a charge that Moscow strenuously denies.

The U.S. is among the 12 countries that have been invited to the upcoming talks. The State Department said it would not be attending the meeting (The U.S. declined to attend a similar meeting last year which did not include Taliban representatives).

“As a matter of principle, we support Afghan-owned and –led initiatives to advance a peace settlement in Afghanistan,” a State Department spokesperson told Task & Purpose. “Based on the previous meetings in the 'Moscow Format,' we believe this initiative is unlikely to yield any progress toward that end.”

In July, Senior State Department officials held face-to-face talks with the Taliban in Qatar without representatives of the Afghan government present.

News of negotiation efforts comes days after the U.S. and Afghan forces repulsed a major Taliban offensive in Ghazni and elsewhere over the past week, which resulted in the deaths of more than 400 Afghan soldiers and police officers, according to The New York Times. And despite an apparent shift in strategy implemented under President Donald Trump that is now a year old, the most recent Pentagon Inspector General's report shows that little has changed on the ground.