The flaks in the Pentagon's press office seem to be working overtime to convince you that everything is fine, remain... 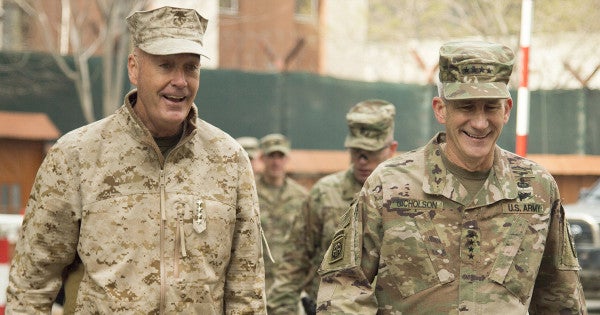 The flaks in the Pentagon's press office seem to be working overtime to convince you that everything is fine, remain calm over in the dumpster fire that is the War in Afghanistan.

Exhibit A comes from a Defense.gov story from a few days ago:

That lead sentence certainly took my fucking breath away.

And then just one day later, “reporter” Jim Garamone, who works for the Pentagon's official DoD News, knocked out this even higher-quality bullshit from a forward operating base in Afghanistan.

The propaganda piece notes that “Marine Corps Gen. Joe Dunford told reporters traveling with him 'that from a military dimension, I am enthusiastic about the prospects for 2018.'”

Oh boy, you're right, Joe. If you look at the Afghan War purely from a military dimension, it really hasn't been a miserable failure for over a decade.

Speaking of Dunford, he testified last October alongside Defense Secretary Jim Mattis to the Senate Armed Services Committee, where they both argued that relaxed rules of engagement and an increase in airstrikes would help to do the trick.

I, for one, think we should definitely increase our bombing of North Vietna… I mean the Taliban.

Apparently for Dunford, reducing the number of U.S. troops by about 18% each year over a five-year period seems to be at the speed of NASCAR. And the four-star general was intimately involved in that drawdown as the commander of the International Security Assistance Force there from 2013 to 2014.

“The Afghans no longer need much help fighting the Taliban — they can do that on their own,” Dunford wrote in July 2014.

Now in 2018, perhaps we should let them handle things. From a military dimension.