I emailed the Pentagon last week, asking them for details of an “international security” agreement Russia was touting after the... 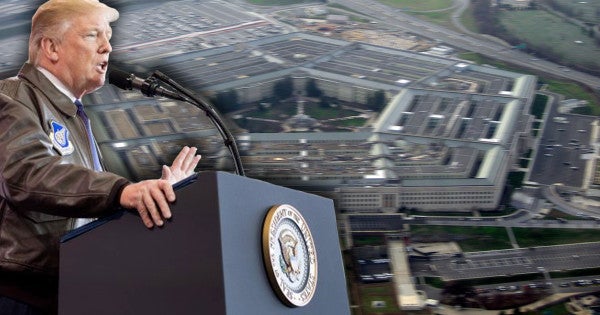 I emailed the Pentagon last week, asking them for details of an “international security” agreement Russia was touting after the Trump-Putin summit in Helsinki, Finland, and a spokesman said they didn't have any information on that.

It's become a familiar game: The White House announces some change in military policy or a major national security decision, and reporters ask the Pentagon what the hell they are talking about. It happened with Trump's “Muslim ban,” the creation of a “Space Force,” the ending of joint exercises with South Korea, Russian security accords, and the ban on transgender troops that was announced by presidential tweet.

Every time, the Pentagon seems to be caught totally off guard by such announcements. We now know that, in at least one case, they were caught off guard, because the White House didn't think to ask the U.S. military for guidance on something they might need to know about — in this case, the threat of striking Syria if they were to use chemical weapons again.

“We woke up to the statement. [White House] did not coord with us or [Joint Staff] or State from what I can tell,” Dana White, the Pentagon's chief spokeswoman, wrote in a June 2017 email upon hearing of the Trump White House's overnight statement that Syrian President Bashar al-Assad would “pay a heavy price” if he used chemical weapons against his people.

“Was there any coord traffic on this? This is the first I'm seeing about it,” replied a person on the Joint Staff. “Surprised us all,” added Navy Capt. Jeff Davis, a Pentagon spokesman.

Another email from White later showed she hadn't even seen the White House statement yet. “White House is putting this out? Do you have the statement?” she asked Tara Rigler, spokeswoman for the National Security Council.

The emails among Pentagon officials — which were obtained by BuzzFeed News and a left-leaning nonprofit through the Freedom of Information Act — clearly show the Department of Defense being caught flat-footed by an executive decision. It was a dramatic episode, of course, that would be repeated many times since.

There was Trump's suggestion, uttered at a rally in Ohio, that U.S. troops would be leaving Syria “very soon” — which had Pentagon spokespeople referring questions back to the White House, while State Department spokeswoman Heather Nauert said she was “unaware” of any change of policy.

A similar story would play out after Trump tweeted that transgender troops would not be allowed to serve in the U.S. military “in any capacity” while Defense Secretary Jim Mattis was on vacation. Hours later, a Pentagon spokesman told McClatchy the DoD would “work closely with the White House to address the new guidance,” which he said, would be expected “in the near future.” Translation: The White House didn't tell us anything about this.

Interestingly, the emails among Pentagon flacks don't just reveal a White House keeping national security decision-making close to the vest; they also confirm that the Pentagon's top spokeswoman was willing to lie to cover for the administration.

Despite her previous email to her colleagues saying there seemed to be no coordination, Pentagon spokeswoman Dana White later emailed a Breitbart reporter a statement contrary to her private views: “[Department of Defense] knew about the White House statement and provided edits in advance of its release.”

“Anonymous leaks to the contrary,” White added, “are false or misinformed.”