Operators Are Bitterly Infighting Over The Latest Medal Of Honor Announcement

The White House announced on Monday that President Donald Trump would award retired Navy SEAL Britt Slabinski the Medal of... 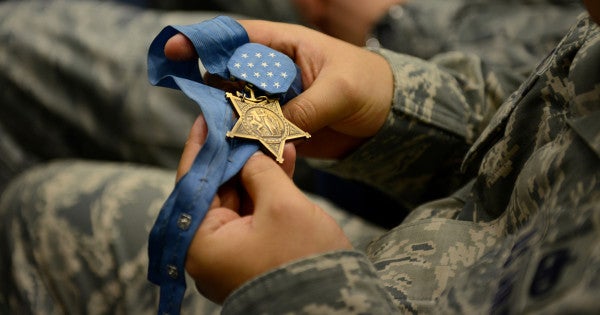 The White House announced on Monday that President Donald Trump would award retired Navy SEAL Britt Slabinski the Medal of Honor for his actions during the 2002 Battle of Roberts Ridge in Afghanistan.

On March 4, 2002, then-Senior Chief Slabinski was leading a seven-man reconnaissance team tasked with reaching a 10,469-foot peak, where his SEALs and an Air Force combat controller, Tech Sgt. John Chapman, could call in intelligence and direct air strikes.

But that plan almost immediately went to hell after the team encountered heavy al Qaeda resistance on the peak, and in the aftermath, the deadly tally for that day was seven American service members killed, 12 wounded, and two MH-47 Chinooks shot down.

Slabinski rallied his team to attempt a rescue after one SEAL fell out of the helicopter during the initial insertion, led a frontal assault on enemy positions, and repeatedly exposed himself, according to the White House.

But that’s only a snippet in what has become a more controversial story. Almost immediately afterward, the blame game started: Members of the Air Force and Naval Special Warfare communities took sides and offered competing versions of events.

For most people, this seems like armchair quarterbacking, but the second-guessing of decisions that day has been going on between special operators for years. Air Force combat controllers largely believe John Chapman alone deserves the Medal of Honor for fighting on after being left behind, while SEALs largely believe Chapman was dead when Slabinski made the call to leave.

As I reported last month, Chapman has been approved by the president for the Medal of Honor, and his family has been notified, though the White House has not yet made an official announcement. Meanwhile, Slabinski’s medal was announced first, leading one combat controller to angrily tell me: “Welcome to how every CCT guy has felt for the last 17 years. We’re never gonna be good enough to get the Medal unless a SEAL also gets it.”

A source familiar with the matter told Task & Purpose the White House will officially announce Chapman’s medal after Slabinski receives his on May 24.

And in an article published by Newsweek just hours before the White House announced Slabinski’s decoration, journalist Sean Naylor detailed the disturbing lengths that some in the SEAL community went to, not only get the Medal for one of their own, but also to bag on Chapman’s in the process:

What has shocked and angered some sources familiar with the battle is that Mattis has also recommended the same award for then–Senior Chief Petty Officer Britt Slabinski, the SEAL team leader who allegedly left Chapman behind. Some special operators blame Slabinski for not only Chapman’s death but also the lost lives of six other special ops on the mountain. Others say it’s absurd to recommend someone for the Medal of Honor for his bravery in a fight in which he left a teammate behind, albeit by mistake. Informed by a Newsweek reporter that Slabinski was in line for a Medal of Honor, an Army special operator who took part in the operation was aghast. “You kicked me in the nuts when you told me that,” he says. Mike, a former Air Force targeting analyst who monitored the Predator feed of the Takur Ghar fight in real time and re-watched it twice last year at the Air Force’s request, was similarly taken aback. “I’m completely shocked that the Navy is putting a package up.”

Some observers are angry at the Navy for even recommending Slabinski for the award, which they claim was part of a campaign to sabotage the Air Force’s effort on behalf of Chapman. Such a campaign would be unprecedented, according to military awards expert Doug Sterner. “I cannot think of a single instance in which one branch of service opposed a Medal of Honor for another one,” he says.

Beyond the Medal of Honor politics playing out in the foreground, some critics have questioned other facets of the battle.

First, there was the decision to land directly on the mountaintop. Slabinski’s plan was to land at the base of Takur Ghar and then hike up to the top, which is in keeping with solid tactics that would have put the team at far less risk. But, he told The New York Times, maintenance delays and pressure from his leadership led him to nix the safer approach and go straight to the top.

Around 3 a.m. as they prepared to deploy, the operators’ aircraft got peppered by enemy fighters’ machine-gun and RPG fire. In the chaos, as hydraulic fluid littered the helicopter’s ramp, SEAL Petty Officer Neil Roberts fell out into the snow. The pilot, struggling to keep the aircraft aloft, pulled away from the peak and crash-landed about four miles away.

About two hours later, Slabinski’s team returned to the peak in a different helicopter to try and rescue Roberts. Now on the ground, Slabinski and Chapman immediately engaged an al Qaeda bunker, then Chapman was hit by gunfire and went down.

At this point, Slabinski told the Times, he looked over and didn’t see movement from Chapman’s infrared aiming laser, and assumed he was dead. Under heavy fire and with grenades going off, he made the difficult choice to fall back. For some, especially in the Air Force, that meant Slabinski left a man behind — an unthinkable act. But others, including Chapman’s sister and even some combat controllers, believe it was simply fog of war.

While the SEALs eventually made their way down the mountain to be rescued by helicopter, confusion within the chain-of-command and poor communication led to a Ranger quick reaction force going straight to Takur Ghar — where two helicopters had already endured blistering enemy fire. That QRF helicopter was shot down by a rocket-propelled grenade, and in the daylong battle on that peak, five others were killed.

As Naylor wrote, “Army and Air Force special operators blamed their losses on poor decision-making by the SEALs. Some members of Chapman’s unit, the 24th STS, were so upset that they tried to avoid assignments with SEAL Team 6, says a former Delta Force operator.”

In the investigations that have played out in the years since, it turned out that Chapman wasn’t dead, but apparently knocked out during the initial mountain assault. In surveillance footage analyzed pixel-by-pixel some years later, he came to and fired at al Qaeda positions, alone, for nearly an hour. And as he heard the QRF helicopter coming in, he emerged from a bunker to provide covering fire.

“It was really grainy. But there was still somebody up there fighting, and you could see that,” Kenny Longfritz, Chapman’s first sergeant at 24th STS, told me of the Predator drone footage he viewed after the battle. There was no doubt in his mind, and the minds of many others in the squadron, that it was John.

The SEALs, however, maintained there was no way Chapman could have been alive and put up “bureaucratic roadblocks,” according to Naylor’s reporting. While acknowledging that Chapman was a hero worthy of an award, Naval Special Warfare opposed the Air Force pushing for it based on events after the SEALs left the mountain.

It will be interesting to see how the final language of both awards turns out. Air Force combat controllers will no doubt be curious to see how Slabinski’s actions are characterized. They and the SEALs will likely never agree on how Chapman should be described in his citation: Will he be recognized for what he did alone and surrounded on Takur Ghar, or only for what he did before?

“There should be no controversy here,” Doug Sterner, an expert on military awards, told Newsweek. “Awarding both of these men the Medal of Honor does nothing to take away from the prestige of the award and everything to highlight the true heroism of two very, very dedicated servicemen.”

There shouldn’t be any controversy there. But sadly, there is.