WWII Marine Gets His Dying Wish: To Meet Up With A Fellow Guadalcanal Veteran

The internet: The home of trolls, angry comment sections, fake news, and Nigerian prince email scams. With all this going... 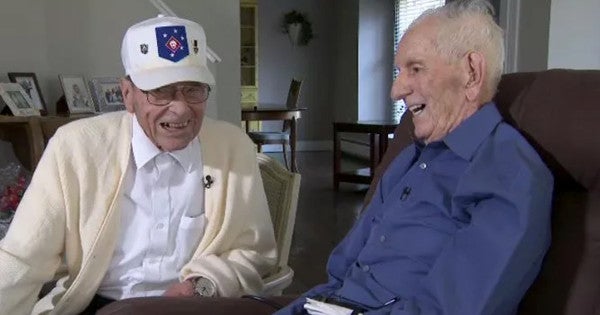 The internet: The home of trolls, angry comment sections, fake news, and Nigerian prince email scams. With all this going on it can sometimes feel like the world wide web is a mostly nasty place beyond redemption.

And then social media goes and connects two World War II veterans of the same battle… AND TOTALLY REDEEMS ITSELF.

A few weeks ago, Washington Post Editor Andrew deGrandpre shared on Twitter a message from the New York American Legion, which explained that a 96-year-old veteran currently in hospice care had a final request of speaking with someone else who fought in the Battle of Guadalcanal.

Former Sgt. Bill Hession, a Purple Heart recipient who was shot three times and stabbed with a bayonet during the campaign, was “fixated on talking to someone that this specific shared experience,” his hospice caregivers said.

deGrandpre's tweet said simply, “do your thing, Twitter,” and 9,000+ retweets later, it seems to have done the trick.

Former Sgt. Harold Berg became aware of the post, and immediately hopped on a plane to New York City and then headed to Hession's home in Rockland County, N.Y, according to CNN.

Berg, who also received the Purple Heart in that same battle, came into the room where Hession was sitting in a chair. The first thing he said: “Dag gally, a leatherneck!”

The men were able to share stories of the battle and talk about their lives. Berg told him his wife of 71 years had died two years previous, while Hession said he had been married for 55 years before his wife had passed. Hession also recounted his wounds during combat, to which Berg replied, “Boy, you're lucky to be here.”

But words don't really do it justice. You really need to watch the video: