Dogs have been a staple of military life for ages, but in recent years, military working dogs have captured the... 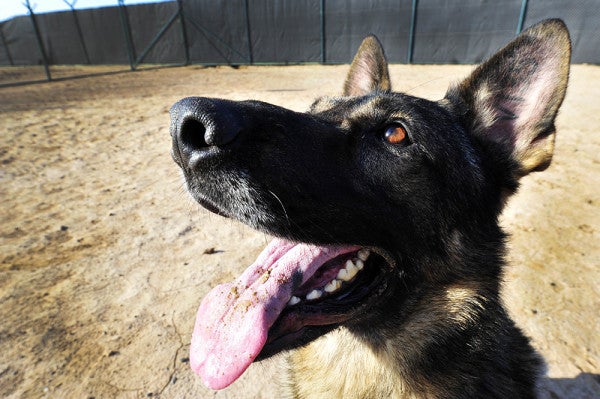 Dogs have been a staple of military life for ages, but in recent years, military working dogs have captured the attention of countless Americans, and for good reason. There’s Cairo, the Belgian Malinois that accompanied SEAL Team 6 on the infamous May 2011 Osama bin Laden raid. And of course, there are the countless other military working dogs who supported their handlers in Iraq and Afghanistan and continue to “pull security” on military bases across the globe.

Here are 10 photos that capture the loyalty, strength, and courage of our four-legged companions.

1. They start small, and cute.

2. Then they get big, but they stay cute.

Wilbur, a U.S. Marine Corps military working dog with a Marine special operations team, takes a break with his handler after successfully searching a build site for an Afghan Local Police checkpoint in Helmand province, Afghanistan, on March 30, 2013.

3. They’re war dogs through and through.

A flight medic with 2nd Battalion, 3rd Aviation Regiment, is hoisted into a medical helicopter with Luca, a military working dog, during a training exercise, at Forward Operating Base Spin Boldak, Afghanistan.

5. And they aren’t scared of the water. Clearly.

Staff Sgt. Erin Sims and Zoran, a military working dog, advance toward a decoy suspect during water training on Oct 15, 2013 in Tampa, Florida.

7. They are a serviceman’s, or woman’s, best friend.

Carly, a security forces K-9 with the 332nd Expeditionary Security Forces Group is sedated to have blood drawn, July 3, during a canine blood drive at Joint Base Balad, Iraq. Just like humans, this life saving contribution can be used for another K-9 of the same blood type when needed.

10 And they stick with their buddies on and off the battlefield.

August O’Neill is kissed by his service dog, Kai, on April 9, 2014, during the cycling portion of the Air Force Trials at Nellis Air Force Base, Nev. O’Neill, an Air Force wounded warrior, competed in the 6-mile men’s handcycle heat with four others.