12 Service Members Who Could Be Awarded Medals Of Honor

A Medal of Honor is the highest award for valor in action against an enemy force that a U.S. service... 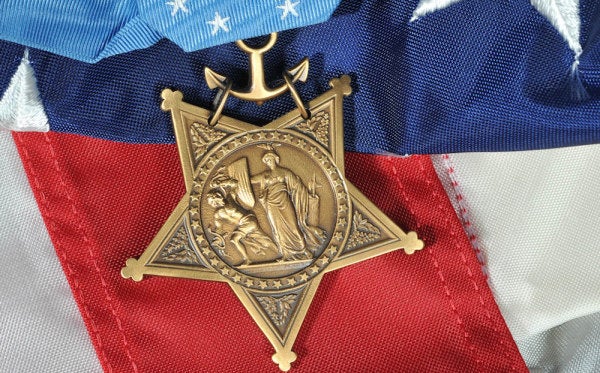 A Medal of Honor is the highest award for valor in action against an enemy force that a U.S. service member can receive. And while that honor should be reserved for bravest, most selfless among our troops, sometimes, it seems as though awards process misses in the mark.

The number of people who have earned the Medal of Honor in the Iraq and Afghanistan Wars is relatively low. Comparatively, the Vietnam War awarded 258 Medals of Honor, and World War II had 464.

Earlier this year, the Defense Department announced that it would be looking into its evaluation for valor awards. As a result, thousands of service members and veterans previously awarded will be considered for medal upgrades.

In honor of National Medal of Honor Day, here is Task & Purpose’s list of service members that could be awarded a Medal of Honor.

On Jan. 23, 2002, Pryor's company was ordered to perform a raid on two compounds suspected of harboring Taliban and al Qaeda terrorists in the mountains of Afghanistan. The team's position was compromised, and the unit was separated in the confusion. Still, Pryor and one of his teammates kept moving forward from room to room. They began to enter a room together, but another enemy soldier outside the room distracted the team member, so he stayed outside to return fire. In the fight, Pryor single handedly eliminated four enemy soldiers, engaging one in unarmed combat. He sustained a broken clavicle and a dislocated shoulder, but managed to be the only one of his comrades hurt in the raid. For his bravery, he was awarded the Silver Star Medal.

During Operation Phantom Fury on Nov. 10, 2004, Adlesperger entered a house in Fallujah, Iraq. His unit was taking on heavy fire, which instantly killed its point man, injured another Marine, as well as the platoon corpsman. Despite being hit with fragments from an enemy grenade, Adlesperger managed to single handedly reach a stairwell and move them the rooftop for medical evacuation. He returned to the scene to take out the enemy, which helped to clear the last insurgent strongpoint. Adlesperger was fatally shot on Dec. 9, 2004, in a separate incident when he was helping clear another house. He was awarded the Navy Cross for his actions on Nov. 10, 2004.

On Nov. 14, 2004, Coffman led Iraqi special police commandos through an ambush that led to a five-and-a-half hour battle against terrorists trying to overrun a police station. He led troops to aid a commando platoon under attack at a police station in Mosul. The compound was under intense rocket-propelled grenade, mortar, machinegun, and AK-47 fire by a large insurgent force. Coffman kept fighting even after a bullet smashed through the palm of his left hand, blowing up his rifle. He then picked up an AK-47 from a dead commando, and continued firing with his right hand. After hours of fighting, Stryker wheeled combat vehicles from the 4th Infantry Division arrived to secure the scene. He was awarded the Distinguished Service Cross for his actions.

Having shown selflessness many times over the course of his career, Burger’s final act of heroism was a true testament to his character. Though he had been badly injured and evacuated just three days prior to his death, he immediately returned to his unit. During a firefight on Nov. 14, 2004, Burger found a house guarded by insurgents with three wounded Marines trapped inside. Without regard for his own safety, he stormed the house to recover his comrades. Unfortunately, he fell to enemy fire and was posthumously awarded the Silver Star.

During Operation Phantom Fury on Nov. 15, 2004, Peralta and two other Marines with his unit were tasked with clearing houses. They made it through three, but were greeted with AK-47 fire upon entering the fourth. Peralta was injured in the attack. According to reports, the insurgents inside threw a hand grenade at the Marines, and the two Marines with Peralta tried to get out of the room but could not. Still conscious on the floor, despite his wounds Peralta supposedly pulled the grenade under his body to absorb the blast. He died instantly, sacrificing himself to save the lives of his fellow Marines. Despite a Medal of Honor recommendation from 1st Marine Division commander Lt. Gen. Richard Natonski, Peralta was posthumously awarded the Navy Cross. Several appeals have been made to upgrade his valor award, but all have been unsuccessful.

Related: The military needs to get a handle on its awards process »

On Oct. 17, 2005, Cashe’s unit was on patrol in a Bradley Fighting Vehicle when an improvised explosive device detonated near his vehicle in Samarra, Iraq. The blast, which broke through one of the truck’s fuel lines, ignited a fire. Though his uniform was soaked with gasoline, Cashe began pulling his comrades out of the vehicle, managing to save six and the body of their interpreter. In the process, he caught fire, but was tenacious in his efforts to save his fellow soldiers. After suffering severe burns to most of his body, he remained behind to insure everyone else was evacuated safely. He succumbed to his wounds on Nov. 8 at Brooke Army Medical Center, Fort Sam Houston, Texas. He was posthumously awarded the Silver Star. Col. Gary Brito, Cashe's former battalion commander, spent years trying to get his valor award upgraded to a Medal of Honor.

Witkowski, or Ski as he was fondly known, was part of the 729th Transportation Company. The unit was on patrol in Iraq on October 26, 2005 as part of Operation Iraqi Freedom when an improvised explosive device rocked his convoy. Insurgent forces then advanced, hidden behind a berm on the left side of the road attacked with rocket-propelled grenades, small-arms fire, mortars and armor-piercing rounds. Witkowski fired back, and when an enemy hand grenade was lobbed, he absorbed the full shock of the blast and saved the lives of his fellow soldiers. He was posthumously awarded the Silver Star.

Two Marine infantrymen stared down a truck carrying 2,000 pounds of explosives as it barreled towards a Ramadi post on April 22, 2008. With more than 150 Marines and Iraqi police inside the perimeter the truck stopped just shy thanks to Yale and Haerter. Unfortunately, in taking out the driver and stopping the truck, the explosives inside detonated and killed the two Marines. Haerter and Yale were posthumously awarded the Navy Cross for their actions, which were later recounted by Iraqi police present that day and captured on a security camera.

While assigned as a combat controller of the 21st Special Tactics Squadron, Gutierrez and his team conducted a high-risk raid to capture the second most powerful Taliban leader in the region on the night of Oct. 5, 2009. The squadron was met with a barrage of firepower, and were completely outnumbered by insurgents. Though he was shot in the chest, Gutierrez had medic jam a syringe into his chest. Though his lung was collapsed, the syringe made it so that Gutierrez could coordinate airstrikes to fend off Taliban fighters and call in an evacuation helicopter. He reportedly lost nearly half his blood, but survived and is credited with saving the lives of a dozen soldiers. He was awarded the Air Force Cross for Valor.

When a group of Afghan special forces soldiers came under enemy fire in Badghis province, Afghanistan, on July 29, 2012, Marine Special Operations Command Chief Gifford came to their aid. His citation reads, “Without hesitation he mounted an All-Terrain Vehicle and crossed 800 meters of exposed ground, performed first aid and, with the help of another Marine, moved the causalities several hundred meters to a protected landing zone for medical evacuation.” In continuing to aid commandos, Gifford took out an insurgent firing from a window before climbing on top of an insurgent building and dropping a grenade down the chimney. He continued returning fire at the enemy until he fell mortally wounded. He was posthumously awarded the Navy Cross.

A car bomb breached FOB Ghazni in Afghanistan on Aug. 28, 2013. After the explosion, al Qaeda fighters launched an assault on the base that involved grenades, mortars, rockets and at least 10 suicide bombers. Fighting beside Polish Lt. Karol Cierpica during the attack, Ollis was killed when he moved to shield Cierpica from a suicide bomber. He was posthumously awarded the Bronze Star, the Purple Heart, the Silver Star and the Audie Murphy Medallion, as well as the Polish government's highest military award: the Polish Medal of Honor.