In 2010, John Kael Weston came home after seven years as a State Department official and advisor in Iraq and … Continued 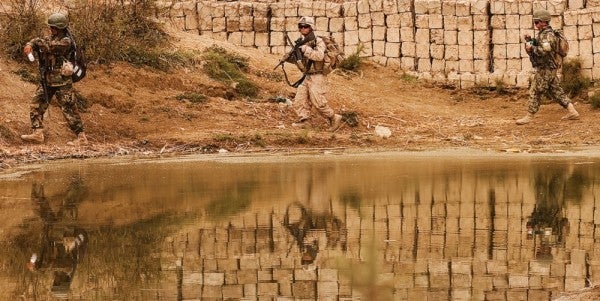 In 2010, John Kael Weston came home after seven years as a State Department official and advisor in Iraq and Afghanistan. Over the next two summers, he visited 31 gravesites across the United States.

The graves belonged to Marines killed in a January 2005 helicopter crash in Iraq. A State Department official in Fallujah at the time, Weston advocated for additional military support in locations away from major population centers. The 30 Marines and one Navy Corpsman killed were enroute to provide security for the elections.

The tragedy has stayed with Weston for years and is detailed in his war memoir, called “The Mirror Test: America At War In Iraq And Afghanistan,”

In the book, Weston refers to the fallen as “31 Angels,” a name used in military communications to refer to American troops killed in action. Of the 31, some returned home to large metropolitan cities, but others were laid to rest in small towns, like Menard, Texas, which has a population of 1,412.

“The Mirror Test” is a deeply personal narrative that looks critically at American wartime policy by depicting the human cost of enacting it: American, Iraqi, and Afghan lives lost. The memoir spans the breadth of Weston’s wartime service from 2003 to 2010, when he spent seven consecutive years in places like Sadr City and Fallujah, Iraq; and Helmand and Khost provinces in Afghanistan.

Task & Purpose spoke with Weston about his experiences at war and how reflection, while crucial, is only a half-measure toward understanding and addressing the consequences of our actions.

Do you think we as a nation are in need of a catharsis after the wars in Iraq and Afghanistan?

I think catharsis is not the word I would use. I think reckoning is the word I would use. I’m not sure I’ll ever get a truly cathartic experience after Fallujah. Unless I go back to Fallujah one day and I have no armor, and no guards, and no rifles around me, and the Fallujans are eating kebabs happily in their shops. I think how we get to catharsis is reflection and reckoning.

Why is it important to know not only what service members did, but also what the Iraqis and Afghans went through during both wars?

I think the ultimate judge, the ultimate mirror test should come from them. To take the mirror and hold it in front of us. We should try our best to see the wars from their perspective. They still live with the wars every day. Our warfront is their homefront. We invaded their countries.

What I try to do in my book is to show a balanced perspective, which is in a place like Fallujah, where the biggest battle of the Iraq War happened. Not only what that first part of that story was — which is a tremendous amount of bloodshed and violence — but also what followed the rebuilding … Similarly in Afghanistan I wanted to try and show: “Okay, if you were an Afghan and the Americans showed up in Helmand province, what would you do? Would you stand by and watch or would you actually collaborate or partner with them?”

As a civilian that was easier for both peoples, because I didn’t carry a weapon, I wasn’t in uniform. I represented the U.S. government, I represented, I think ideally, a more normalized relationship. For our military, whether you were a general, a captain, a colonel, or a corporal, I think it was much harder for you to have the first impression with the local population that maybe you wanted, just because you represented American hard power.

You stayed forward almost continually for seven years. Did this allow you to accomplish things that U.S. troops simply couldn’t due to deployment tempos?

Yeah, I’d take Fallujah as a case study. I stayed in Fallujah, not because I was a fan of day-to-day life in Fallujah. It was dangerous. It was hard. A lot of my Iraqi friends, a lot of my Marine and military friends, were getting hurt or killed. But it was a question of continuity and at least trying to make a bad situation better.

I knew that not only was I treating the war seriously from their perspective, I didn’t want them to have to educate the next political officer or diplomat on what was going on in Fallujah. The flip side of it was I became much more effective at what I trying to do. … I think the military rotations are what they are. I don’t think realistically that we’re ever going to revert to a World War II scenario, which is corporals and captains were sent off to the Western front and just stayed, and stayed, and stayed. … Even though the battalions were rotating, there were some pretty good handoffs between the commanders and civil affairs teams. But the advantage of staying is you get better knowledge of your neighborhood than just about anyone.

Why should the average American care about Iraqis and Afghans?

Well, I care about them because without them these wars would have been a heck of alot worse. So they were, I think, the bravest in these wars. I worked with a lot of brave Marines and soldiers, there’s nothing against that, but the bravery that you had to show as one of our partners in either war is something that people should appreciate.

I also think to do right by what happens in a warzone, your story in the first draft will understandably be about us, but I think the deeper analysis and the deeper tale is maybe: Who was the mayor of Fallujah? Who were the city council leaders? Who was the engineer that showed up every day of the week to help put the sewer line back together? Who were the mullahs and imams who preached moderation, or could have, if not addressed correctly or carefully, preached discontent toward us?

Those I think are the best stories of these wars because they’re showing the warfront from a different angle, which is not our tanks, and not our dollars, but how in a counterinsurgency environment, which is what these wars have been defined as, are really determined by them more than by us.

When you see people at their most vulnerable in war, what’s the effect of that?

When you see people at their most vulnerable and you see how frail we all really are, you can be the toughest Marine in the Marine Corps, but at the end of the day, going to some of those memorials where a sergeant, a corporal, or a captain has lost their best friend, it’s a pretty stark reminder that a human body is pretty weak inside of all that armor and the human spirit is tested in war in a way, I think, that perhaps has some parallels in the non-war life, but I’m not so sure.

The vulnerability, the humanity of war is also still there. So, even in the reddest days of Fallujah and the darkest days in Helmand, I did see humanity that is real and that was the partnerships that I saw between the Iraqis and our military, the bravery of the city council members who would stand up a day or two after the person sitting next to them had just been assassinated and they had no Hesco barrier protection, they had no armor, no up-armored humvees, any of the things that we did. While war produces the worst of the world, within all that black, there are some real tremendous reminders that war can sometimes bring out the best as well.