“M,” an Army veteran who deployed with Army Special Forces in the 1980s, cries when I ask her what she... 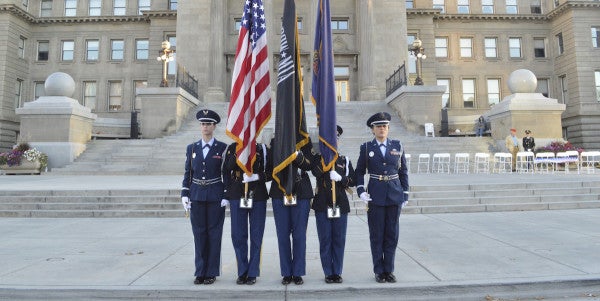 “M,” an Army veteran who deployed with Army Special Forces in the 1980s, cries when I ask her what she thinks the public should know about women veterans. She wipes tears from her eyes and laughs that she had put on mascara just for our interview. “Really, nothing different than male veterans,” she tells me, smiling and weeping at the same time. “We’re veterans. We served. We wore the uniform, and we were there to do our country’s bidding and we did it. … I think all veterans deserve that recognition and acknowledgement of service.”

Over the past year, I interviewed dozens of women veterans for my master’s thesis, exploring links between women’s experiences on active-duty and their self-identification as veterans.

Despite the differences in rank, branch of service, ethnicity, sexual orientation, and age, the women I spoke to all shared the desire to have their service recognized. They cited exhaustion with the fact that women, who comprise approximately 15% of all active-duty forces and over 20% of new recruits, are constantly overlooked by their own communities, including by institutions that are specifically created to support veterans. The gap in access can have tragic effects: A recent report noted that women veterans have a 250% greater risk for suicide than civilian women, and they are the fastest growing homeless population in the United States. Several of the women I interviewed had experienced military sexual trauma, suicide attempts, and periods of homelessness after leaving the military. Yet, despite these harrowing statistics and experiences, most women veterans, including the women I interviewed, are thriving. There are 2.2 million women veterans in the United States — 10% of the overall veteran population — and they want to be visible.

I want to help make women veterans’ military experiences known through collective storytelling. While in the military, we were often the only women in our units, we felt like we were the only ones who grit our teeth and endured a boss who sexually harassed us, and we were retaliated against when we reported misconduct. We were ashamed of service-connected health issues that affected our reproductive health. But, we were also enormously proud to have served overseas, to have taken the oath to serve in the military, as soldiers, sailors, airmen, and Marines. I specifically asked women veterans what they think the public should know about women veterans. Here is what some of them said:

A veteran is a veteran, no matter their gender.

Women veterans simultaneously don’t want to be seen as “different” from male veterans because they are women, yet understand that the public still doesn’t recognize their service because of their gender.

One Air Force veteran noted that she doesn’t like specifically calling herself a “woman veteran” because “we’re just veterans.”

Several women veterans noted that they can’t stand license plates, bumper stickers, hats, or t-shirts that specifically say “woman veteran,” but most agreed that they understood the necessity. Without the “woman” modifier, these veterans are asked if their husband served.

Navy veteran Kate Kranz Jordan, an aviator who spent a year in Afghanistan, echoed this sentiment, “Women wear the same uniform as male veterans. A veteran is a veteran.”

There are currently over 300,000 female combat veterans in the United States. In some cases, the acknowledgement that “a veteran is a veteran” means accepting that all service members, both women and men, are exposed to the same hazards. Lisa Rosen, an Army veteran attached to a Special Forces unit in the early 90s, explained, “There are an awful lot more women who have been exposed to the dangers of combat and thrived than the public will ever know about or they get credit for.”

Women veterans do not want to be treated as if they are the “same” as male veterans, but rather have their specific experiences equally considered. But because women veterans have had a different experience than their male peers while wearing the uniform, this also affects their lives after military service.

Elena Giordano, a Navy veteran and military sexual trauma survivor who fought for years to receive veterans benefits, explained, “Our experience, for a lot of us, was worse than one could ever imagine. It’s a job you can’t just quit in two weeks, that the issues you experience there are unique to that environment. We need more recognition and support, especially from the public.”

Navy veteran Allison Adams-Jones reflected that serving as a woman exacerbates the already high-stress, high-stakes nature of military service because the system — including military equipment — is built by and for men. Adams-Jones, a supply officer, tried to obtain female body armor for her reserve unit’s 2011 deployment to Afghanistan. Her unit’s base was directly attacked during the deployment. She now has permanent neck and back damage from the ill-fitting equipment.

Women vets are held to a higher standard, but given less support.

While serving, women in the military constantly have to prove themselves, but aren’t even given adequate tools to do so.

“I wish that the public understood that women veterans had to deal with so much more,” Adams-Jones reflected, “Women have to perform at such higher standards to get the same recognition, or probably less recognition. Then you’ve got to wear body armor, but it’s not made to fit your body. God forbid we make gear for women, because women aren’t in combat positions. I remember thinking that as bullets were going by.”

Women veterans rise to all challenges.

Despite these challenges, the story of the American women veterans is one of resilience and quiet power, which Marine veteran Dr. Kate Hendricks Thomas calls “resilient leadership.”

“A”, a Marine veteran, volunteered for a Female Engagement Team deployment to Iraq in order to escape a unit where she had been sexually assaulted. Her deployment was marked by a feeling of empowerment for volunteering for combat alongside more women than she had ever served with, while also facing continuous harassment and ostracism by their male teammates. When I interviewed her, she wept as she proudly proclaimed of her sisters in arms, “They’re amazing. They’re usually talented, even more than the general public. They’re relentless and pursue whatever they choose to do, and have the track record to prove that.”

This Veterans Day, consider Army veteran Malia DuMont’s perspective on what the public should know about women veterans, “There are more of us than we realize. We come from all walks of life. We exist.”