6 Lessons Being A Military Pilot Taught Me For Life

Being a military pilot has some skills that cross over to regular life and some that don’t. In daily life, … Continued 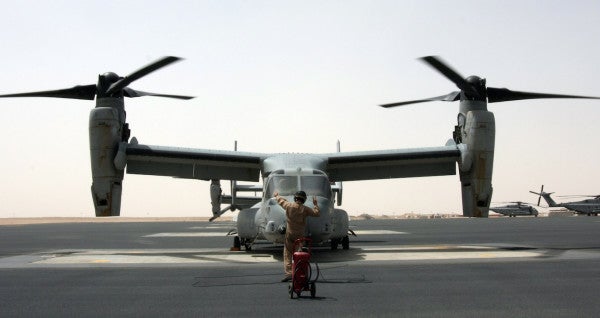 Being a military pilot has some skills that cross over to regular life and some that don’t. In daily life, I have only an average sense of direction, for example. When my ex asked how I got lost on a drive when I could navigate a multi-million dollar aircraft just fine, my only explanation was,”In my aircraft I don’t have someone shouting in my damn ear.”

At the same time, 20 years of flying aircraft like the CH-46E Sea Knight and the MV-22B Osprey does teach you a couple of things. To name a few:

Whether things are going really well or really poorly, you need to concentrate on what’s important first. In an aircraft, the most important thing is to keep it flying, in my case that means keeping the rotor side up and the wheels side down. Until you’ve got that under control, don’t even worry about anything else. Then you can start to navigate, figuring out if you are where you need to be and making corrections to get on course.

Only after all that’s done should you try to tell anyone about it. As another cliché goes,”Don’t drop the airplane to fly the microphone.” On the ground, at perhaps the most literal level, this means don’t crash your car while texting your friends to tell them you’re coming. But there’s a broader ramification, especially in today’s communication- and media-driven world — we often worry more about when and how we’re going to tell people about what we’re doing than actually doing it.

2. The most useless things in aviation are the altitude above you, the runway behind you, and the fuel you left in the truck.

While flying, a lot of times it’s easier or more fun to fly lower than safety dictates — altitude being important for both avoiding obstacles and for glide distance. When running behind, it’s easier and faster to avoid topping off the fuel tanks or to accept a takeoff beginning at a taxiway halfway down the runway instead of all the way at the end. 999 times out of 1000, that’s no big deal, but on that 1000th flight we have an engine failure or need to circumnavigate bad weather and we realize we should have done things the right way instead of the easy way.

Oftentimes, due to sloppiness or laziness, we decide that it’s no big deal that we’re taking a shortcut. If there’s a right way to do something, it’s probably that way for a reason. Do things the way you were taught and the way you planned them before you got in a hurry. There’s a reason you have to thaw the turkey before frying it.

Related: I wrote a letter to my 18-year-old self about joining the military.

People are fallible. They forget things, they get tired, they get distracted. That’s why pilots always follow checklists for important procedures in the aircraft. Even the simplest tasks are broken down by steps so that nothing important is forgotten. If you do important things the same way every time it will help you do things correctly, but it will also help you realize when something is amiss. In the Osprey, I checked that all the landing gear lights came on every time, so that the time my copilot didn’t put them down we caught it. On the ground, if you pack your bag the same way for every trip, you’ll be a lot less likely to forget to pack that charger you need.

There’s a commonly cited statistic that it takes 10,000 hours of practice to master a skill. Whether 10,000 is the right number or not, pilots are always trying to get more flight hours than their organizations can give them. So pilots will practice every aspect of the flight that doesn’t involve the actual airplane, so that when they get to the plane, they can just worry about the actual flying.

Some student pilots will even sit in chairs, mentally walking through a flight while moving their hands and feet just as in the aircraft. In flight school, my roommates and I spray-painted the NAS Corpus Christi runway diagram onto the back lawn of our house so we could practice how to enter the pattern and make radio calls. This principle works for anything. You might not be able to perfectly simulate your next meeting or presentation, but you can talk yourself through it, or at least close your eyes and visualize each step of what you do.

5. Know what you’re going to do when things go wrong.

Knowing your emergency procedures is a huge part of aviation training. Questions like “What would you do if your engine failed right now?” or “What would you do if your oil pressure was at 20 psi?” are constantly peppered at students. Pilots memorize basic steps for almost anything that might go wrong. Eventually, pilots start asking themselves these questions as they fly. A pilot who constantly asks himself,”If my engine failed right now, where would I land?” actually improves the way he flies during normal operations because he is constantly making himself ready for the worst case.

In everyday life, think about what could go wrong. Don’t let that stoke a panic attack. Instead, figure out solutions and keep them in mind. If you know you can handle the worst case, that confidence makes everything easier. You are at ease while waiting to give your presentation because if your computer goes down, you know you’re ready to do it off a whiteboard. If your car doesn’t start, you aren’t panicking because you already know which of your coworkers lives closest, and if that doesn’t work you already have the train schedule linked on your phone.

Most pilots have some kind of preflight ritual or pattern. They check their survival equipment and they do a preflight inspection, or “walk-around” of the plane. You don’t have to waste hours, but taking a moment to check things before you use them pays huge dividends. As a pilot, you are literally being held thousands of feet in the air, traveling hundreds of miles per hour, by millions of parts working in unison that are built, inspected, and fixed by other people. It’s a good idea to check their work. Even if they’re good, they usually aren’t the ones riding in it, and there’s no interest like self-interest. I’ve found plenty of things wrong with aircraft that could have led to outcomes from inconvenience to catastrophe if I hadn’t checked.

So many problems are easily avoided by just checking your things over before you start. Turn on your laptop and make sure the projector works before your boss arrives for that presentation. Pack, or “preflight,” your briefcase so that you aren’t looking for a pen and paper like a buffoon when you go to an interview.

British aviator A.G. Lamplugh once said, “Aviation in itself is not inherently dangerous. But to an even greater degree than the sea, it is terribly unforgiving of any carelessness, incapacity or neglect.” Pilots may be insufferable at times, but we do live in an environment that frequently seems to be trying to kill us. You may not ever fly an Osprey full of troops on a low-level flight on night vision goggles, but lessons drawn from those experiences can still make your life a little better.