8 Things I Miss About The Marine Corps

It’s been just over three years since I left the Marines and while I don’t regret my decision to leave, I’ve come … Continued 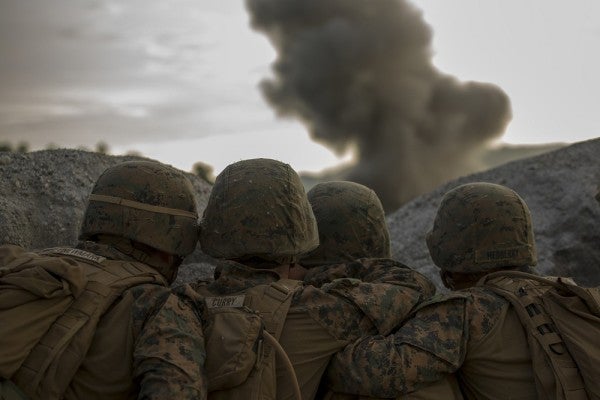 It’s been just over three years since I left the Marines and while I don’t regret my decision to leave, I’ve come to realize that there are aspects of my military service that I miss. I served from 2008–2012 as a combat correspondent, and during my time in I spent two deployments in Afghanistan with 1st Battalion, 6th Marines.

Though I’m happy being back in the civilian world, leaving the Marines was somewhat bittersweet. Don’t get me wrong, I love being a “nasty civilian,” but nothing will ever replace the experiences I had, lessons I learned, and friendships I made in the Corps. Sometimes it feels like I’ve swapped a shared sense of purpose for individual freedom, and in some ways, that’s true. Military service is just that: a service to your country. Your needs and wants come second to the mission and to your fellow Marine or sailor’s well-being. But, there’s also a common sense of belonging that is made strong by a shared mission. That’s something that often feels missing from civilian life.

The Marine Corps’ 240th birthday is a time for current and former Marines to reconnect, share a beer, and reflect on their service. As I take stock of where I was and where I am now, there are some things I won’t miss about being an active-duty Marine — like field day inspections — but many more that I will.

Here are eight things that I miss about being in the Marines.

Due in part to daily physical training and the peer pressure to not be a weak or fat body, staying in shape, or at least not being out of shape, was kind of a breeze. It wasn’t until I left the Marines that I fully understood just how much of an impact those daily 5 a.m. runs actually had on my physical fitness. Of course, it took me a while to realize that it’s not such a good idea to subsist entirely on pizza and beer without some form of daily exercise to balance it out — or at least lessen the damage I’m doing to my body.

2. Always winning the “who has it worse” contest.

There’s a sense of pride in being a Marine that borders on fanaticism, and a large part that stems from the Marine Corps’ relationship with adversity. From boot camp onward, we’re taught to take pride in hardship. Marines are probably the only service members who will loudly and proudly defend their claim to having the worst lot. From hand-me-down weapons and gear, to daily ass chewings, the unofficial motto is: If you’re not suffering, you’re not doing it right.

3. Friday nights at the barracks.

Yes, as depressing as it is to admit it, I miss Friday nights at the barracks. Every other day of the week, the barracks was a miserable place. But on a Friday night, with work behind you and a 12-pack and a fifth of rum for under $25, it was like stepping into National Lampoon’s “Animal House.” Drunken idiocy abounded.

It’s not something I need to go back to, but I’ll be honest, I have many cherished and hazy memories of hearing the drunken chant, “Fuck you, Tanks,” as I watched grunts and tankers hurl empty beer bottles back and forth between the barracks, or of standing out on the catwalk at 1 a.m. drunkenly singing Denis Leary’s “I’m an asshole” at the top of my lungs.

Not my proudest moments, but it’s not something I’d take back either. Though, I could have done without the head-splitting hangover that came the morning after.

Marines with Corporals Course class imitate an instructor’s teaching methods during physical training sessions as part of a skit for their mess night here Aug. 23.

The military is a small and tight-knit community, and the Marine Corps is no exception. You live, work, and deploy together, and in doing so, you develop your own small-unit culture, which usually includes a bunch of private little jokes between you and those you serve with.

My friends and I once spent an entire day speaking in nothing but movie quotes because everybody in the public affairs shop had seen all of the same movies and understood all of the references. When our staff sergeant would ask if we had any saved rounds, at least one Marine would raise his or her hand and quote James Cameron’s “Aliens” saying: “Yeah, how do I get outta this chicken-shit outfit?

My deployments were the highlight of my service. That was the whole reason I enlisted in the first place: to go to war. All the training, preparation, and hard work was focused on that one event. I feel like this is a sentiment shared by most people who enlisted after Sept. 11, 2001. We joined because there was a war on, and we wanted to be involved and to contribute.

Your deployment was the culmination of your training and preparation. It was a chance to put everything you learned into play and it justified the sweat and hard work during training, because you were finally doing your job for real.

6. That period of time just before getting out.

There’s nothing quite like that feeling of invincibility you have right before you get out. For me, I felt like I was finally able to cash in on the good credit I’d built over the past four years and two deployments. I put in my time, performed well enough, and was getting out, so when I had just two or three weeks left, I felt comfortable ducking out of the occasional field day or dodging the company gunny’s angry knife hands.

There’s also that sense of thinking, “What’re you gonna do? By the time you can file paperwork on me, I’ll be out anyway.”

Though it wasn't often that I got to wear my “pickle suit” or service alpha uniform, I always loved it. I know that the dress blues are iconic, but personally, I think they make you look like a poorly dressed pimp — it’s a gaudy smattering of blue, black, red, white, and gold-plated buckles, buttons, and medals. It should come issued with baby powder.

But the service alphas make you look slick. It’s the world’s most badass business suit. It’s clean and neat, and every time I put it on, I wanted to pull a Ron Burgundy and call everyone over to see how good I looked.

While true for any branch and any veteran, the thing I miss most about being in the Corps are the men and women I served with. Whether you’re in for one enlistment or several, you build relationships and share a bond with your fellow service members unlike any other relationship in the civilian world.

The friendships I made in the Marines have outlasted almost all those from high school or college. There’s just something about the way that shared hardship, whether it’s during boot camp or a deployment, fosters and strengthens a relationship.