Perhaps the most telling thing about “Courage in Combat” lies in the upcoming book’s dedication: “To the select few who... 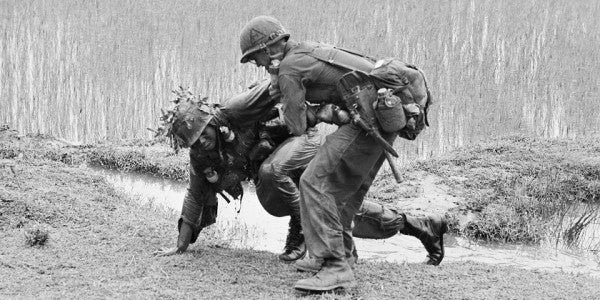 Perhaps the most telling thing about “Courage in Combat” lies in the upcoming book’s dedication:

Written by retired Army Lt. Col. Richard Rinaldo, the stories are drawn from a wide cast of characters, including Rinaldo himself, and stretch from today’s wars in Iraq and Afghanistan to as far back as the Civil War.

“Courage in Combat,” which comes out March 9, is a mix of letters and first-person accounts which are at times tinged with nostalgia, yet simultaneously harrowing and enlightening. It reads less like a collection of individual stories or anecdotes and more like a meditation on the effects of combat. Some stories deal with the debilitating sense of loss following the death of a friend, others investigate the almost fickle way that fear impacts some, paralyzing them, while it seems to have little effect on others, until after the danger has passed, and then comes rushing back.

The anthology was compiled in conjunction with the Legion of Valor, one of the oldest and most exclusive military service organizations in the country — to qualify for membership you must be a recipient of the Medal of Honor, a Distinguished Service Cross, A Navy Cross, or an Air Force Cross. Rinaldo, who in addition to being the president of the Legion, is also a recipient of the Distinguished Service Cross, which he received for his actions during his 1969 tour in Vietnam as an infantry officer. Rinaldo retired in 1989 after a career that spanned 25 years, two deployments to Vietnam, and numerous commands.

Rinaldo spoke with Task & Purpose about the central themes of “Courage in Combat” as well as his own observations about heroism, the allure of war, and how courage has changed in our most recent wars and the ways it has stayed the same.

Do you think battlefield bravery changes with time and do you think it’s different now than it was in World War II, Korea, Vietnam?

Yeah, there’s a lot of differences and then there’s some continuity. The continuity is facing the danger, the looking out for one another, making your best effort to accomplish whatever mission you’ve been given.

Do you think the way our most recent conflicts were fought — attacks often beginning with IEDs, ambushes, or engagements at a distance — left less room for the types of battlefield heroics of past conflicts?

The need for facing up to circumstances despite what they are always involves a certain degree of courage … A lot of people don’t like the idea that everyone’s a hero, but if you’re out on patrol and there’s IEDs and you’re in a vehicle convoy, and even if you’re just a transportation soldier, you’re putting yourself out there. Of course what choice do you have? You get courtmartialed if you don’t, but still, things happen and then you do the best you can and that’s a lot; doing the best you can. I believe it’s a lot … In particular I feel terrible about the guys today who had to go back for multiple deployments. Three, four deployments. To me, just staying in and doing that is heroic.

Not to diminish the accomplishments of those who were observed and recognized and given special awards and decorations, not to minimize that, but to also recognize that there’s a lot of other things going on that people are doing that are of a heroic nature. Then there’s a whole lot of people, who for whatever reason may not have been observed, written up, or given awards, but nevertheless served with great courage and heroism in a variety of roles.

Do you think awards complicate how we view valor, by putting a value on it or by putting the focus on one individual? For example, a lot of times when someone is recognized for their actions under fire, they’ll be the first ones to say, “Everybody out here did this too.”

Yeah. That’s what a lot of our members say. That it’s a team effort and a lot of guys doing a lot of things, and I’m singled out, but let’s remember that we were a team. A lot of guys say that the reason they even speak about their experiences is because they feel like they need to speak for the other guys too. They need to tell the story. Now I probably didn’t do that as well with my own story, but if you read all the stories in my book I think you’ll get it. I think there’s an interesting one about how some suffer in survival … a little bit of guilt. Survivor’s guilt I guess they call it. When you’re spared and others are not. Why was I given an award and others were not?

As a recipient of the Distinguished Service Cross, when people ask you about that I imagine it brings forth a flood of emotions, right? The fact that your story is now so public.

It does create a bit of anxiety and nervousness, and I felt that way even about doing this interview in that you’re not just talking about yourself, you’re talking about other guys and you want to represent them properly.

With young people, it’s like, why do you play football? Why do you play basketball? To test your mettle, your abilities, your competency, so to speak, to win, to overcome, to compete, and survive.

I think there are plenty of analogies, but you can’t explain it fully, and the other piece of this is — and Ty Carter said this too and I said it myself — young guys you go there and you go into combat and you think it’s going to be fun and games and maybe your first engagement you have the advantage and you kill all the bad guys, then on the next one, one of your guys gets hurt or killed, then there’s a certain sadness that kicks in. It’s no longer fun and games and I can tell you that’s the case when some kid is sitting beside you hollering for his mother.