Actor Stephen Lang On The Medal Of Honor: ‘It’s About Standing Your Ground’ 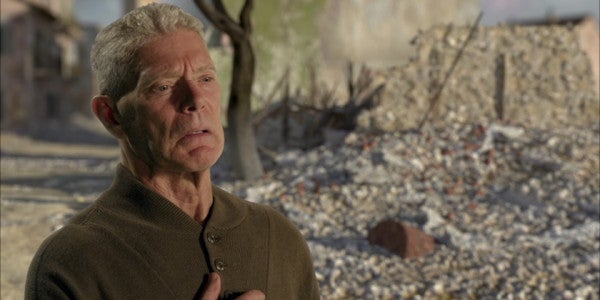 On Aug. 26, 1968, Staff Sgt. Nick Bacon was leading an infantry squad near the city of Tam Ky in Vietnam when they came under heavy fire from a bunker line. In the ensuing battle, Bacon led two platoons against the enemy, single-handedly eliminating a gun crew and four additional soldiers, and eventually turned the ambush around.

“I got my boot heel shot off, I got holes in my canteens, I got my rifle grip shot up,” Bacon recalled in “Beyond Glory,” Larry Smith’s 2003 best-selling nonfiction book about American war heroes. “I got shrapnel holes in my camouflage covers, and bullets in my pot. A bullet creased the edge of it, tore the lining off.”

Bacon earned the Medal of Honor, our nation’s highest award for military valor, that day — not for the men he killed, but rather for the men he saved. “Continuing to ignore the intense hostile fire,” his citation reads, “he climbed up on the exposed deck of a tank and directed fire into the enemy position while several wounded men were evacuated.”

That’s precisely what distinguishes the Medal of Honor citation from those of other military awards: its emphasis on humanity. The men who’ve been awarded the medal earned it because, under the most extreme circumstances, they either risked or gave their lives so others may live. It’s the ultimate symbol of altruism in war.

Actor Stephen Lang, who is best known for playing a military commander in both “Gods and Generals” and “Avatar,” never served in the military, but he saw in the stories of men like Bacon lessons that apply beyond the battlefield. In his one-man play, “Beyond Glory,” based on Smith’s book, Lang plays eight Medal of Honor recipients from World War II to Vietnam, including Bacon.

Lang has performed “Beyond Glory,” which he wrote, to critical acclaim in theater hubs like New York City, Chicago, and Washington, D.C., but, in 2005, he decided to go about as off-Broadway as an actor can go. He’s since performed the play in Germany, Italy, Korea, Guantanamo Bay, Iraq, Afghanistan, and just about everywhere else U.S. troops can be found around the world.

“The fact that I didn’t serve in the military is, incidentally, part of my motivation for me wanting to do this piece in the first place,” Lang told Task & Purpose. “It has to do with some desire to be of service in some way.”

With the film version of “Beyond Glory” (executive produced by James Cameron) now available on Video On Demand and Amazon, Task & Purpose spoke with Lang about his experiences performing for military audiences, what the Medal of Honor symbolizes to him, and whether we’ll ever see post-9/11 veterans featured in the play.

What inspired you to bring the stories of Medal of Honor recipients to the stage?

I’ve always enjoyed history and military history. So when Larry Smith brought the book to me I read it that day and it kind of floored me. Right away, it felt to me that these stories were just remarkable stories. They were just damn good stories. I sort of sensed that there were seeds of drama in them as well, because this was a piece of journalism, the book “Beyond Glory.” But I could just feel the drama and the possibilities for the theater in there. And I suppose I began to identify with these men — the specificity and the authenticity, just the genuine honesty of the way they told these stories. They became very vivid to me, and I just began to, in a way, channel them.

What does the Medal of Honor symbolize to you?

When you do something that no one would hold it against you if you didn’t do it, that’s an extraordinary thing. And I think in a military situation, it’s all the more dramatic because the stakes are immediate, and life or death. The qualities that are embodied by the Medal of Honor are ones I admire deeply and ones so fundamentally important for us, for society. They’re the qualities of courage, which is not merely bravery. Bravery is a great thing, but people can be brave for the wrong reasons. But there’s a deeper component to courage, sometimes a moral component. In the sense of the Medal of Honor, it really has to do with taking care of a situation where a lot of other people are being threatened, when somebody needs to step forward — looking out for the guy next to the guy, next to the guy, next to the guy, next to you. It also embodies qualities of fortitude, which is the willingness to withstand really, really tough circumstances and to not move backwards. To stand your ground. It also represents just a fiber — a really tough fiber of spirit. I think the guys have really wonderful cables of character. They have steel running through them. So, I suppose the Medal of Honor to me, it means, in many ways, the best of what a person can be, whether it be in the military or any other walk of life.

What is it like performing this play for a military audience versus a civilian audience?

I remember one time in Korea hearing a sergeant major say, “You will attend the theatrical performance of ‘Beyond Glory’ at 1600 hours and you will enjoy it.” That’s not necessarily the best recipe for success as an actor. So, you will sometimes get this incredibly upright, almost rigid audience. They’re there, they’re paying attention, and by god, they’re going to take this seriously and they’re not going to laugh. So I had to find a way to open it up and let the whole evening breath — to let them know that they’re not just there to observe, but, in a sense, that theater is a participatory thing in terms of energy and feeling. It’s a different performance. I enjoy doing it that way. I think it almost bears a relationship to stand-up comedy, but having nothing to do with comedy, per se. It always is a singular experience because the military audience has not seen anything that’s quite like this before. I got to say that I can’t recall a time when they weren’t deeply appreciative and deeply responsive, and many of them anxious to express something afterwards to me.

Has your perception of the military evolved over the decade you’ve been performing this for service members?

My perception of the military started out as one of admiration and respect, and, possibly, a sense of idealization. My youth was spent really watching the war films and TV shows that were made in the 40s and 50s, where there was an aspect of idealization and certainly of romanticism of the military. For example, my favorite film, “The Bridge on the River Kwai,” it emphasized the adventure. Now, having spent a lot of time on our military bases, ships, and camps, I’ve seen the day-to-day routine of it. If it is an adventure, it’s an adventure that’s interspersed with lots of moments of inactivity and just sort of routine behavior. But that didn’t come as a surprise to me in any way. I think what I’ve gleaned is that it’s the kind of life that appeals to me with the structure of it, the discipline of it — I like that. It’s a way I could’ve conceivably lived. Really, my perception of the military has only, I’d say, deepened, and so has my respect and admiration. But I do think that it has moved past any kind of romanticized idealism as you see the real toll that it takes and the real role the military plays in our national life.

Will we ever see post-9/11 Medal of Honor recipients featured in “Beyond Glory”?

I would never say never to anything. What I have felt certainly up until now and probably for some time is that there is a perspective that only time can bring to things. I think time is a really, really a vital thing. Remember, these are first-person stories that I’m telling in “Beyond Glory”, the most recent of which were in the Vietnam War, which was over 40 years ago. So, part of what I do is old men telling stories of their youth. One of the things that gets added to that is the patent of age — the details that are remembered, and also the details that are unremembered, or even perhaps remembered differently than how they happened in the first place. That’s all part of the equation. The vital thing is that lapse of time, the perspective that distance can give us. That isn’t to say that stories that happened in recent conflicts — Iraq, Afghanistan, Mogadishu — could not be treated and should not be treated dramatically. I just don’t know if I’ll do it in “Beyond Glory.”