After The Military, How Do We Regain A Sense Of Purpose? 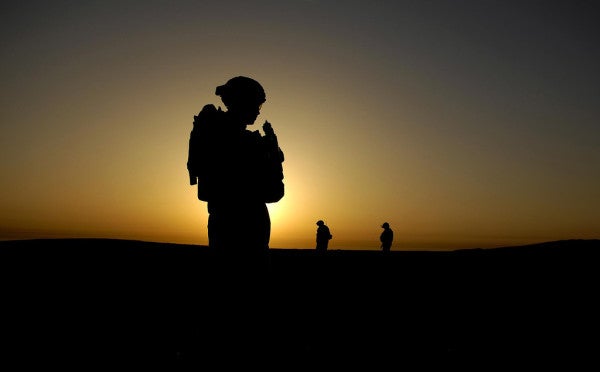 Ever since I left the Army, I have felt a sense of something I struggle to even find the words for. It was not a sense of loss, because loss is related to something tangible, something one can clearly say was here at one point and gone at another. It was like nostalgia, the feeling or desire for a place or time previously or things as they once were. But I am not naive enough to mistake this for true nostalgia, because I knew what I felt I longed for had not even really been there to begin with.

Can someone have nostalgia for a time that never was? The closest word for what I felt is probably sehnsucht, a German compound word that mixes together concepts of loss and addiction with the idea of the unattainable or unknowable. In a sense, it is that nostalgia for a place that never — or may never have — existed.

At first I called this missing place, this void where there had been an object I had previously never even been conscious existed, a lack of purpose. Purpose, I thought, I had in the Army — the price of failure was high, the joys of success great, the rewards intense, obvious, and immediate. I thought I was missing purpose, missing the feeling that what I was doing had real impact in the lives of soldiers and their families, in the lives and even continued existence of threatened foreign civilians, and even impact — in my highest of hopes and perhaps wildest dreams or nightmares — history. Purpose, I arrogantly asserted, did not exist in the same manner or to the same effect, in the civilian world. I set myself apart from others mentally and gave myself selfishly satisfying lines about being part of a fraction of 1%.

While such justifications are tempting, they are ultimately meaningless, empty, and dare I say it, false. How many of us who have left the service and subsequently built altars to our own egos and puffed out our chests about our service were actually motivated by such concepts when we were still in the Army? How many of us got up on a daily basis and were truly driven by the idea that we were the “blanket of security” under which the free world slept? How many do who are still in? Not many, if any at all.

Those things are things to be proud of, perhaps, but they are not enough to provide a raison d’etre. By telling myself that my life somehow had a purpose in the Army that others lacked outside it was the highest form of ego-centric silliness. Who am I to take the measure of another man’s life, the very stock of his existence, and declare that because he has not lived my life, he has lacked a reason to live, when I have not lived his life any more than he has lived mine? And yet I did do that, even if not out loud. I am not alone.

But what of those outside the military who have never served? Some struggle with a lack of purpose in their own lives, to be true, but most find it in their families, their personal challenges, or their friends. I decided that if my problem in civilian life was truly a lack of purpose, the fault was solely my own.

It was not purpose, I finally decided after more consideration, that I lacked.

This was as large realization, and one that required a bit of time to come to terms with, but that was not the end of it. Finally, I realized not only what I missed, but what it was that really provides the dynamo that drives life in the Army.

In reading an essay about a man’s struggle to do something he had previously regarded as impossible, I was suddenly struck by the fact that what I felt was present in the Army but missing in the civilian world was Nietzsche’s will to power. What I felt was missing was that life drive to create, to overcome, to challenge and defeat, to struggle.

Everyone, from the newborn baby to the person taking their last struggling breaths in the nursing home, has what German philosopher Arthur Schopenhauer would call the will to live; the will to exist, as Friedrich Nietzsche termed it in “Thus Spoke Zarathustra.” Everyone has the biological will to continue to live; even when the brain commits to the idea of dying, the body does not comply. Daily, the id refuses to be subservient to the superego.

Nietzsche, though, posits something else, in his concept of Wille zur Macht; he posits that particular will of man to create his own world and values, to define his existence on his own terms. He says that is the highest aim of mankind, and when someone finally realizes the enormity and magnitude of such will, that person will have ceased to be a regular person and instead become something else: the superman.

The epiphany I had was related to one of Nietzsche’s key points about the will to power: that in order to truly become the superman, man must subvert everything to the will. The will to power must be supreme because how else could it create and destroy? How else can something be remade unless the force that remakes it is greater than the strength of the object itself? The power to change the world — or one’s personal world — must be greater than the world itself. The will to power must be literally overwhelming.

It is in this truth that I finally found what motivated those of who enjoyed our service in the Army. We joined of our own free will; we were not conscripted; we were not forced. No, we chose the life, with its associated dangers and sacrifices and hardships, trials, and tests. The Army has a greater purpose than any single individual, it is true, but we joined freely.

Previously, I praised this sort of action as an altruistic bending of one’s own will to the greater good and needs, but now I’m not so sure. Did I become subservient to society’s greater purpose or — and this is nigh heresy — did I subsume the Army’s purpose into my own will? What if the fulfillment I felt in the Army came not from subjecting myself to something greater, but in subjecting something greater to myself?

Either way, it does not matter, really, because once the goal is chosen, once the will to power has spoken, it becomes what drives us. It is what makes us feel alive. Sacrifice, difficulty, pain, hardship? These are but the labor pains of the superman being born, merely the struggle of the self-butterfly emerging from the cocoon, just the occasional scrapes and bruises as the inner child learns to walk unaided.

We derive a perverse pleasure, a weird sense of schadenfreude about ourselves as we endure. We revel in our own pain, take joy in our own difficulty. Hardship is confirmation that the will — the ultimate life-driving dynamo — reigns supreme. Nietzsche’s oft repeated but rarely understood quote is particularly apt: “That which does not kill us makes us stronger.”

The fact that as soldiers we were prepared to give up our lives if necessary only brought more glory to the hungry god of the will. That “ultimate sacrifice” would not be sacrifice at all, that great will says, but transcendental bliss; the old man as kindling for the fires of change, out of which emerges, from a new mold, the superman. It is the will, our will, that drove us to such ends. What I felt was missing in my peaceful post-Army life was not purpose, it was the ability to sacrifice so much at the altar of my own will.

Fundamentally, this ability to sacrifice can be termed something else: freedom. Not freedom in the surface sense that it is often bandied about by politicians and advertisers; it is not the shallow freedom of small desires and material gain. Not the empty, petty selfishness of “doing what I want,” but the true, ultimate freedom Jean-Paul Sartre would call radical freedom. The idea that ultimately, mankind is free; that no one can truly force a man to truly do anything, because, even if the only alternative is death, man is still free to choose it.

What greater expression of freedom can there be than the ability to give one’s life? How much more free can a man be than to choose his goal — whether or not we say he subverts the Army to himself or himself to the Army does not matter — and then be given the ability to sacrifice his very self to achieve it? Is this not the supreme expression of radical freedom — the ability to destroy the oneself in the pursuit of the will to power — one’s true self?

This concept is not unique to the Army, by any means. Witness the marathon runner who pushes himself past exhaustion and fatigue to the “runner’s high” as he nears the finish. He does not begrudge the lost weekends, the early mornings, the shin splints and blisters, the worn-out knees, the torn tendons, the burning muscles. No! These are not hardships at all, these are joys. They are the sacrifices of the lesser to the greater, to the will to power, and they are made freely, not out of compunction. Take the example of the mountain climber who will give money and risk his life to climb Everest or Kilimanjaro or Denali. His will has spoken. Who is he to disobey, though it mean his life?

It is that will to power that drives them, but the choice is still theirs. The greater the sacrifice, the more devotion to that will, and the more true freedom, such a person has.

It is that freedom, I finally realized, that was missing. What I really missed was not purpose, it was not belonging, it was not pride. What I missed was the freedom to give everything in pursuit of something ultimately, and whether or not I consciously realized it at the time, that I wanted.

In the civilian world, such freedom is not often present, or at least not as obvious. In a sense, my discontent with civilian life comes from the fact that for so many years, the Army had made great sacrifice in the service of the will to power so easy; nowhere else was such radical freedom so accessible. There was the crux of my malaise. However, it is not that such freedom outside the Army does not exist, merely that it is more difficult to find.

My discontent was mere petulance. I had gotten lazy in my pursuit of freedom, easy as the Army made it.

My sehnsucht, my discontent, and my self-pity all disappeared, along with my inflated view of my “sacrifice.” Instead, I am buoyed by this thought: I still have my radical freedom, just like I did in the Army, and just like everyone else in the civilian world does.

What I do with it is up to me. Whether I choose to find another outlet for the expression of that great overpowering will is up to me, and there is no point looking anywhere else, or blaming anyone else, if I cannot find it.