The Air Force Is Facing A ‘Quiet Crisis’ Of Manpower, But Recruitment Isn’t The Problem

The Air Force's ranks grew during the 2016 fiscal year, but as of April this year the service was still … Continued 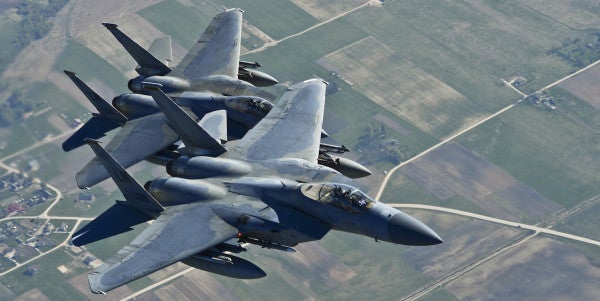 The Air Force's ranks grew during the 2016 fiscal year, but as of April this year the service was still more than 1,500 pilots short of the 20,300 it is mandated to have.

Of those missing, roughly 1,000 are fighter pilots. And the service stands to lose 1,600 more fliers over the next four years.

“We are in a crisis,” Air Force Chief of Staff Gen. David Goldfein said in late September. “If we don’t find a way to turn this around, our ability to defend the nation is compromised.”

The pilot shortage has been a problem for some time — Goldfein also called it a “quiet crisis” in summer 2016 — and stems from a number of sources, but it doesn't appear that getting pilots to sign up is one of them.

“In fact, the Air Force can see more pilots coming up in the pipeline than it has room to produce, so it's not a recruitment problem. It's actually a production and absorption and retention problem,” Lara Seligman, Pentagon editor for Aviation Week, said during a recent edition of Check 6, the Aviation Week podcast.

“Due to a combination of snowballing factors — budget cuts, longer deployments, drawdowns going back as far as the Cold War, and a recent spike in commercial-airline hiring — the Air Force can no longer train enough people to keep up with demand for the field and to keep pilots from leaving,” Seligman added.

Facing ongoing combat operations for much of the last 20 years, the Air Force has focused on keeping experienced pilots in combat roles, but one consequence of that has been a lack of pilots to act as training instructors.

This lack of instructors has created a bottleneck in the training pipeline, leaving introductory-level pilots with limited opportunities to advance, Seligman said. This affects the number of pilots available to fly advanced aircraft, and it also leads to frustration among airmen, who may leave for more lucrative work in the private sector.

While the Air Force has taken some steps to expand overall recruiting, requirement standards for pilots have not been loosened, but the service is looking to make training and other assignment practices more flexible. (A stop-loss policy has also been broached.)

One step toward getting more pilots through the pipeline “would be outsourcing some training to universities or commercial companies,” Seligman said, noting that such a measure might not work for fighter-pilot training but could work for mobility pilots or other non-fighter roles.

The Air Force is also reportedly considering outsourcing “red air” aircraft duties, bringing in privately owned planes to pose as rival aircraft during training exercises, freeing up Air Force aircraft for other uses. The service is also looking to form additional training squadrons, but that effort is for now limited by the lack of training pilots, Seligman said.

In 2016, the Air Force trained 1,100 pilots, including 235 fighter pilots. “This year they're ramping up, and the output's going to be closer to 1,200, but they want to ramp up to 1,600,” Seligman added. “That's the requirement to meet the demand signal. But right now they're just completely maxed out in terms of aircraft, in terms of runways — just in terms of resources.”

“We're maximizing the use of our air frames to the fullest extent that we can right now,” Air Force Lt. Gen. Darryl Roberson, head of Air Education and Training Command, said last month. “We can only produce so many flying training sorties per day, and that’s going to be exceeded” to hit that 1,600-pilot goal.

The light-attack aircraft that the Air Force is evaluating could help alleviate that resource problem and reduce the strain on some combat airframes, like the F-15s and A-10s leading the air war against ISIS.

The Air Force is also reviewing other administrative, deployment, and training requirements to not only free up qualified pilots and aircraft, but also improve quality of life for service members and improve retention.

The Voluntary Rated Return to Active Duty, or VRRAD, program, would let qualified retired pilots to return and fill “critical-rated staff positions,” allowing active-duty pilots to stay with units that need them for missions.

The Air Force has also gotten approval to raise bonus limits and plans to offer bonuses to more airmen in the coming fiscal year. It has increased pay for some officers and enlisted personnel for the first time since 1999.

“It's not about the money, the Air Force says. It's really about the experience,” Seligman said. “So I think they're focusing more on opening the pipeline and things like shorter deployments, as opposed to money, that will really make the pilots' lives better.”

The service has appointed the first general officer, Brig. Gen. Mike Koscheski, to lead its aircrew crisis task force, which was established earlier this year to address the pilot shortage

“This is a wicked problem,” Koscheski said in September. “The problem is not only ever changing. It fights back. You can’t just fix one aspect. They’re interrelated.”