Dogfighting at 9gs is like aiming ‘through a toilet paper roll’

If you have any hope of winning, your strength has to be greater than your opponent’s weakness. As a young second lieutenant in pilot training, I learned that lesson the hard way. 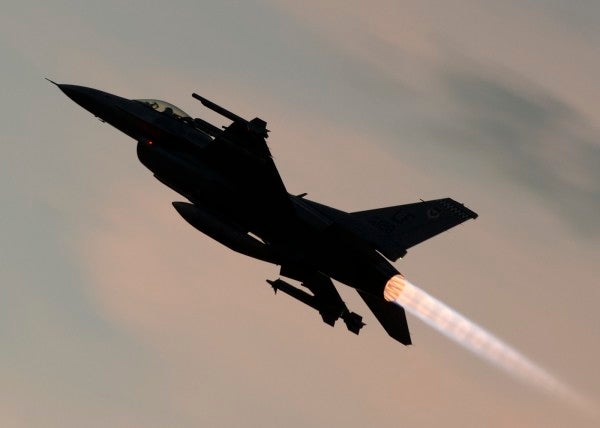 If you have any hope of winning, your strength has to be greater than your opponent’s weakness. As a young second lieutenant in pilot training, I learned that lesson the hard way.

I was flying a Basic Fighter Maneuver Flight, also known as dogfighting. The objective was for me to point at my instructor, who was in his own F-16, and as soon as we passed—with over 1,000 miles per hour of closure—maneuver my jet so I could gun him.

On the first set I hit the merge at just under the speed of sound and pulled back on the stick. At 50 pounds of force, the stick was fully-aft, yet only moved one inch—a design feature to make the jet as responsive as possible. The big stabilizers on the tail dug in and in less than a second I was at 9G’s.

At 9 times the force of gravity, my body weighed over 2,000 pounds. The crushing force pushed me into my seat as blood drained from my head into my arms and legs. If enough drained out, I would lose consciousness and, more likely than not, impact the ground before I woke up. To counteract this, I performed an anti-G straining maneuver—squeezing my legs and abs, while making short, crisp breaths to keep pressure in my lungs. Even with an effective G-strain, I lost my peripheral vision as the world closed in until it looked like I was watching it through a toilet-paper roll.

For the next minute or so I struggled to maneuver my jet into a position to gun my instructor. He was able to easily neutralize my game-plan and called “knock it off” so that we could set up the fight again. The next three fights ended the same way. By this point, I was out of breath and exhausted from fighting him and the G’s. We ended up doing two more sets, but instead of just neutralizing the fight, he gunned me on both of them.

In the debrief, after the flight, my labored breathing was evident in the tape. He paused it and said, “How did you ever expect to win today? I have 15 years of experience flying fighters, and granted, you don’t have anywhere near that, but I’m also in better shape than you.”

He was right. Being in my mid-20’s, I should have been in better shape than someone in their early 40’s. Having far more experience than me, there was no way I was going to be tactically superior. But, my fitness, and my poor performance towards the end of the flight was completely in my control. His weakness was greater than my strength which meant there was a zero percent chance of me winning that day.

I’ve reflected that lesson many times since; not only for myself, but also as a package commander in charge of upwards of a hundred aircraft. As the weaker force, you must find an area on the battlefield where your strength is greater than the enemy’s weakness. If you can’t find it, you’re in for a bad day. Likewise, if you are the incumbent, stronger force, it’s important to shore up your weaknesses so that hopefully they are greater than your enemies strength.