A dozen years after he was nearly killed by a roadside bomb in Afghanistan, Master Sgt. Israel Del Toro was... 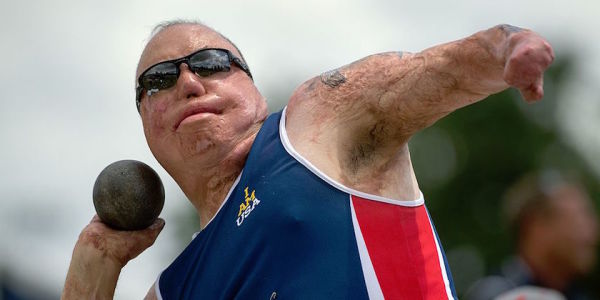 A dozen years after he was nearly killed by a roadside bomb in Afghanistan, Master Sgt. Israel Del Toro was on the verge Saturday of completing a final, unbelievable stage of his comeback.

After miraculously surviving third-degree burns over 80% of his body, Del Toro has returned to his feet, his family and his job in uniform. Now, the first airman to return to duty after being deemed 100% disabled was looking to return to Earth — by parachute.

“It's one of my personal goals,” said Del Toro, universally known as “DT.”

After enlisting in the Air Force in 1997, he signed up for one of the service's hardest jobs — calling in airstrikes from the ground.

He trained to jump into combat with airborne Army units, leaping from the sky 130 times in the eight years before his injury.

There's something different about airmen who spend so much time with the Army and special forces teams, Del Toro said.

Before getting a chance to leap from a plane, Del Toro had to go through parachute training a second time, relearning alongside cadets at the Air Force Academy, one of two Defense Department jump schools.

The parachute program at the academy has long been held up as among the things that makes the school special. For most of the 18-22 year-olds in the class, parachuting is the scariest thing they've ever done.

It's a class taught by cadets, who show their comrades the ropes. Along the way, the students also learn how to overcome their fear – a useful skill for future military officers.

“Some of these guys will face real challenges in their careers,” explained Tech. Sgt. Josh Pickering, as he helped oversee the cadet instructors.

Long before the bombing, Del Toro knew a lot about real challenges and overcoming fear.

During the 2003 invasion of Iraq he and a team of two dozen troops were flown to an airfield behind enemy lines.

With enemy troops trying repeatedly to reclaim the place, and just two .50 caliber machine guns on Humvees, the team held their ground with no sleep and repeated airstrikes, called down by Del Toro.

Parts of academy parachute training are designed to shake students up.

One part has students hanging from a harness as instructors shout contradictory orders. Students have to properly run through parachuting procedures during the chaos.

It's enough to drive some to tears.

But Del Toro kept a smile on his burn-scarred face.

“If I can be blown up, be on fire, jump in a creek, and still call in an airstrike, I can do this,” He explained.

On Dec. 4, 2005, Del Toro was in Afghanistan when a roadside bomb went off under his Humvee as it crossed a creek.

The blast tore into his flesh, severed his fingers and removed his nose.

He remembers hitting the creek to put out the flames and using a radio to call down close air support for his embattled unit.

“My medic kept me awake until I got on the helicopter,” he remembers.

He has flickering memories of a hospital in Afghanistan before losing consciousness.

During those months of darkness at the Texas hospital, his bride Carmen was at his side. They were a young couple then with a toddler in tow — Little DT who is now 14.

The doctors told her that Big DT would probably fade from the coma into death.

The doctors hadn't known the DT she fell in love with.

“He thinks he's Superman,” she said.

On Saturday, The master sergeant wore a tan replica of an American flag on the shoulder of his green flight suit.

“This is the flag I got hurt with,” he said.

Two months after he came out of the coma, Del Toro walked out of the hospital. Doctors had told him he would never walk again and would need a respirator to breathe.

But he kept fighting.

“You adapt and you overcome,” Del Toro said.

A Battle To Stay

The biggest fight for Del Toro may have been his quest to stay in the Air Force.

Even with his remarkable recovery, Del Toro was still significantly limited by his injuries.

Burn patients have to struggle to regain use of their muscles and limbs.

Del Toro fought through two years of physical therapy and still was considered “100%” disabled — a status that leads to a pension rather than a promotion.

He didn't accept his discharge without a fight.

And Del Toro picked up some powerful allies along the way, including President George W. Bush, who had visited his room at the Texas hospital.

In 2010, Del Toro became the first airman with a 100% disability rating to be allowed to re-enlist. This year, he'll become the first fully-disabled airman allowed to stay in uniform past 20 years of service.

The Air Force isn't keeping Del Toro around due to some sense of charity or pity.

Lt. Col. Sean Baerman, who commands the 98th Flying Training Squadron which includes the jump school, said cadets need people like Del Toro to teach them what's expected of those who serve.

“It's fantastic to have him here,” Baerman said.

Once Del Toro finishes jump school he'll be working for Baerman at the squadron and working with the school's 4,000 cadets.

“I hope I can inspire and motivate them,” Del Toro said. “Even give them a couple of words of wisdom.”

In the parachute training program, Del Toro has already been dishing out wisdom. The training is grueling, designed to push the strongest of the cadets to their limits.

When his youthful classmates falter along the way, Del Toro gives them a little push.

“Don't let a guy with no hands beat you in this course,” he says.

Del Toro has kept himself going with a strict set of priorities and plans.

“When I got back to active duty, I had three goals,” he said.

He's checked off two – flying an airplane and regaining his ability to control airstrikes for troops.

He also picked up a few – mentoring airmen, setting an example for wounded comrades and winning medals at the Invictus Games for wounded troops.

The last of the original big three was to complete his 131st parachute jump. But the Air Force was reluctant to risk the life of a man who already had been so close to death.

“I was at the point where it was never going to happen,” he said.

But Baerman saw possibilities, not disabilities when he thought about Del Toro returning to the skies.

On Saturday, a dozen cadets lined up for their first jumps at the Air Force Academy. Del Toro was at the end of the line for No. 131.

Carmen and Little DT watched as he prepared to board a plane for a 4,500-foot climb above the school's airfield.

“It's emotional,” Carmen said. “It's my first time seeing him jump.”

Little DT, now not-so-little, said he wants to parachute on his 18th birthday in a few years. But he admits that will be a smaller leap than the one his father is taking.

“Not many people can do what he has done,” he said.

With a red parachute “like Deadpool” packed away on his back, Del Toro stood in the door of the circling plane.

Despite everything he's done and every obstacle he's toppled, the master sergeant still knows fear.

But Del Toro had come too far to let the butterflies win. One step and he was in the sky.

A few minutes under the silk canopy and he was back on the ground.

A smile was fixed on that scarred face.