The first thing a viewer notices about the documentary “That Which I Love Destroys Me” is the constant motion. Starting... 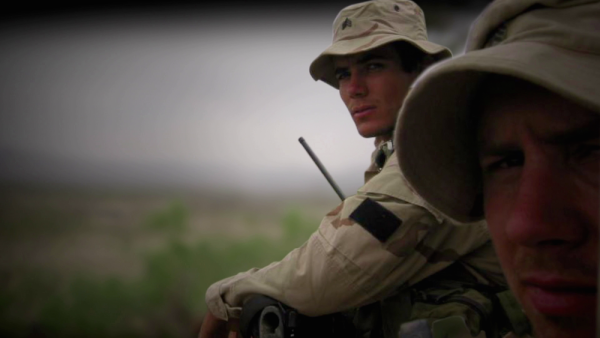 The first thing a viewer notices about the documentary “That Which I Love Destroys Me” is the constant motion. Starting with the opening shot of the landscape moving by an airplane window, motion characterizes the two main subjects who often fidget back and forth in front of the camera; it seems the only time they remain still is traveling on public transportation. Then, the swaying of the bus in the background of the frame continues the constant motion, reminding the audience that here are two men of action, temporarily sidelined by the sort of horrific injury most viewers can only imagine.

The film, which is written and directed by Ric Roman Waugh, focuses on the story of two friends; both of whom are veterans of special operations forces.

“We were the terrorists’ terrorists,” says Tyler Grey, a former U.S. Army Tier 1 operator and one of the two subjects of the documentary.

We first meet Grey through video footage that he shot himself to document the healing process after a combat injury to his arm. This footage, as well as footage shot in Afghanistan and provided to the filmmakers, reminds the audience that these days, many service members are the primary witnesses to their own experiences.

From 2010 to 2013, the filmmakers followed Grey and his friend Jayson Floyd, a Ranger who served with the 75th Ranger Regiment. The film introduces the two friends together at a civilian firing range. After a few shots of the two firing at their targets, they sit down for an interview, where Grey admits that the reason he has a black eye is a long story. “Jayson punched me in the face,” he says.

Ten minutes into the film, this is where the documentary begins to gain momentum. As each man explains and explores his journey through being injured and the road of recovery, the friendship between them cements the storyline. The motion of the film starts to add to the understanding of the film rather than being a distraction.

“That Which I Love Destroys Me” is part of the Return the Service campaign, which, like many other initiatives that have grown out of two long wars, focuses on exposing the issues that many service members face upon reintegration. As Floyd remarks in the film: “All the mental problems that are going on right now — it’s going to affect a generation.”

This documentary-campaign formula is by now a familiar form of digital media activism. What sets this particular film apart is the friendship between the two men, and how that friendship affects their recovery.

Along the way, the audience meets Grey’s ex-girlfriend and Jayson’s brother, who both provide a perspective into the veterans’ lives. These two characters also provide faces with whom civilian viewers can identify. Danyel Paulsen, Tyler’s ex, candidly admits that faced with his injuries, she did not know how to be supportive, that she knew she wasn’t the one who could help him in his situation.

Floyd’s older brother, Randy, a licensed clinical social worker, relates that he had slightly more success in communicating. Still, he knew that Floyd needed help above what he could provide and encouraged him to seek it. The former special operator tried several therapists until he found one with whom he finally “clicked.”

These relationships demonstrate two lessons to be learned from dysfunctional reintegration — first, that many civilian family members are unprepared to deal with their loved ones’ physical and mental injuries after combat; and second, that such injuries require professional help. This film helps illustrate these two lessons both for civilian audiences, as well as military viewers.

The third lesson that can be gleaned from this documentary, and one that is not always immediately apparent is one that rings true for many of the people in uniform: Once a soldier, always a soldier.

Toward the end, the film focuses on Grey’s participation on a team that he put together for the American Heroes Challenge in Las Vegas, an obstacle course and training challenge in which teams of special operations military personnel compete against law enforcement SWAT teams. As he maneuvers through the course, Grey is the picture of focus and determination, looking for once as if all the motion of the film has finally found its purpose.

Yet at one of the obstacles, a rope climb, Grey is unable to make it to the top. He admits to the camera that he was attempting to climb it like his old self would have done so. He asks to try again the next day — not for points, but rather to prove to himself that he can do it. The entire team shows up to repeat the obstacle course with him, and this time, when he approaches the rope climb, he adapts a posture that takes his injured arm into account and makes it all the way to the top.

This is not a pretty film. It takes an unflinching look at the problem of post-traumatic stress disorder and the havoc it leaves in veterans’ lives, especially when coupled with physical injury. In doing so, it portrays both the emotional wounds, as well as the actual wounds of war, in raw detail.

“That Which I Love Destroys Me” shows the traumatic effects that military service can inflict on those within its ranks. In the conversation about the effects of the long wars on this generation of service members, films like this one are of vital importance.

Visit Take Part’s website to learn more about the Return The Service campaign, and the ten-city screening tour of “That Which I Love Destroys Me.”