Are Rideshare Platforms Like Uber The Answer To Limiting DUIs In The Military?

“SFETY is our number one concern,” read a slide in a recent safety standdown briefing in the Norfolk area. Although... 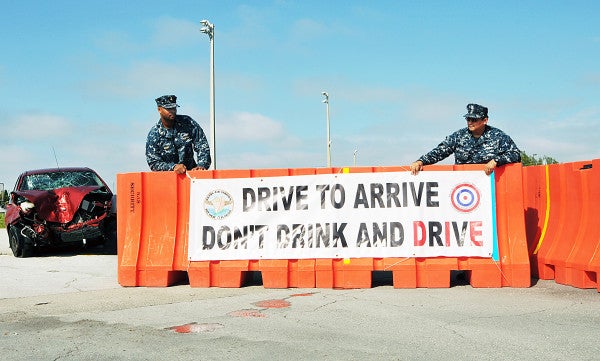 “SFETY is our number one concern,” read a slide in a recent safety standdown briefing in the Norfolk area. Although the “A” was nowhere to be found, there were plenty of warnings against speeding, motorcycle safety, and of course driving under the influence. Judging from its effectiveness at incorporating spell check, it is unlikely that this presentation, and others like it, had much of an effect in preventing any of the aforementioned behaviors. It’s a shame, too, because entirely preventable incidents like DUIs can have a severe impact on armed forces personnel and the military at large. Surely there must be a more effective way to discourage service members from drinking and driving.

In this arena, as many others, technology may have an answer. Rideshare services such as Uber, Lyft, and Sidecar provide the opportunity to coordinate a nationwide program to incentivize positive decisionmaking while off duty. The idea would be to push service members to use these services rather than drive themselves when they plan to consume alcohol. The program would permit individual service members to sign up for a promo code that allows for subsidized rides on one of those platforms. The code would only be good for a small amount (let’s say $5) and would expire every Sunday. A new credit would be added to the account every Friday. Service members would be able to pool their credits; if multiple people got into a car, they would each get to put $5 toward the total cost.

Such a program may be worth the cost due to the outsized impact that DUIs can have on the force. Not only do they put people’s lives at risk and end careers, but their associated administrative requirements distract commands from their primary warfighting missions. These incidents, especially when they become fatal, can do immense harm to the military’s relationship to local communities. You can argue whether or not military leadership is overly involved in the personal lives of service members, but what is incontrovertible is that the Department of Defense long ago decided that reducing the number of DUIs servicewide was a priority.

To achieve this goal, Pentagon leadership offered mind-numbing general military training and zero tolerance policies. Many commanding officers proclaim to recently checked-in personnel, “If you need a ride, give me a call.” It is hard to imagine who would actually call their commander needing to be picked up from a bar — though if you have an example of this, please share in the comments section!

Some commanders would offer their duty vans as rides of last resort; such initiatives are well intentioned, but technically misuse of a government vehicle. In a forerunner to this article’s proposed rideshare program, most commands adopted what is known as the “Tipsy Taxi,” whereby noncommissioned officers and officers would pool together money to pay for cabs for personnel who were stuck late at night without a way to get home. These are essentially lines of credit with local cab companies available for troops to use anonymously. The “Tipsy Taxi” had the right idea: take a priority for commanders and achieve it through an active partnership with their personnel; but with modern technology, we can do better.

If military leadership really cares about our sailors getting from point A to B without endangering themselves or anyone else, they owe it to the troops to do better than stern sticks and ad hoc carrots. The “Tipsy Taxi” is certainly a great start. However, it has two shortfalls that prevent it from being an effective tool across the military. First, it depends on local cab companies and their relationships with individual commands, and would prove difficult to scale to a servicewide level. Second, it was a tool for service members to use after they were already in a bind, rather than a preemptive way to influence their behavior.

Rideshare companies service cities large and small including Tampa, home of MacDill Air Force Base and Fayetteville, just outside of Fort Bragg. Uber for example, is available in over 100 cities and 57 countries. Even if a service member resides in an area where ridesharing is not available, unlike “Tipsy Taxi,” he or she can use it when travelling to a serviced area. This proposed program would follow the user on temporary additional duty orders and even on leave.

Subsidizing rideshare programs sounds expensive, however the Department of Defense could pay for this program by allocating funds from other initiatives with similar objectives. Some likely candidates could be other DUI prevention programs; substance abuse counseling (since most referrals are triggered by DUIs); and Morale, Welfare, and Recreation. One of the driving forces behind this proposal is an effort to more effectively use resources already being spent toward achieve the goal of DUI prevention. Unfortunately, the military is hurting for funding in too many other places to justify spending additional funds on a program such as this.

Additionally, this program may not cost as much as it initially seems. When you take away those service members who are deployed, away on training, and who do not have any interest in using rideshare services on the weekends, you are left with a much smaller subset of the force. It could be limited in scope, targeted only towards the areas with high drunk driving rates or only be active in the summer months given their reputation for off duty incidents. Also, with such a large influx of money into whichever ride share company is chosen, the military should have a strong hand in negotiating how much of the credit it actually pays. Ideally, you would only have a fraction of the cost paid by the Department of Defense.

Still skeptical? Let's try a small pilot program in an area of concentrated service members such as Hampton Roads, Virginia or San Diego, California. It could consist of a two-to-three month period where usage and overall DUI rates amongst service members were monitored. If there is a statistically significant drop in DUI arrests from the same period the previous year, then voila! The program probably works. If no such drop exists, then it was a failed effort in a noble cause. The worst that happens is a much needed boost in morale.

The bottom line is if military leaders say they prioritize the reduction of DUIs so highly, they ought to do the most they can to accomplish their goal. Instead of being purely reactionary, leadership can help prevent these incidents from occurring in the first place. We owe our service members more than empty powerpoints, non-judicial punishment, and a swift kick out the door — even if they did play the primary role in their own fate. The downside is time, effort, and money. The perspective upside is the chance to save a few careers, and lives. That certainly sounds like a worthwhile effort.