When Iraq War veteran Omar Gonzalez jumped the fence of the White House on Sunday, Sept. 19, and rushed the … Continued 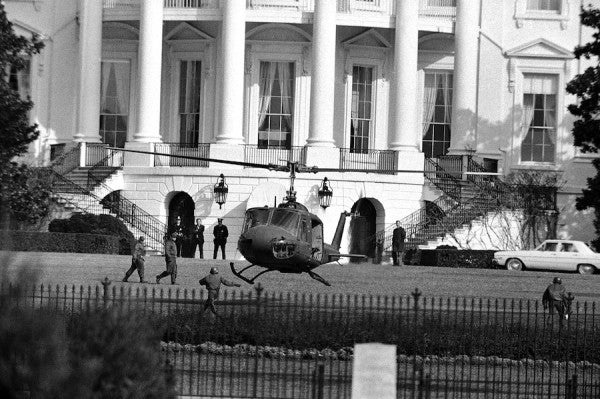 When Iraq War veteran Omar Gonzalez jumped the fence of the White House on Sunday, Sept. 19, and rushed the building, the Secret Service reported that he was stopped at the door. But on Monday, the Washington Post revealed that he actually made it well into the East Wing before being overpowered by Secret Service agents.

As brazen as the incident was, raising concerns about White House security, it pales before the spectacle of an Army private landing a stolen helicopter on the White House lawn amid a hail of gunfire over 40 years ago.

A little past midnight on Feb. 17, 1974, Pfc. Robert K. Preston stole an unarmed UH-1 Iroquois, better known as the “Huey,” from Tipton airfield in Fort Meade, Maryland. Twenty-year-old Preston, who had a private fixed-wing pilot’s license, had washed out of the Army’s helicopter pilot school the previous year.

After buzzing drivers on the Baltimore-Washington Parkway, he reached the White House and briefly touched down, with the Secret Service initially not firing on him. After he took off from the lawn, the arrival of two Maryland State police choppers led to an aerial chase.

He was “one hell of a pilot,” a Maryland state police later said.

Related: 5 times service members made the news for doing something hilariously stupid.

At his court martial, Preston admitted stealing the chopper, saying that the Army had unjustly extended his term of enlistment after he had failed flight school.

Despite an escapade that would have any sergeant major suffering a rage-induced stroke, Preston got off relatively light. After serving six months in a military stockade, he was released with a general discharge for unsuitability.

The event is believed to have inspired failed presidential assassin Samuel Byck, who tried to hijack a commercial airliner less than a week later in order to crash it into the White House and kill Nixon.