The Army has reshaped its primary operating concept to focus on large-scale combat against enemies with technology and capabilities similar... 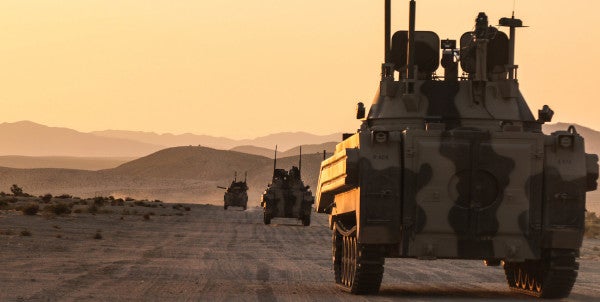 The Army has reshaped its primary operating concept to focus on large-scale combat against enemies with technology and capabilities similar to American forces after 16 years of fighting insurgent groups in the Middle East and southwest Asia.

The Army on Tuesday rolled out its updated field manual during the Association of the U.S. Army’s annual meeting in Washington. Titled FM 3-0 Operations, the field manual emphasizes the service’s need to adapt to potential battlefields where enemies have modern tanks, artillery, air forces, drones and cyber capabilities.

Gen. Mark Milley, the Army’s chief of staff, said Tuesday that adversaries including Russia, China, Iran and North Korea have spent nearly two decades studying the U.S. military’s strengths and vulnerabilities as it has fought terrorist groups. Those nations have invested in modernizing their forces and preparing them to exploit vulnerabilities developed while the United States focused on fighting insurgents.

“Our advantage has steadily eroded,” he said.

It marks the first major overhaul since 2011 of the field manual, which defines the Army’s fighting priorities for soldiers, said Army Lt. Gen. Michael D. Lundy, the commander of the Combined Arms Center at Fort Leavenworth in Kansas.

The shift in focus was necessitated primarily by adversaries such as Russia, which has used advanced military techniques against Ukrainian forces since intervening in the civil war there in 2014.

“The environment has changed, and it has changed dramatically,” Lundy said. “Threats today are much more sophisticated and capable.”

The need for the United States to fight such a near-peer adversary is now more likely than at any time since the Cold War, he said.

And such a war would be “significantly more dangerous” than the combat American soldiers have faced in Afghanistan and Iraq through the last 16 years, said Lundy, who helped write the new manual during the last seven months.

The new fighting manual places increased emphasis on large-scale combat that would include multiple Army divisions of some 20,000 soldiers, which means refocusing the Army to deploy full divisions and even corps as opposed to the brigade combat teams that it has deployed independently during recent wars, Lundy said.

It also means ensuring the divisions have built-in cyber warfare and aerial defense capabilities, which have not been required on the battlefields in Iraq and Afghanistan.

On Tuesday, Lundy highlighted Russia’s use of drones to scout the locations of Ukrainian forces before releasing massive long-range artillery barrages, such as an attack in July 2014 near the beginning of the conflict when an entire Ukrainian army battalion was virtually destroyed.

Many near-peer adversaries, including Russia, use long-range artillery as their primary offensive weapon, Lundy said. To counter such a threat, the United States must be able to shoot down or jam the drone systems from the battlefield. It also must be able to protect its force from incoming artillery or fire from aircraft, he said.

“We haven’t been shot at by anything in the air until about six months ago when started doing it with unmanned systems,” the general said. “The threat had gone away, so we weren’t investing in that. We’ve got to change that now.”

To change the Army’s emphasis to focusing on large-scale operations it means units will adjust their training at home and at regional combat training centers. While the Army has spent the last three years adjusting its training center rotations to prepare units to fight insurgents and near-peer enemies, Lundy said future rotations will place increased emphasis on fighting modern armies capable of launching debilitating cyber and air attacks on the unit.

Preparing the Army to fight a near-peer adversary is ultimately a deterrent to other countries who do not want to engage an Army that they cannot destroy, Lundy said.

“This is about thinking differently about warfighting than we have for the last 16 years and filling in our capability gaps,” he said.” “It’s about preparing to fight a near-peer fight today and deterring our adversaries from wanting that fight.”