A little over 20 years ago, my grandfather gave me a small box of his Army Air Corps accoutrements from... 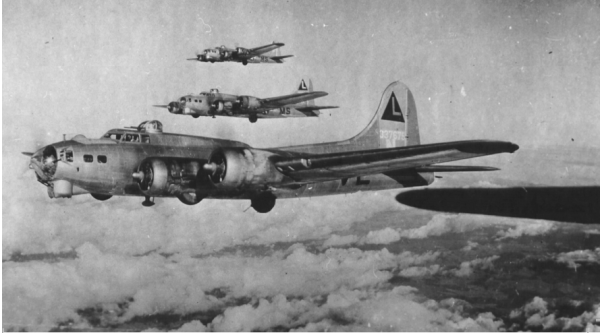 A little over 20 years ago, my grandfather gave me a small box of his Army Air Corps accoutrements from his time as a World War II bombardier aboard a B-24. I was mystified by it at the time. In fact, I even placed some of his items in a small shadow box and I still display them in my office today.

In 1995, I was commissioned into the Air Force wearing the same gold second lieutenant bars on my shoulders that he wore on his 50 years before. Even so, I didn’t know his story very well. Later that year, he died before I could get it and I’ve been filled with regret ever since. In 2000, I managed to capture the story of his older brother, who served in the 42nd Infantry Division (the “Rainbow” Division) under George Patton’s 3rd Army in the European Theater in 1944 and 1945. For the sake of my roots and those of my kids, I was beyond thrilled to get it before he also passed away a few years later.

Similarly, authors Lee Trimble, and Jeremy Dronfield were compelled to capture Trimble’s father’s story in his book, “Beyond The Call: The True Story of One World War II Pilot's Covert Mission to Rescue POWs on the Eastern Front,” which was released in the United States by Berkley Books earlier this year. Capt. Robert Trimble served as a bomber pilot in the European theater in 1944 — something Lee and his siblings always knew, but never took the time to fully capture. In 2006, Robert was injured in a bad fall; it was at that point that Lee realized his dad wouldn’t be around forever and began to ask about his war experiences. The answers surprised him.

Captain Robert M. Trimble on the road between the American camp and HQ site at Poltava.

Robert Trimble was indeed a bomber pilot who beat the odds and survived a long string of combat missions over Nazi Germany. But the story went far beyond that. Lee discovered that his dad was a real hero. Not just a “hero” in the broad sense of the word — the sense that American society sometimes places on its veterans because they’ve simply worn the uniform. Robert’s heroism transcended military service; he risked death and international incidents to save hundreds, if not thousands, of people from almost certain death as the war came to a close. His story is also illustrative of why the Cold War became what it was following the conclusion of World War II, and still reverberates over 70 years later in issues that remain relevant in the United States today.

It isn’t often you come across a story that hits you in the head with a two by four. But this one does just that through this riveting story about one veteran’s heroic cloak-and-dagger activities behind Russian lines during the twilight of the Second World War.

The account of Robert Trimble starts with many of the same hallmarks as those of my grandfather and his brother. But it’s also filled with something different: suspense, intrigue, deep secrecy, and mortal danger in a place where World War II history goes largely undiscussed in our country, Soviet-occupied Eastern Europe. This story spoke to me as few others have.

In late 1944, Trimble had just completed his 35 bomber missions aboard a B-17, and became a member of the coveted “lucky bastard” club. With casualty rates for the Army Air Forces higher than those of ground troops, it was a major relief that he was able to stay alive. He knew he’d be going home soon, even if it would only be a short time before he redeployed to fly again, whether back in Europe or in the Pacific against the Japanese. Nearly overcome with angst to get home to see his wife and baby daughter (whom he hadn’t yet met), his commanding officer unexpectedly called him into his office at Debach Airfield in southern England and made him an offer. Trimble could go home to see his family and come back in three weeks for more combat, or go to Eastern Europe to be part of several “salvage teams” that would go into Allied-held (Soviet-held) territory to recover downed bombers and any surviving aircrews. It would be “safe.” No combat, no bombing missions, and it might even help him avoid flying through the end of the war. It only required that Trimble depart as soon as possible. And he couldn’t go home first. He struggled with the decision, but ultimately chose to travel east.

It wouldn’t be long before he realized running aircraft salvage operations was a cover story. Trimble’s journey took a circuitous route through covert safe houses via nameless secret agents in places like London and Tehran. Suspicious, he went along with it thinking it all might be a big mistake, but when he arrived at Poltava Airfield in western Ukraine, Trimble quickly found himself embroiled in highly classified operations.

At Poltava, he got the full story. The Russians had not honored their commitments from the recent Yalta summit between Joseph Stalin, Winston Churchill, and Franklin Roosevelt. Allied leaders had agreed that stranded aircrews and escaped or released allied prisoners of war from camps liberated by the advancing Red Army would be sent through Poland to Odessa to be repatriated. While Soviet forces half heartedly “helped” American and British aircrews get out of Eastern Europe, escaped American POWs were systematically ignored, starved, and sometimes even murdered. Covertly, Trimble was charged with rescuing these desperate individuals under the guise of aircraft salvage missions. Feeling misled by his own government, he was initially an angry and reluctant participant until his secret missions brought him face to face with Nazi and Soviet war crimes. With his resolve stiffened, the work took on a deep meaning for Trimble, and he made dramatic headway against incredibly difficult odds.

“Beyond the Call” is a true and vivid portrayal of war illustrating that what veterans endure after coming home isn’t much different today than it was in World War II. On a finer scale, it sheds light on a little-known chapter of the world’s greatest calamity in modern times, and begins to apply vibrant color to the roots of the Cold War and the problems returning veterans face. Robert Trimble’s story, however, isn’t just a story about war and geopolitics. It’s personal, and it reminds us freedom has come at a monumentally high cost that our grandparents’ generation paid for in blood. Our World War II vets are dying at an average rate of 600 per day, and it is incredibly important to capture their stories before they’re gone. In a society often fraught with oblivious self interest, it’s these accounts that help us remember the sacrifices made by previous generations to preserve our freedom.