Building Connections Through Conversation: A Review Of New Film On The Civilian-Military Divide

If anyone in the military has had to sit through a speech in the last 10 years, he or she... 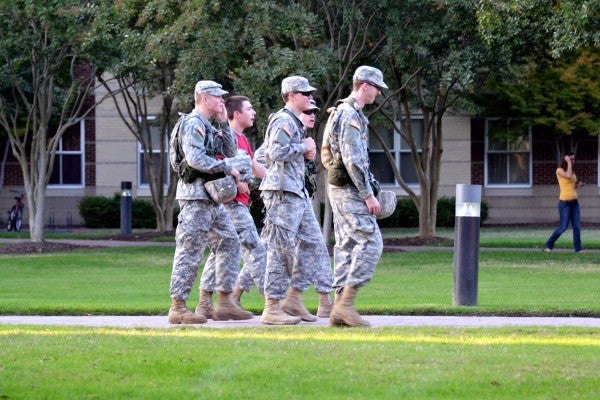 If anyone in the military has had to sit through a speech in the last 10 years, he or she has most likely heard the quote that we who serve are less than 1% of the American public, and that makes us special.

It also contributes to the civilian-military divide, a topic addressed in the film “The Civilian-Military Divide: Bridging the Gap,” the headline event at the GI Film Festival Congressional Reception May 21 on Capitol Hill.

The film, directed by Canadian filmmaker Rob Roy, addresses the issue of the civilian-military divide, the reasons behind it, and the dangers of allowing the divide to continue to grow in a society that must use the military in an informed and strategic way while maintaining civilian authority over it.

“[The film] is a conversation starter,” said Brandon Millett, co-founder of the GI Film Festival, which hosted the U.S. premiere of the hour-long documentary. This is where the value primarily lies — in the conversation that it begins and hopefully will continue.

The themes presented in this film are not new, nor are they particularly unique in perspective. The majority of interviewees have themselves contributed to the conversation regarding the civilian-military divide, whether through political activism and/or through publication of non-fiction works.

Amid the book advertisements and the obligatory Clausewitz quotes, the main thesis of the film offers the idea that one of the factors driving the civilian-military divide is the disappearance of Reserve Officer Training Corps programs from elite college campuses. This theory suggests that since many of the country's future leaders and opinion-makers are deprived of contact with the military, they are ill-equipped later in life to make decisions regarding that military.

Some of the supporting evidence for this theory points to the growth of the civilian-military divide since the Vietnam War, which correlates to the removal of ROTC programs from Ivy League college campuses in 1968. Other speakers in the film lamented the paucity of men and women serving in government who have either served in the military or who have family members serving.

Again, these themes are not new. In 2011, as colleges debated inviting ROTC back to their campuses after the repeal of “Don't Ask, Don't Tell,” several commentators and writers addressed the issue in everything from college newspaper editorials to white papers to online opinion blogs

The themes may be familiar, but the conversation is still important, not only for the issues addressed in the film, but what is also not there.

One important voice missing in this “conversation” is that of the active duty service member. The film, through its focus on ROTC's presence on college campuses, necessarily privileges those voices involved in ROTC. There are few uniformed men (and no uniformed women, aside from cadets in training) who are not involved in an instructional role.

This omission means that the charges of “moral arrogance” and “moral superiority” go unanswered for the most part. These charges, leveled most strongly by Naval Academy instructor Bruce Fleming, hold a grain of truth. Members of the military are self-selecting — part of what it means to have a “volunteer military” — and are part of a very small minority who are privileged to serve.

There is no doubt that in their words, their behavior, and their choice of memes on social behavior, one may see evidence that service members see themselves as special. But a film such as this does the military a disservice by failing to address this part of the conversation within its framework.

There is another point of view missing from this documentary. The omission is not immediately apparent, especially to the military viewer — I failed to notice it until the Q-and-A session following the viewing. Roy explained, PBS advised him that in order to distribute the film, it couldn't be a “propaganda piece.”

As such, the filmmakers attempted to find dissenting viewpoints that opposed the return of ROTC to college campuses. They were unsuccessful in finding anyone willing to appear on film, as previous attempts to speak up had resulted in personal and professional retaliation. While the value of such dissenting opinions may not be readily apparent, to truly be a “conversation,” these opinions should at least be welcome.

More information about the film, including future air dates, can be found at the film's website.