A scene from Call of Duty Advanced Warfare was the target of plenty of mockery from the gaming community when it was released.... 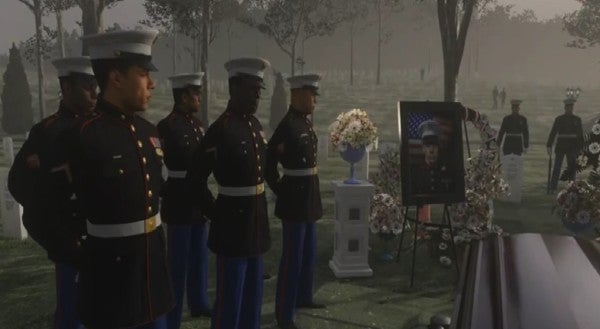 A scene from Call of Duty Advanced Warfare was the target of plenty of mockery from the gaming community when it was released. The scene in question involves the player attending the Arlington funeral of his fellow Marine and close friend who was killed in a previous operation.

Many have criticized the game’s controller prompt to pay your respects in front of your comrade’s casket, perhaps because of the Call of Duty franchise’s tendency to incorporate quick button presses into every situation; but these critics are missing a greater point.

More compelling is that the Call of Duty series is finally addressing the emotional costs of combat. In the narration before the funeral begins, the main character remarks how he wishes he could trade places with his fallen comrade, and that among the casualty statistics is an individual story of grief and loss. The character’s own wounds are examined as well. As you, the player, look down at the casket and your dress blues, you notice your own amputated arm in a sling.

Also included in the sequence is footage of fallen Marines being prepared for burial at Dover Port Mortuary at Dover Air Force Base in Delaware, another aspect of military life not covered by video games; even in military films and television shows it’s relatively uncommon. Call of Duty is trying to portray the characters who fight alongside you as more than M4s with legs, as more than disposable. The critics who say that the funeral scene is disrespectful to veterans have it backwards; the scene recognizes the cost of war on an emotional and physical level in a way the series hasn’t before.