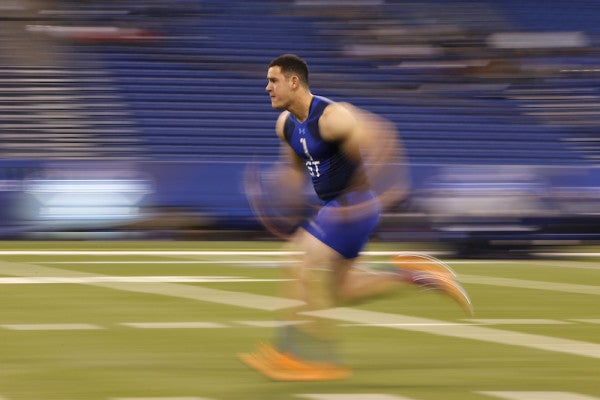 During last week’s NFL draft, the New England Patriots selected Navy’s Joe Cardona with their fifth-round pick. This great opportunity for Cardona is a reminder the Department of Defense must revisit its current policy regarding service academy athletes and their opportunities to play professional sports.

While the policy provides reasonable controls — such as the prerequisite to have secured an actual contract to a professional sports team before applying, and the requirement for an immediate return to service once the officer is no longer under a binding agreement — it is misguided in two important areas: the option for early release and the requirement to serve immediately for two years upon commission.

Current DoD policy allows for early-release consideration from the military, if the member “serves a minimum of 24 months of their active duty service obligation.” To be blunt, this seems ludicrous. Why would a policy that is supposed to “enhance national recruiting or public affairs efforts” through professional sports hinder the chances of a prospective professional athlete by taking away his or her prime playing age with an immediate two-year service requirement? Why must the obligated service be immediate? Most importantly, why is there an option to serve less than one’s full-service obligation?

A more appropriate solution would be to incorporate a DoD-wide policy that allows for a delayed-entry option, but with a requirement to serve out the full active-duty service obligation once the individual’s professional sports career is complete.

Naysayers of this idea will argue that service academies will become “professional sports factories.” In their minds, a change in policy would lead to a decline in the quality of cadets and midshipmen, while at the same time hindering the academies’ mission to produce quality officers. The counter argument to this scenario is simple: College athletes who go on to to play professional sports are so few and far between, the impact to the academies’ mission would be negligible.

According to the National Collegiate Athletic Association, only 1.7% of college football players play professionally (for basketball players it is even less at 1.2%). The simple fact is, as noted by the famous NCAA commercial of the early 2000s, most college athletes become professionals in something other than sports. Cadets and midshipmen athletes are less likely to play professionally. But if opportunities develop over four years for an academy athlete, why not allow him or her that chance? As long as the academies maintain their already rigorous evaluation process, and there is no reason to believe they won’t, the quality of officers produced for the services will be maintained.

Other critics of this proposal may ask, what if under a delayed-entry scenario, a service academy athlete becomes the next David Robinson, or Roger Staubach, and stays upward of 10 years in the professional leagues? First, a player the caliber of either of those two gentlemen comes along only once in a generation and quite possibly never again. Second, the average NFL career, according to the NFL Player’s Association, is only 3.5 years (NBA careers average around 4.6; Major League Baseball, 5.6). Therefore, one can assume the career of the average professional athlete will have ended before he or she reaches the age of 30, which is still well below the minimum enlistment age for most services. Finally, it can be argued that the “Admiral” and Roger “The Dodger” did more for Navy recruiting in their Spurs and Cowboys uniforms than they did in their Seabee and Supply Corps khakis.

Additional benefits can be seen for both the individuals and the services when the policy is implemented across DoD. Currently, much of the approval authority and processing requirements are delegated down to the respective service secretaries. In the past, this has resulted in the policy being applied inconsistently and unfairly in some cases.

In 2008, the Army’s Caleb Campbell was drafted by the Detroit Lions only to be told one day prior to the start of training camp that he was no longer eligible to play professional football. Approval for Lt. j.g. Eric Kettani, a former Naval Academy running back who graduated in 2009, went back and forth for two years before he was finally granted early release to play for the New England Patriots. This type of indecision and lack of leadership by the service secretaries is unfair to the athlete in question.

From the services’ perspective, when an athlete must return to active duty following completion of their professional careers, there is no inclination to provide preferential treatment in terms of assignment duty. This helps avoid controversy and excessive congressional oversight, such as what happened in the 1980s with the likes of Napoleon McCallum, a Navy running back who was drafted by Oakland Raiders in 1986; and Eddie Myers, a Navy running back who was drafted by the Atlanta Falcons in 1982. Sen. Gordon Humphrey of New Hampshire requested a report regarding perceived preferential treatment of those players. While the findings of the report were inconclusive, the fact that additional oversight was conducted was not in the best interests of the service or the individuals.

Another problem with the existing policy derives from the many false hopes offered in the final years of a promising service academy athlete’s career, only to be retracted once they are on active duty. Midshipmen and cadets are sometimes afforded the opportunity during their senior year, or immediately post commission, to attend the NFL combine or workout during a professional team’s training camp. The perception is that the athlete can apply for an early release and hopefully be granted it. However, in the recent past, only a few individuals have been afforded the opportunity to leave after two years of service while others, such as Mitch Harris of the St. Louis Cardinals, were denied any amount of early release time at all. Certainly there have been denials because we have been a nation at war, but why allow an individual to go through a combine, play in a summer league, or be eligible for the draft when the final decision will be to ultimately retain the athlete on active duty?

As for how to decide which athletes are allowed delayed entry, the reasonable option is through capitalism: Let the market decide. The Patriots have surveyed the market and made their commitment to Cardona using one of their NFL draft picks. Now it’s time for DoD to make the same type of commitment with a fair and balanced department-wide policy.