People sometimes assume that the best war stories are fact based. Logic tells us that truth is more authentic than … Continued 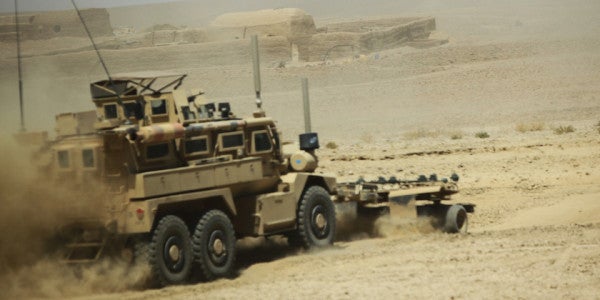 People sometimes assume that the best war stories are fact based. Logic tells us that truth is more authentic than fiction. But Adrian Bonenberger and Brian Castner challenge that assumption in a new anthology of short story fiction, “The Road Ahead: Stories of the Forever War.”

In one story, “Blake’s Girl” by Eric Nelson, the main character, Dave, wrestles with his stifling grief and guilt because his best friend Blake died in combat, and he’s in love with Blake’s girlfriend, Amy. Nelson capturesthe bizarre alternate reality of experiencing loss in combat in one crushing line. “It was as if Blake died in the dream, but when they woke up he was really dead.”

The literary portraits of the post-9/11 war that Bonenberger and Castner have compiled feel authentic, gritty, tragic, and real. Though at least nominally fiction, you can imagine that the hardships in these stories may have actually happened to someone, somewhere. The stories live up to a curious characteristic of fiction: that sometimes the imagined trials of the human condition contain more truth than the Truth.

The range of war related experiences in the stories is both broad and specific. From Alex Horton’s “Small Kill Team” about a soldier anxious for his first kill, to Brandon Caro’s “The Morgan House” about an overzealous captain at a soldier rehabilitation home, the narrative themes are universal — even for those who have never served. Any career-minded person can understand wanting a promotion — even if, as in Elliot Ackerman’s story, “Two Grenades,” promotion hangs on the brutal criteria of whether the person has seen combat or not.

Related: Overpaid, Oversexed And Over The Military: A Review Of ‘War Virgin’ »

Among the strongest pieces is Nate Bethea’s “Funeral Conversation,” in which a platoon is ordered on a 24-hour mission in search of a kidnapped soldier through Taliban-controlled terrain. Bethea takes the reader into the wasteland where the soldiers encounter pestilence, disease, maggots, and misery. The story is dense but dynamic. Bethea’s style of short statement descriptions gives the reader time to process the lurid details of the scene. Things come to a head when higher headquarters orders a battle damage assessment and the soldiers must talk to the village survivors of their platoon’s deadly mortar attack.

The authors’ own stories, “American Fapper” and “The Wild Hunt” — and others such as “Bleeder” by Matthew Robinson — stand out among the rest. The narratives not only tell a good story, but also say something bigger about the Generation X and Millennial warrior.

But the anthology has shortcomings, too. In some stories, the plots don’t add up and seem virtually non existent.

Lauren Kay Halloran’s “Operation Slut” and a handful of other female-centered stories portray the strange, often awkward space military women occupy among their male peers with authenticity; a space that lies somewhere between inconspicuous service member and member of the opposite sex. But among these, only a certain type of female service member is portrayed: One who is young and without children. Sexuality features prominently. Women dealing with issues around maternity or physical weakness as compared to men — with aspects unique to women in the military — do not feature at all.

Nevertheless, this is an important book. As the editors point out in the preface, never in our history has a force been so educated. I would also add that never in our history has a war on this scale been fought by so small a portion of the population. It’s possible — likely even — that these pages from a handful of writers will come to define the warrior perspective for this generation. For that reason, this book is relevant. Its stories are tragic, moving, violent, and devastating, but not always in the ways one expects. It’s enough to enlighten those most insulated from the war.