When We Say ‘Combat Veteran,’ What Do We Really Mean?

The term 'combat veteran' has led to some heated vet-on-vet action, as recent political candidates have attacked each other's service... 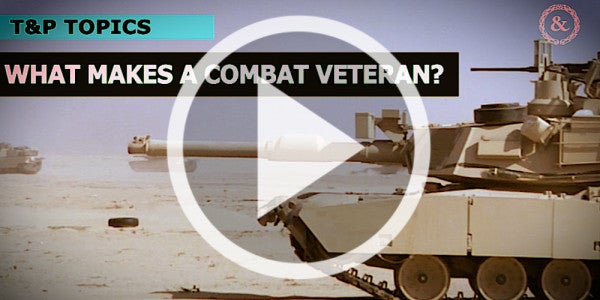 The term 'combat veteran' has led to some heated vet-on-vet action, as recent political candidates have attacked each other's service in the Global War on Terror in ways that are at best confusing to the outside public and at worst damaging to the civil-military divide overall.

All of this verbal sparring makes the question of what really defines a “combat veteran” more relevant than ever. Here's how Andrea Goldstein and Kate Krantz put it in a recent op-ed for Task & Purpose:

In Operations Iraqi Freedom and Enduring Freedom, women served “in support of” but directly alongside special operations units as members of “Cultural Support” and “Female Engagement” Teams. Nevermind that these women were specially trained alongside their male counterparts and deployed to the exact same dangerous areas. Words matter, and as long as we didn’t say women were serving in combat, they weren’t there. Combat becomes a moving target: if your foot doesn’t physically kick in a door, it's not combat, right?

What do you think? Leave your thoughts in the comments section below.