In 1775, the Second Continental Congress wrote 69 Articles of War that established standards of conduct for Continental Army officers … Continued 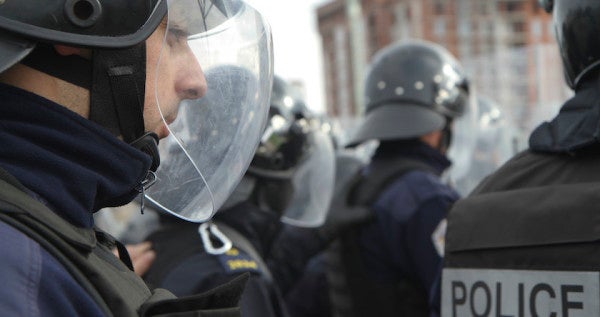 In 1775, the Second Continental Congress wrote 69 Articles of War that established standards of conduct for Continental Army officers and soldiers. Over time, these articles evolved into the Uniform Code of Military Justice — the laws our service members must follow today.

For example, for a civilian to cheat on their spouse might be morally wrong, but they can’t be arrested or put in jail for it. This is not the case for soldiers and officers of the Armed Forces, where adultery is punishable by up to a year in confinement. After volunteering to serve in the military, you can be arrested for disrespecting your boss, making fun of Congress, or playing cards with a co-worker.

As a result of this high standard, surveys have consistently ranked military officers as one of the most prestigious professions; police officers are typically not too far behind in the rankings.

But the laws that govern police conduct are built through an amalgamation of common law and federal, state, and local statutes, guided by and derived from the constitutional protection against unlawful search and seizure, due process rights, and prohibition of cruel and unusual punishment.

Police brutality against minorities, especially black men, is seemingly woven into the fabric of our national history, from coordinating efforts to capture and punish runaway slaves, to complicity in the countless lynchings within the deep south, to the enforcement of Jim Crow laws and segregation. To offer more recent examples, we need only to recall the stories of Rodney King, Amadou Diallo, Prince Jones, Sean Bell, DeAunta Terrell Farrow, and many others. In the past week, two more black men were killed by police despite the fact that they did not appear to pose a deadly threat to the lives of the officers involved. The frequency of these events is astonishing and the American public and lawmakers must think about coordinating the legal standards governing the conduct of law enforcement professionals, into a kind of “Uniform Code of Police Justice.”

Most police officers involved in incidents of excessive or deadly force are never punished.

This is at least partly due to the fact that each state and local government has different definitions for concepts such as “self-defense,” “excessive force,” and “resisting arrest,” and different standards for the use of deadly force and the punishment of excessive force. The result is that thousands of minorities have faced abuse and even death at the hands of police without any semblance of justice or impartiality.

The federal government must eliminate some of this ambiguity so that police officers and the public are fully aware of the boundaries within which each group can operate.

The need for this new “National Law Enforcement Code of Conduct” is clear. Congress should establish a national standard overseeing the conduct of all law enforcement personnel through nonbinding guidelines. Similar to the advisory but integral role of the Federal Sentencing Guidelines, this code of conduct would provide definitions of terms such as “excessive force” to clarify the constitutional boundaries of police conduct.

The 5th Amendment of the Constitution requires that “No person shall … be deprived of life, liberty, or property, without due process of law.” The lack of consistency among state and local law enforcement agencies’ use-of-force policies and procedures leaves room for a sizable gray area, where the rights of citizens are not clearly protected and the responsibilities of police officers is not clearly defined. The Federal government has an obligation to ensure that the Bill of Rights is enforced uniformly throughout our nation.

As long as this code of conduct clarifies police behavior on the job, it is not likely to infringe upon the policing power that is constitutionally reserved for States. Uniform guidance for grand juries and the judiciary regarding lawful police conduct would counter the implicit biases prevalent in current misconduct proceedings.

Will the creation of a police code of conduct prevent any incident of police brutality from ever happening again? Probably not. Mistakes can always be made, and there is always the risk of bad actors slipping through the cracks in the hiring process. Even in the military, there are those who violate UCMJ and then face their punishment if found guilty of the crimes through the court martial process; the difference is that there is a clear set of rules and regulations that define illegal behavior for all Servicemembers.

Almost a million police officers around the country interact with citizens on a daily basis without using force or violence to protect and serve their communities.

But the regularity with which minorities experience police violence reveals the systemic issues that have been highlighted in recent months. If we are willing to provide military equipment and training to our local law enforcement, let us also share their higher standards of behavior with police. The creation and maintenance of high moral and ethical standards has played a large role in the professionalization of the military and thus, the respect and trust garnered by service members from the public.

While I applaud the service of those who choose to don a police uniform for the betterment of their communities, those individuals must continue to perform their job in a highly professional manner to maintain the trust of the American public. Creating uniformly high standards will begin the process of strengthening or regaining this trust and developing a relationship with the communities in which they serve. Over time, this will decrease the tension, apprehension, or hostility, frequently seen in police interactions and make the job of enforcing the law in these neighborhoods much safer for police and citizens alike.

We must create and enforce a higher standard for police conduct that matches their level of authority and ensures that this authority does not go unchecked.