The Sergeant Major Of The Army Really Likes ‘Pinks And Greens’

For months, rumors about the return of the Army’s iconic “pinks and greens” service uniform have percolated through the Private... 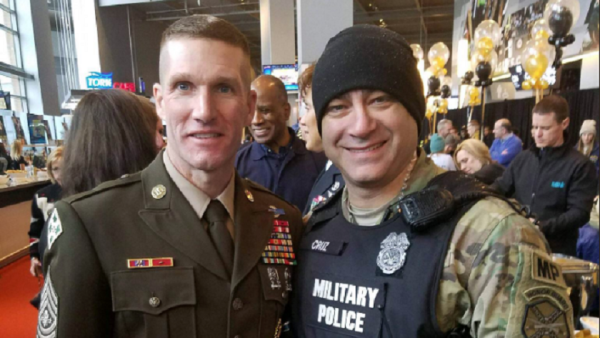 For months, rumors about the return of the Army’s iconic “pinks and greens” service uniform have percolated through the Private News Network and bubbled up in military news outlets. Then on Dec. 9, Sgt. Maj. of the Army Dan Dailey sported the prototype duds at the annual Army-Navy football game in Philadelphia. And man, does he like ’em.

And the streak continues!! Pinks & Greens gave us good fortune at the #ArmyVsNavy snow game! It powered us to VICTORY!!! #ArmyStrong @USArmy pic.twitter.com/7qsGkxD82D

Though the Army is still debating whether or not to bring back the World War II-era threads — with a decision expected by Spring 2018 — the service hasn’t been shy about showing off the pinks and greens since their first unveiling at the October AUSA convention in Washington, Army Times reported. If adopted, the pink and greens would replace the existing blue Army service uniform for all but official events.

Dailey, it turns out, is passionate on the subject. Really passionate.

“The chief and I agree that we need a service uniform, something a soldier can wear day-to-day when they’re not wearing the battle dress uniform, and they can feel and look like professional soldiers,” Dailey said in a Dec. 6 public affairs video.

“We’re also in another time of history where there’s this great nationalism throughout our country and this great respect for our soldiers,” he added. “And we want to show off our great soldiers, and we think the pinks and greens uniform is the right uniform to do that.”

Related: The Army Is Close To Finalizing Pinks And Greens Uniform For All Soldiers »

But why this uniform — a remnant of our grandparents’ and great-grandparents’ total war against fascism — at a time when the force is stretched out across the globe on a variety of wars, skirmishes, and odd jobs?

The Army’s top enlisted leader says: nostalgia, plain and simple. “This is the symbol, for me, of the American soldier,” Dailey said. “Still to this day, people can remember what a soldier looked like in the pinks and greens.”

You can’t capture the can-do vibes of the greatest generation if you don’t stay true to what made its uniform so iconic: the look. A sleek olive green and khaki (i.e., “military pink”) ensemble, the uniform is a hybrid business suit with a dab of military chic — aided by a chestful of ribbons and badges. The basic uniform issue for the “pinks and greens” would be pants, jacket, shirt, socks, shoes and a cover.

But the 21st century pink-and-green kit — if approved — would also showcase higher-quality materials and features, which Dailey says will produce “a uniform that’s going to last longer and be very functional and fit very well for our soldiers.”

Though Army Times reported in February that support for the new uniforms is high, some soldiers — particularly officers, who don’t get a clothing allowance — have raised concerns over what the new look will do to their bank accounts.

But Dailey clearly is willing to put a price on the morale boost he expects World War II threads to provide to the Army.

“I still think that was a point in history when our soldiers were highly respected and there was a sense of nationalism throughout country,” he said. “And when you looked down, you said, ‘Man, that’s an American soldier.’”