The DoD Will Finally Encrypt Service Member Emails. Here’s What That Means For You

In a letter to a watchdog lawmaker last week, the Department of Defense confirmed that it will finally, in 2018,... 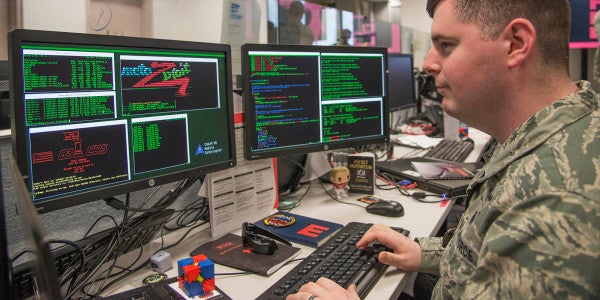 In a letter to a watchdog lawmaker last week, the Department of Defense confirmed that it will finally, in 2018, join the 21st century and use a popular basic encryption tool to help make emails to and from .mil addresses more secure. What does that mean for your badass joe.schmuckatelli@centcom.mil account? Let’s break it down.

The move came after years of poking around by the reporters at Vice and some tough talk from Wyden questioning how the military’s 4.5 million-user cloud-based email service had never implemented STARTTLS before.

“I can't think of a single technical reason why they wouldn't use it,” one former U.S. Special Operations Command IT whiz told Vice. A hacker and former Marine similarly told the outlet: “The military should not be sending any email that isn't encrypted, period. Everything should get encrypted, absolutely everything. There's no excuse.”

How does STARTTLS work?

Vice’s Motherboard blog has a nice breakdown of STARTTLS, which is what’s called an “opportunistic” encryption app. Basically, when your email server and a recipient’s email server hook up to exchange info, STARTTLS sets up the exchange on the fly as an encrypted transaction. When your emails are sent out into the world without encryption, opportunistic or otherwise, they are as readable as postcards, per Vice:

Is that a big deal?

Kinda, yeah, but not super-big. STARTTLS has been around since 2002, and Gmail first implemented it in 2004. Vice points out that Google and your other popular private email and social-media sites — including Microsoft, Yahoo, Twitter, and Facebook — have already integrated STARTTLS. In the wake of the NSA surveillance disclosures by contractor Edward Snowden, Facebook led a very public charge to get more sites to use STARTTLS to keep the feds from looking at your emails.

So there’s nothing new here; DoD is simply catching up to a basic encryption technology that’s been around for a decade and a half — long enough now that the vast majority of emails you send and receive communicate with another STARTTLS-equipped server. It has some weaknesses, and it ain’t PGP encryption, but it’s a good start.

What the hell took the military so long?

Well, you probably already know from experience that no Pentagon-level IT policy changes overnight. But more than that, keeping mail.mil STARTTLS-free has also given the military a lot more freedom to snoop through your emails — a freedom DISA was probably reluctant to give up. In a letter to Wyden in April, DISA deputy director Maj. Gen. Sarah Zabel said the agency’s software regularly sweeps incoming soldier email for phishing scams, viruses, and the like.

“DISA currently rejects over 85% of all DoD email traffic coming from the Internet on a daily basis due to malicious behavior,” Zabel wrote. “We also inspect for advanced, persistent threats using detection methods developed using national level intelligence. Many of these detection methods would be rendered ineffective if STARTTLS were enabled.”

In fact, top civil liberties groups like the ACLU have long called for government agencies to use encryption not just to protect their sensitive info, but to help establish a broad pro-encryption consensus in America: If the government gets to encrypt its data, then why shouldn’t free American citizens get the same right? Such a norm might not sit well with government agencies, like the NSA, CIA, and FBI, who rely on signals surveillance to further intelligence and investigative aims.

Beyond that, if the military has to triage its IT systems for info security, it’s probably going to tackle unclassified email servers last, after focusing on secure and closed systems like SIPRNET, the National Military Command Center, and Link 16 tactical data transmission networks.

So now my stuff’s going to be encrypted, but it could be easier to hack?

Well, that was DISA’s initial suggestion: Using STARTTLS could make it harder for the Pentagon to catch and neutralize viruses in your emails. But its decision to migrate everyone’s mail.mil accounts to a new STARTTLS gateway by July 2018 suggests whatever kinks the application threw in DISA’s surveillance have now been worked out.

In the meantime, the service is still adamant that you shouldn’t be passing any sensitive info or clicking any weird links in your nonsecure mail.mil account in the first place, so, you know, keep not doing that.