As Syria heats up, the Gulf states get snippy, and North Korea keeps lobbing rockets, the Department of Defense’s top... 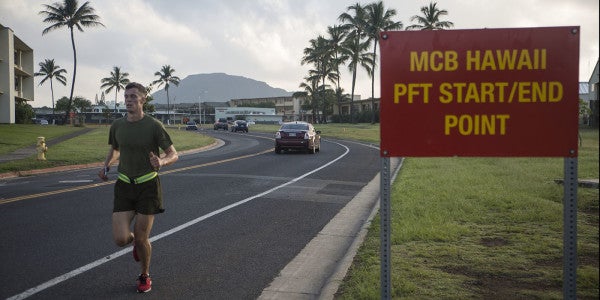 As Syria heats up, the Gulf states get snippy, and North Korea keeps lobbing rockets, the Department of Defense’s top military planners are doing what they always do: reviewing maps, rehearsing routes in their heads, planning to engineer new paths and obstacles, and trying to anticipate where resistance will come from.

Their objective: to make you move around more, you lazy fatbodies.

The Atlantic’s CityLab took a deep dive into how the Pentagon is using “active design” trends in urban planning to make its military bases more amenable to walking, running, biking, and generally not being an unsat dirtbag.

The “Healthy Base Initiative” isn’t new — the Pentagon’s implemented it on 14 installations since 2014 — but in addition to improving healthy food choices on post, DoD planners are also looking for “quick micro-changes” to base infrastructure and family accommodations to encourage active lifestyles, like bike shares, healthy food trucks, and more walking trails.

“Our installations were built for the automobile,” Ed Miles, the Pentagon’s director of strategy and innovation for military community and family policy, told City Lab. “They weren’t built for walking, for biking.” But military bases have one advantage: They’re islands unto themselves, making them great places to experiment with infrastructural tweaks.

What does all that mean to Cpl. Schmuckatelli, though? Here are some examples of the base fixes you could see someday:

These all may sound terrific, and many of the advancements detailed by CityLab have already been made on a variety of bases, from tiny New London to sprawling Fort Bragg. But don’t get too excited about your crunchy, military-supported granola lifestyle just yet.

“Whenever you’ve got to build something on a military installation, things like that are in the planning process for years,” Miles told City Lab. “I mean, years.”

That should give you plenty of time to figure out how to cook the bok choy.

active lifestyles
base life
base living
Fitness
Healthy Base Initiative