If You’re In The Military And Don’t Vote, You’re Neglecting Your Duty

There is an unwritten code in our armed forces that those serving, especially officers, should not vote in U.S. elections.... 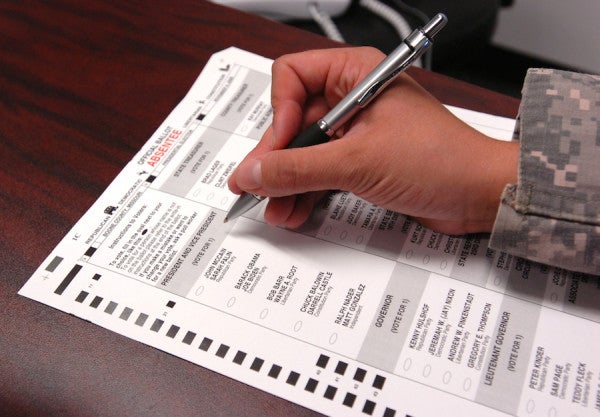 There is an unwritten code in our armed forces that those serving, especially officers, should not vote in U.S. elections. The most famous service member to follow this precedent was Gen. George C. Marshall, who served as Army chief of staff, secretary of state, and secretary of defense during World War II and the Cold War. The logic behind his decision not to vote stemmed from a desire to avoid partisan politics, because it would distract him from keeping the oath that commissioned officers take when joining their branch of service and upon every promotion, to “…support and defend the Constitution of the United States against all enemies, foreign and domestic…”

Marshall believed voting was counterintuitive to serving the country in uniform no matter who won the election, and he reportedly never voted in his life. While this commitment to not vote earned him the trust of those he advised, including President Franklin D. Roosevelt, it deserves some reconsideration in the present day.

When discussing voting with fellow service members and veterans, I express the imperative for them to vote in off-year and mid-term elections, especially those for local town councils and state-level senators and legislators. These elected officials are the individuals who influence our everyday lives and responsibilities — property taxes, gas prices, school funding, etc. — much more so than U.S. senators and congressmen. Contrary to popular belief, our federally elected officials have very little impact on our daily lives. Local politics is where the rubber meets the road.

However, when it comes to federal elections, it is extremely important to pay attention to senators and congressmen who determine the amount of appropriated funds allocated toward the various programs and services within the departments of Veterans Affairs and Defense that ultimately support military communities. We have duly earned these benefits and programs, and in order to ensure that they remain in place, it is imperative that the military community gets behind those representatives who properly and honorably support us.

But, simply voting is not enough. Military members and their families must truly educate themselves as to whom they are empowering to hold elected office. Partisan politics should never come into play when it comes to veterans and military family issues. No single party owns or should own the veteran vote. There are both Democrat and Republican senators and congressmen who effectively support veterans and military family issues, but there are also those who do not. And, to make matters worse, many senators and congressmen who do not support veterans and military family issues, wrap themselves in our nation’s flag and espouse to support our concerns, when the reality is, they vote against every piece of veterans-related legislation that crosses their desks. These types of elected officials tend to use veterans and their family members as nothing more than pawns to garner votes during election seasons.

At the end of the day, too many people have fought, suffered, and died for our right to vote. As veterans, we have upheld this right and the ideals in which they inspire. Voting is yet another form of serving our country.