This month, the United Nations Commission of Inquiry on Human Rights in Eritrea released a 500-page report detailing “systematic, widespread... 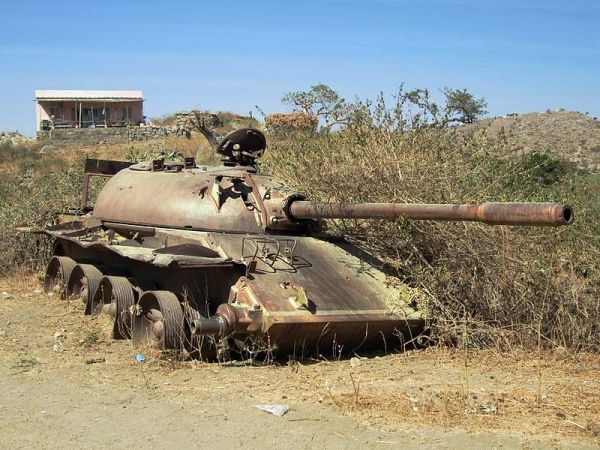 This month, the United Nations Commission of Inquiry on Human Rights in Eritrea released a 500-page report detailing “systematic, widespread and gross” human rights violations that have spurred hundreds of thousands of people to flee the totalitarian East African country.

Related: Without A Bomb, What Is Iran’s Military Capable Of Doing? »

Many are fleeing open-ended mandatory service in the Eritrea’s military, where there is no rule of law and harsh punishments involving torture are meted out at the whim of individual officers. It’s a major reason why more migrants have fled to Europe from Eritrea in 2015 than from any other African country.

Conscripts are forced to serve indefinitely for decades. Eritrea’s National Service Proclamation states that mandatory active national service should not last more than 18 months, with exceptions during time of war. In reality, that limit is not adhered to even though Eritrea is at peace.

Testimonies reveal conscripts are commonly forced to stay in the army forever, or until they escape. One conscript who fled the military reported to U.N. investigators that one of his brothers is still being forced to serve in the army 19 years after being drafted. Another told the U.N. he never knew of anyone being discharged, including soldiers who were obviously unfit or disabled after many years in service. Others are conscripted into national service outside of the military, also for indefinite periods of time. Conscripts are only paid a small amount of pocket money throughout their service.

In 2014, the Eritrean government announced it would adhere to the 18-month limit for future draftees. “There is a lot of scepticism as to whether the Government will this time fulfil its promise, as it has made similar announcements in the past that were never followed through,” the U.N. report says.

“Indeed, the indefinite duration of national service, its terrible conditions — including arbitrary detention, torture, sexual torture, forced labour, absence of leave and the ludicrous pay — and the implications it has for the possibility of any individual to found a family, conduct a family life and have favourable conditions of work make national service an institution where slavery-like practices are routine,” states the U.N. report.

Requesting leave can land you in prison. Conscripted members of the military are arbitrarily arrested and detained for making requests to superiors regarding leave, payment, or discharge from the military. The same goes for simply asking questions, expressing opinions, or voicing a complaint.

For example, during the 1998–2000 war with Ethiopia, one conscript was informed by his superiors that if he died from a wound he received, his military compensation would be transferred to his parents. When the conscript asked if the compensation could instead be paid to his brother since he was an orphan, he was imprisoned for three months, according to an account he gave U.N. investigators.

Another former conscript gave this account: “In June 2013, after a general meeting of , I approached to request for leave to see my family. I did not get a response. However, later the leader of my Battalion was asked to search for me. I was brought to the Brigade leader who indicated to him that at next meetings I should not speak or ask, otherwise I would be killed. I was asked to sign a paper, was arrested and detained for 25 days.”

Practicing any religion will result in severe punishment. Starting with their arrival at military training, Christian and Muslim conscripts alike are informed that practicing any religion is prohibited. One former military clerk whose duty was to record punishments at his military camp told investigators typical punishments for practicing religion were five to seven months imprisonment, with the option to reduce the sentence by pledging not to repeat the offense. The clerk claimed there were 11 cases of imprisonment for religious practices at his camp alone in 2014. Others have been subjected to mistreatment and torture.

“On one occasion, a Muslim was killed in front of us for praying,” said one former conscript, quoted in the U.N. report. “After we were all gathered, the leader read a page of information to us. Basically it said this man has been caught praying against our orders three times and is being sentenced to death. Anyone who does not obey military orders will also be killed. The Muslim man was then shot twice and killed.”

There is a pervasive practice of rape and sexual abuse by military officers. When female conscripts arrive for military training, officers often pick out the most physically attractive and assign them to their personal training teams, where they are forced to serve as their domestic maids. Many of these young women, some younger than 18, are treated as concubines while performing these services, suffering rape and sexual abuse.

“Two to three girls were serving the colonel,” a former conscript told U.N. investigators. “Even the lower ranks in charge of 10 people were also served by one or two girls. They were washing clothes, cooking and forcing them to have sex. Some of the women refused and they were making their life very difficult.”

Another practice is to have trainees rounded up at night and brought to officers’ rooms for the sole purpose of rape. Former conscripts reported that between 70 and 90% of female trainees suffer sexual abuse. One former personal assistant reported that during five months of service at a major military training center in the mid 2000s, he personally delivered one to two female trainees to commanders’ rooms each day.

“[T]he enforced domestic service of women and girls who are also sexually abused in these camps amounts to sexual slavery. ” states the U.N. report.

When soldiers desert, the government holds their family members as hostages. In order to prevent widespread desertion and induce deserters to return to their units, Eritrean authorities detain a close family member of the deserters, including siblings, parents, pregnant wives, or elderly relatives. If the deserter cannot be recaptured, the rest of the family is forced to pay a significant fine to have the hostage released from imprisonment. Conscripts at military camps are often subjected to arbitrary arrests and imprisonment based on the mere suspicion that they are planning an escape.

In the United States, individuals join the military as a way to serve their country with honor and pursue new career opportunities. But that’s not the case in Eritrea, where men and women risk their lives and those of their families just to escape military service. As the U.N. report recommends, Eritrea should adopt a military code and complaint mechanism that forbids and punishes the mistreatment and exploitation of conscripts. It needs to also begin seriously complying with its own 18-month limit on national service. Only then will Eritrea’s draftees be able to call themselves soldiers instead of slaves.