Editor’s Note: A version of this article originally appeared on Small Wars Journal in February 2013. A few years ago,... 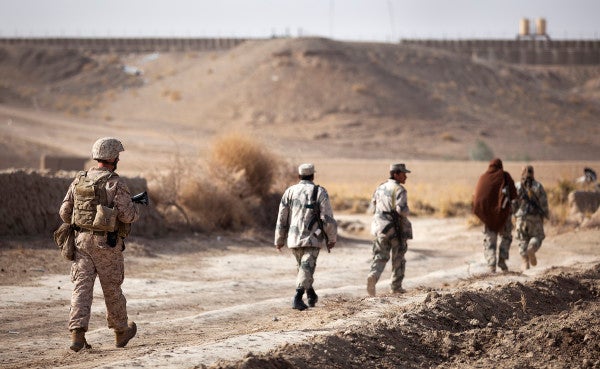 Editor’s Note: A version of this article originally appeared on Small Wars Journal in February 2013.

A few years ago, I got stuck with what I thought was a bad deal at the time. I went to Camp Pendleton to relearn all the “grunt” skills, like tactical shooting and patrolling that I’d forgotten about years before, as well as to learn some basic Pashto, field medicine, negotiation, and so on. Then, I deployed to southern Helmand province, Afghanistan, with a team of similarly trained Marines to work with a battalion of Afghan Border Police. Included in my responsibilities was the mentorship of an Afghan battalion executive officer and a company commander. Surprisingly, in the end, I think I learned more from the Afghans than they did from me. It turned out to be one of the most rewarding experiences of my military career. Whether that’s a comment on my weaknesses or their strengths I’ll leave for others to judge.

In 1988, Robert Fulghum wrote a book called “Everything I Really Need to Know I Learned in Kindergarten.” The homespun wisdom borne of the basics we teach children was a sensation at the time. Its advice, such as “Play fair” and “Don’t hit people,” is still as true at age 55 as it is at 5. Of course, there are some things one needs to know that are not taught in kindergarten — driving and sex education come to mind. But the point is that much of what we really need to know to be successful is really just the basics. Just as adults forget the simple lessons of childhood in favor of the complexities of adulthood, often to their detriment, so do militaries. In our sole-superpower, globe-spanning dominance, we have lost much of our former speed, flexibility, and mental agility. Just as adults can learn from children, so can Americans can learn from Afghans. Some of what makes Afghans effective are traits that Americans have lost in the course of industrializing warfare.

There is such a thing as too much planning.

Sometimes things really are as simple as they look. Afghans with no formal education and only the most basic military training can execute vehicle checkpoints, airborne interdictions, “high value individual” snatches, and most of the basics of counterinsurgency without a single PowerPoint slide. If Afghans can successfully do these missions on a moment’s notice, why can’t Americans? Americans frequently get sucked down rabbit holes planning to counter every contingency and mitigate every risk. While we pride ourselves on detailed planning, sometimes we forget that sometimes a simple mission is just that. There are missions that require lengthy and detailed planning, but many do not. Americans often plan operations for so long that the situation that necessitated an operation in the first place has long since passed by the time we are ready to act. In our zeal to answer every question, we often paralyze ourselves with inaction.

Risk is part of war.

Afghans are consistently willing to put themselves and their troops in danger when the mission requires it. Among other things, they are encouraged to use field expedient methods in order to complete the mission in a timely fashion. While clearly some specific Afghan techniques are unsound (shooting at improvised explosive devices comes to mind), Americans have overcorrected, eliminating risk to the point that the mission becomes secondary to adherence to rules established at higher echelons. In many cases, American small-unit leaders are not allowed to make judgment calls about the composition and conduct of patrols. Lives and equipment are valuable, and should not be spent lightly. However, it may be someone else’s country, and we may not be there much longer, but as long as we are in a fight, we need to act with a sense of commitment to fighting, not just to avoiding losses. Running out the clock may win in sports, but is not the way to victory in war.

Speed and mobility can be force protection.

Afghan troops wear little body armor, and most of their vehicles are unarmored. While body armor and armored vehicles may be necessary in high-kinetic environments, much of the time they cripple the mobility and agility of the forces using them. On partnered operations, Afghans greatly outpace American troops, both on foot and mounted. Their vehicles can go where ours cannot and travel at much greater speed. American MRAP vehicles do only one thing well — survive explosive blasts. In every other regard, they are deficient. They are lumbering, difficult to enter or exit, and the armored cocoon saps the situational awareness of the entire crew. They are largely roadbound — even the MRAP all terrain vehicle variant loses most of its off-road capability when encumbered with a mine roller. In most environments, IEDs are best countered by simply staying off roads and trails, which American vehicles are often unable to do. If engaged, the ability to displace rapidly can be more valuable than additional armored protection. The same holds true for protective equipment. Regardless of the mission, conventional American troops are required to wear a minimum of 40 pounds of gear, even before accounting for sustainment. This makes them unable to move at any pace faster than a quick shuffle, rendering them immobile in terms of covering any significant distance or to maneuver against an enemy. This immobility is often more dangerous than any lack of protection would be.

Afghans are well-known for having a poor logistics system. While this has continued to hamper the Afghan military’s development into a more capable force, it has also fostered innovation and required commanders to get by with less. We Americans have a tendency to bring everything but the kitchen sink with us, just in case we need it. This cripples our ability to act quickly by increasing equipment requirements, which increases planning time, and further decreases tactical mobility. Americans will never be able to live off the land as Afghans do, drinking from streams and resupplying from bazaars, travelling light increases operational tempo. We often find ourselves in an escalating spiral of requirements. We bring extra vehicles in case the primary vehicles fail, which necessitates more recovery assets, which requires more fuel, which requires vehicles to carry the fuel, which requires more vehicles to escort the fuel vehicles, and so forth. The Afghan mindset is often closer to the expeditionary mindset we should be trying to achieve. Keeping things as simple as possible and reducing logistical footprints can reduce risk.

Aggressiveness can make up for a lack of skill.

In initial military training, Americans are hammered with truisms about such things as “speed, surprise, and violence of action.” Later, the importance of these in warfare receives only lip service. When one has only his rifle and his comrades to rely on, the only thing that keeps one going toward the sound of battle is his determination to close with and destroy the enemy. Every day, Afghans push through dangers that would stop American units in their tracks. Most American units will not drive across a single Afghan street without mine rollers and electronic countermeasure equipment. American units stop even routine movements when air support is unavailable. Afghan troops execute virtually all of their operations operating under what Americans would consider “no-go” criteria. While restraint and discretion certainly have their places in military operations, leaders should never emphasize them to the detriment of aggressiveness and a bias toward action.

Don’t be afraid to leave a subordinate in charge.

While it is true that the Afghans lack a professional noncommissioned officer corps, in certain other regards they are more decentralized than some American units. Many leaders in the American military are afraid to allow subordinates to make decisions in their absence. Often, they insist on receiving updates on even routine matters while they are gone. On the other hand, Afghan unit leaders are often gone for days or even weeks at a time, leaving subordinates completely on their own. This is in a land where communication technology is lacking, so subordinates are truly working without nets. While this situation is partially due other systemic problems, the result is frequently the development of trusted subordinates who have the ability to run a unit on their own. Few Americans are willing to delegate more than symbolic authority to subordinates, for fear that those subordinates will make mistakes. In reality, while they may make some errors, the errors are rarely catastrophic, and the subordinates learn in the process. Subordinates usually rise to the challenge and become better leaders themselves.

Uneducated does not mean stupid.

Americans value education, and it is important in a technologically advanced force. But we also look down on those who do not have formal education. The average Afghan spends his entire life living in conditions that most Americans would consider military-caliber survival training. He continuously has to improvise solutions to problems. Once one realizes the value of this type of learning, it prompts two “eureka moments.” One, never underestimate the capability of a man who has grown up in such an environment. There is a reason that some Afghans, having never taken a chemistry class, can turn ingredients found in a typical hardware store into bombs capable of throwing 30,000-pound vehicles into the air. Two, it shows us that just because a procedure is nowhere in any manual does not make it invalid — Afghans devise effective solutions that are not found in manuals because they can’t read the manuals. Americans need to know when to use the manual, and when they need to pretend it doesn’t exist.

No better friend. No worse enemy.

Reward those who cooperate with you. In counterinsurgency, one’s friends have to know that there are advantages to cooperation. It is often better to live with a little evil if that allows one to defeat the bigger evil. In Afghanistan, one can see this in the government-led eradication programs. While some areas are indeed so corrupt that major traffickers own the entire area, in other areas selective enforcement can be a viable tool. If the government can’t eradicate all the poppy harvest, then at least the farmers who don’t harbor the enemy should be left alone. If someone is not cooperating, make his life hard. In the parts of Afghanistan where law enforcement is more effective, that means known bad actors get searched, get treated roughly, their poppies get destroyed, and their equipment gets confiscated. If enough fence-sitters see the upside of cooperation and the downside of opposing the government, an area can begin to turn.

In the end, armed forces are bands of brothers (and sisters) who put their lives in one another’s hands. Afghans always greet every individual warmly and will take the time to sit down and discuss any issue, whether business or social. Personal interaction is what makes everything happen. Personal relationships are often an afterthought in American forces, especially in garrison. Training is done via computer. People e-mail instead of calling or walking down a hall. Whether it is over a cup of Afghan sheen chai, or over an American Budweiser, troops need to have the time and opportunity to form those bonds that let them trust one another when the chips are down. Beyond that, Americans neglect the value of face-to-face interaction. Giving an informal class can be more effective than death by PowerPoint. Stopping by someone’s office is usually more effective than sending an e-mail.

As individual military leaders progress through their careers, they pick and choose attributes from other leaders that they try to emulate. The same should apply for militaries. There are certainly many qualities of the Afghan military not worth copying, but there are certain things at which they excel, and Americans need to have the institutional humility to learn from them.