Two US F-22 stealth fighter jets intercepted Russian Su-25 and Su-35 jets that crossed into the US's area of operation over Syria... 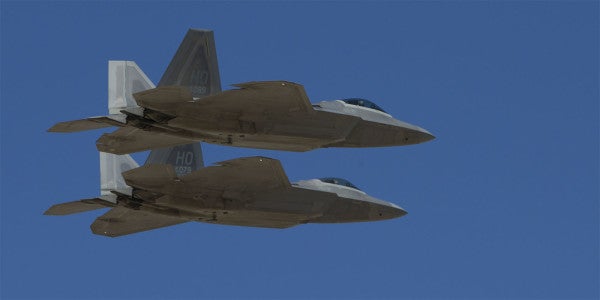 Two US F-22 stealth fighter jets intercepted Russian Su-25 and Su-35 jets that crossed into the US's area of operation over Syria on Wednesday, and it highlights a downside to the US's top fighter jets.

Related: Did US F-22s Almost Shoot Down Russian Aircraft Over Syria? »

The F-22, with its incredible acrobatic abilities in air and all-aspect stealth cloaking it from enemies at a distance, is the US's most lethal combat plane.

While the F-35 has been built as a flying quarterback that can dogfight, bomb ground targets, gather intelligence, or conduct surveillance, the F-22 specializes in one thing: air-to-air combat.

But with today's rules of engagement, the F-22's huge advantages in stealth mean little.

During an intercept, a jet pulls up next to the plane that has invaded its airspace and tells the plane via radio some version of “turn around or this will escalate.”

At this time, it's customary for the jet to tilt its wings and show the intruding adversary a wing full of missiles. But the F-22 can never do that. Because of its stealth design, the F-22 stores all missiles and bombs internally.

A pilot intruding into US or US-protected airspace and meeting an F-22 really has no idea whether the jet is armed. And the Russian Su-35 holds more missiles than the F-22, and it holds them where everyone can see.

On top of that, if a routine interception were to turn kinetic, the F-22 would start the battle at a huge disadvantage.

F-22s rely on stealth and establishing the battle on their own terms. When the enemy jet can't tell where the F-22 is, the F-22 pilot's preferred course of action is to dictate the battle and ideally to score a kill without ever being seen.

If a fight were to start during an intercept like the one this week, the Russian pilot would start with the huge advantage of having the F-22 in sight. What's more, the Russian Su-35 can actually maneuver better than the F-22.

Lt. Col. David “Chip” Berke, the only US Marine to fly both the F-22 and the F-35, previously told Business Insider that when flying the F-22, “my objective wouldn't be to get in a turning fight” with an adversary. Instead, Berke said he would use the F-22's natural advantages of stealth to avoid the dogfight.

But just because Russia's Su-35 can turn better and has more missiles doesn't mean it would automatically win a dogfight that broke out from an interception. The capabilities of the F-22 and of its pilots, who stand among the Air Force's best, would surely give it a chance in such a fight.

But because of the F-22's internal weapons stores and reliance on stealth, Justin Bronk, an expert on combat airpower at the Royal United Services Institute, previously told Business Insider that fifth-generation fighters like the F-22 and the F-35 were “not really necessary” for interceptions and that “other, cheaper interceptors can do the job.”

The prospect of dogfighting with advanced Russian fighters over Syria has only gotten less likely as both Russia and the US look to pull out of the country after the military defeat of the terrorist group ISIS.

In reality, conflicts in the airspace above Syria between US and Russian jets are handled all the time, but not with jets. The US and Russia maintain a deconfliction line and call each other constantly to alert the other side to inbound jets.

But the rules of engagement, as they stand, put the US's top fighter jet at a distinct disadvantage if the worst happened and a dogfight broke out between the world's top military powers over Syria.