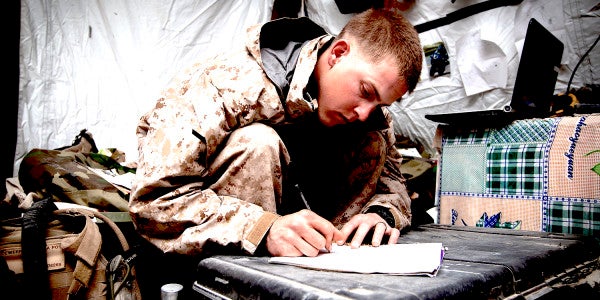 Editor’s Note: Task & Purpose is proud to publish this fictional essay by Michael Sierra — the 2nd place submission of a writing contest presented by the Armed Services Arts Partnership and the Atlantic Council’s The Art of the Future Project. The contest sought letters home from a conflict set in the 2030s as part of a first-person exploration of what homecoming might be like after future wars.

I’m writing you to let you know I’m okay. My unit made it out of Afghanistan and I’m on a big floating hospital a long way from the fighting. I’m pretty banged up. The evacuation from Kandahar was pretty crazy, and not everyone made it out. My elbow was broken, along with my nose, and I have chemical burns on part of my body. Well, a lot of my body. The drugs are great though and I don’t really feel anything, except when the orderly changes the bandages.

I know it’s been a long time since I wrote. Once the satellites were knocked out and comms were messed up our CO made sure all of us had these dumb PADs so we could “write home every chance you get.” She said anybody who bought it without making peace with our families wouldn’t be admitted to Valhalla. I had to look up what she meant. She was all right. She got us all the way to Bandar Abbas, where the squids picked us up, but was killed in the fight for the harbor. Most of my buddies in Kabul or Khost didn’t make it either. They had to fight their way through what’s left of Pakistan, and between the nukes and the mullahs hardly anyone got out. There’s a jarhead in the rack next to me who lost a leg in Karachi that says both India and Pakistan are pretty much gone, or will be soon.

Anyway, I’m dodging what I should be saying. Everyone is making happy faces and telling me my chances are fair, but they are all worried, and more than just about me. AFN says China is fighting India and the Russians are thinking about getting into it. This whole part of the world is crazy. I say let them fight it out and send us all home. I keep thinking about our big argument before I shipped out. You and Mom would have had a hard enough time if you were deported, but I still don’t even speak ten words of Spanish. Signing up was the right thing to do. Arizona sounds God-awful hot, but if we had stayed in San Diego and dodged la Migra, we’d just as dead as Maria and Pepe and all the cousins that were hit by the dirty bombs.

They’ve already given me a Purple Heart on account of my injuries. That’s worth two years. My platoon leader told me Major Barret put me in for a medal called the Bronze Star before she was killed. If they give it me it shaves another five years off my clock to be a citizen, and get you and Mom that much closer to being out of that camp. And if I don’t get better – if the burns are too much for the docs here, I’ll become a citizen posthumously and you guys still get to get out. So it’s win-win either way.

Don’t say anything to Mom or Lita that will scare them too much. Just let them know that I’m safe and thinking of you all and that I’ll be home soon. If I don’t make it, Dad, I want to take back the mean things I said at the bridge. You’ve always been good to us and I don’t blame you for coming North anymore. I’ve had a great run and seen more than most of the kids I came up with. I fought the good fight and I’ll get an NSN one way or another. I didn’t go to Mass often enough, but I’ve been a good. Maybe there is a place in Valhalla for me if I want it.

I promise to write again soon.

NOVEMBER 19th, 2071 SENATOR BRYAN ESPINOSA, REPUBLIC OF TEXAS – GREETINGS – ONE OF OUR ANTHROPOLOGICAL AUTONOMOUS SURVEY UNITS HAS BEEN CATALOGING THE REMAINS OF THE US SEVENTH FLEET AND RECOVERED THE MESSAGE ABOVE FROM THE BUBBLE MEMORY OF A HANDHELD DEVICE OF THE TIME – WE THOUGHT ITS TRANSMISSION, ALBEIT 36 YEARS LATE, WOULD GIVE YOU COMFORT AS THE SENDER WAS A GENETIC RELATION – YOUR GREAT UNCLE – WE LOOK FORWARD TO YOUR UPCOMING PHYSICAL VISIT TO NEW SEATTLE – JOSHUA 13781 / SYNTHETIC INTELLIGENCE / PACIFIC CORPORATE STATES OF NORTH AMERICA – MESSAGE ENDS

Mike Sierra is an Army brat and former infantry officer. He is an executive with a service disabled, veteran-owned small business outside Washington, D.C. He’s hiked with Gurkhas; been sunburned in Diego Garcia; jumped out of various aircraft; been detained by Syrian military Intelligence; transited the Panama Canal on the USS Wisconsin; gotten seasick on an oil derrick in the North Sea; met Idi Amin; fallen asleep in a B-52 and crossed the Arctic Circle on foot. He is the happily married father of two and lives in Leesburg, Virginia.