When the final text of the Declaration of Independence was adopted on July 4, 1776, it was the product of … Continued 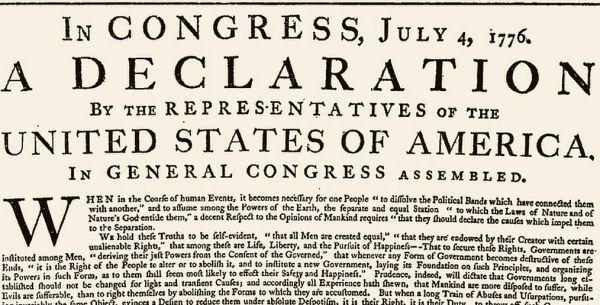 When the final text of the Declaration of Independence was adopted on July 4, 1776, it was the product of months of hotly contested debate among the delegates of the Continental Congress. It was also a very different document than what had been originally proposed by its drafter; a young lawyer and plantation owner named Thomas Jefferson.

The declaration is now celebrated primarily for Jefferson’s profound statement of human rights:

We hold these truths to be self-evident, that all men are created equal, that they are endowed by their Creator with certain unalienable Rights, that among these are Life, Liberty and the pursuit of Happiness.

How then, could the statement “all men are created equal” be reconciled with the fact that in most of the United States, slavery was widely practiced? Jefferson, in fact, attempted to reconcile this idea by including in his original draft an additional statement, criticizing the Crown for its support of slavery. Calling slavery a “cruel war against human nature itself” that violates its most “sacred right of life and liberty,” he noted that the Crown had suppressed “every legislative attempt to prohibit or restrain this execrable commerce.”

As a member of America’s land-holding elite, Jefferson was himself the owner of slaves. He, like many of the signers of the declaration, struggled with slavery as being against the very principles of human rights they were fighting for. Countering this was the very practical concern that the foundation for much of the economy, especially in the South, was built on the free labor of the slavery system.

What this passage also took into account was that Blacks were also playing an important and evolving role in the events of the revolution, on both sides.

By 1776, Massachusetts had been in open rebellion against the Crown for over a year. The battles of Lexington and Concord resulted in British occupying forces being driven back to the city of Boston. Paul Revere had already made his famous midnight ride, and rebel forces had inflicted a pyrrhic victory on British forces at Bunker Hill. Ethan Allen and Benedict Arnold (yes, that Benedict Arnold) had captured Fort Ticonderoga in the Lake Champlain region of New York. In Canada, rebel forces had seized the city of Montreal, and were marching on Quebec. In the south, rebel militia had beaten back the British attempt to seize Charleston, South Carolina.

That is not to say that the war had been going smoothly for the rebels. The Continental Army was disorganized, poorly trained, outnumbered, and outgunned. Commander-in-Chief of British Forces Sir William Howe was assembling the largest British field army ever deployed outside of Europe — a mix of British army veterans and German mercenaries. At sea, the British enjoyed overwhelming strength and blockaded American ports.

In the early battles of the war — namely Lexington, Concord, and Bunker Hill — slaves as well as free black men served with distinction in the militia of Massachusetts. In fact, a former slave named Salem Poor had performed so heroically at the Battle of Bunker Hill that 14 officers of the Massachusetts militia wrote to the Massachusetts legislature recommending Poor for an award for valor as a “brave and gallant soldier.”

The new commander of the Continental Army, Gen. George Washington, was against the recruitment of black soldiers. As a slaveholder, he epitomized the apprehension of many in the South; once black men were trained and armed, and once they saw combat in service of their nation, how then could the slavery system continue to exist? As a result, he issued a general order on November 12, 1775, directing that “neither Negroes, Boys unable to bare Arms, nor old men unfit to endure the fatigues of the campaign” (sic) are to be recruited.

The royal governor of the British colony of Virginia sensed an opportunity. On November 7, 1775, John Murray, 4th Earl of Dunmore issued what has come to be known as “Dunmore’s Emancipation Proclamation,” setting “all indentured servants, Negroes, or others…free that are able and willing to bear arms.” By offering freedom to runaway slaves, Dunmore hoped to both recruit forces for the British military, and drive a wedge between colonists who held opposing views on slavery. As a result, hundreds of runaway slaves enlisted in the British armed forces into what became known as “Dunmore’s Ethiopian Regiment.” Dunmore’s regiment saw service between 1775 and 1776, and its soldiers wore sashes across their uniforms embroidered with the phrase “Liberty to Slaves.”

Within six weeks, Washington partially reversed his November 12 general order, and reopened the Continental Army to free Blacks, though not slaves.

Jefferson was outraged by Dunmore’s proclamation. He saw the inherent hypocrisy in the British Crown, so long an advocate and benefit of slavery, attempting to use those very slaves to put down the rebellion. As a result, the anti-slavery passage included in his initial draft of the declaration attempted to highlight this hypocrisy:

… he is now exciting those very people to rise in arms among us, and to purchase that liberty of which he has deprived them, by murdering the people on whom he has obtruded them: thus paying off former crimes committed against the Liberties of one people, with crimes which he urges them to commit against the lives of another.

However, the delegates to the Continental Congress were unable to bring themselves to approve such strong language. The economic interests inherent in slavery too far outweighed the ideals of freedom and liberty. Jefferson’s anti-slavery language was watered down to simply state, “He has excited domestic insurrections amongst us.”

On December 31, 1776, Washington wrote a report to Congress in which he noted that “free Negroes who have served in the Army, are very much dissatisfied at being discarded.” To prevent them from serving the British, he allowed them to re-enlist. Faced with mounting manpower shortages, Washington would ultimately reverse his general order. Slaves and free black men were to go on to serve with distinction in the Continental Army for the duration of the war.

At the end of the war, a French officer watching a review of the Continental Army in New York noted that as much as a quarter of the Army was black. Modern estimates show that a more accurate estimate was between 10 and 15%.

After the war, their service was forgotten. Some black veterans of the revolution would return to slavery in the South, while others would go on to lead lives as free men in the North. Congress would go on to pass a law forbidding Blacks from serving in the military. It would not be until the Korean War that such an integrated Army would exist in the United States.

Had Jefferson’s anti-slavery passage been included in the declaration in its entirety, it is likely that slavery as an institution would have ended in the United States at the time of the Revolutionary War. Although Jefferson’s record on slavery was both contradictory and controversial, he continued to fight against the institution of slavery for the remainder of his life.

Ultimately, following the Revolutionary War, slavery as an institution would become more entrenched in the economy of United States, and its fate would only be decided generations later by the American Civil War. Had Jefferson’s damning indictment of the institution of slavery been included in the original text of the declaration, and slavery been abolished outright, it is possible that the American history that we know — the Civil War, Lincoln’s Emancipation Proclamation, Reconstruction, and the civil rights movement — might have never happened.

Adam Tiffen is a co-founder of Tri-Star Collaborative, a firm specializing in sustainable development in emerging markets and post-conflict environments. He is a member of the Truman National Security Project’s Defense Council and a veteran of three tours of duty in Iraq and Afghanistan. He may be followed @TiffenDC.