The Gen. Roscoe Robinson Health Clinic on Fort Bragg was eerily quiet as a team of armed security personnel made … Continued

By Drew Brooks, The Fayetteville Observer May 06, 2017 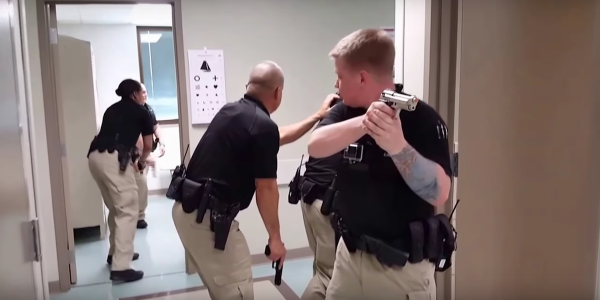 The Gen. Roscoe Robinson Health Clinic on Fort Bragg was eerily quiet as a team of armed security personnel made its way through the clinic’s halls.

Checking each room it came upon, the team of five cautiously made its way from door to door, the members softly talking to one another over the faint sounds of soldiers shouting for help in the building’s lobby.

A single gunshot broke the quiet, spurring the team ahead quicker than before. As one of the officers — carrying a ballistic shield — turned a corner, a cacophony of gunfire echoed across the clinic.

This was only a drill. But officials at Womack Army Medical Center said the scenario — in which a shooter wreaks havoc across a Fort Bragg clinic — is not too far-fetched.

And thanks to the exercise held Thursday, the hospital and its staff will be better prepared, said David Dixon, training coordinator at Womack Army Medical Center.

The mass casualty exercise is one of several conducted each year by hospital officials on Fort Bragg. Each time, the scenario changes. The hospital could practice a response to a plane crash, chemical attack and any number of other emergencies that could create a lot of injuries fast.

Dixon said the active shooter scenario mimics what has been seen elsewhere in the country, including at other Army installations.

“These kinds of things don’t happen on Fort Bragg, but we need to be prepared,” he said. “It’s all about trying to prepare.”

For the training, officials closed the Robinson Health Clinic for the afternoon. The clinic primarily serves soldiers from the 82nd Airborne Division and their families.

Thursday’s exercise began when a role player entered the clinic carrying an Uzi. The mock trail of chaos inside was already set.

Soldiers played the part of the dead and wounded, representing 68 casualties — including 15 “killed.”

Inside the clinic, officials watched to see how staff responded. In a perfect world, the staff would try to flee or barricade themselves in offices.

Once the clinic was clear of any danger, it would then be up to staff and specially trained medics — who arrived at the scene wearing body armor — to triage patients.

At Womack Army Medical Center, officials would have been alerted to the attack and spun up their own response, preparing emergency rooms for the influx of wounded.

The scenarios are designed to stress the health care system, officials said, forcing staff to work under plenty of pressure.

“There’s a lot that goes on,” Dixon said of the response across Fort Bragg. “The wheels start spinning.”