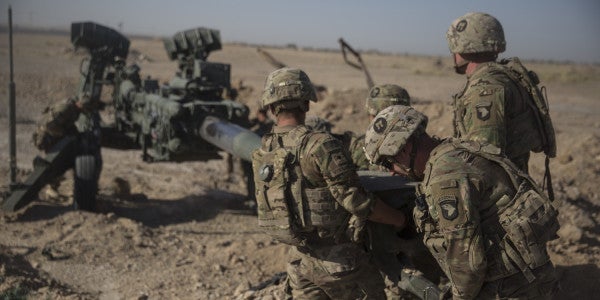 It contains sand from Salerno, Italy, and the decades-old battleground where the famed paratroopers of the 504th Parachute Infantry Regiment, 82nd Airborne Division, fought, bled and died against a Nazi enemy in World War II.

At Salerno, the regiment was weeks from earning its nicknamed “Devils in Baggy Pants” – a phrase first found in the diary of a German soldier. The regiment’s leaders refused to withdraw in the face of heavy casualties as the unit earned its reputation as fierce fighters unwillingly to cede ground to the enemy.

“It represents our past,” said Kuhlman, who commands the 2nd Battalion, 504th Parachute Infantry Regiment. “It’s a reminder that sometimes the nation is going to ask the 82nd to do near impossible things.”

Kuhlman spoke to The Fayetteville Observer from Afghanistan on Monday, hours before President Trump made a primetime, national address on the U.S. military’s longest running war.

Kuhlman spoke of the battalion’s ongoing missions in Helmand and Kandahar provinces, the recent deaths of two paratroopers and the continued resolve of his troops in what many have dubbed “The Forever War.”

“Even when things get hard and even when people get hurt – you just reach deep,” Kuhlman said. “There’s a mission here. There’s an enemy here. And we’re going to win… You mourn – you comfort those who lost friends and loved ones – and then you get out of bed the next day.”

In his address, Trump renewed the nation’s commitment to the war, reversing past calls for a speedy exit from the Afghanistan. Instead he committed to an unspecified number of troops to bolster U.S. forces and a war without a timetable for withdrawal.

“…Nearly 16 years after September 11th attacks, after the extraordinary sacrifice of blood and treasure, the American people are weary of war without victory. Nowhere is this more evident than with the war in Afghanistan, the longest war in American history,” Trump said. “I share the American people’s frustration. I also share their frustration over a foreign policy that has spent too much time, energy, money, and most importantly lives, trying to rebuild countries in our own image, instead of pursuing our security interests above all other considerations.”

Bucking against his own instincts to pull out of Afghanistan, Trump said the nation must instead seek “an honorable and enduring outcome worthy of the tremendous sacrifices that have been made, especially the sacrifices of lives.”

“The men and women who serve our nation in combat deserve a plan for victory,” the president said. “They deserve the tools they need, and the trust they have earned, to fight and to win.”

As part of his new strategy in the country, Trump called on neighboring nations – especially Pakistan – to step up in aid of the war effort. He said the new strategy would be based on conditions – “not arbitrary timetables” – to guide future plans.

On Tuesday, senior military officials said the plan would involve sending up to 3,900 U.S. forces to Afghanistan to supplement the roughly 8,400 American troops already in the country.

That number already includes an estimated 1,500 paratroopers from the 1st Brigade Combat Team, 82nd Airborne Division – including Kuhlman’s battalion. The new forces also could include Fort Bragg troops, although officials have not announced specifics on the deployments.

Before the 1st Brigade deployed to Afghanistan earlier this year, leaders said those among the brigade’s roughly 4,000 paratroopers not set to deploy would stand ready in case they were needed.

On Tuesday, Gen. Joseph Votel – the top U.S. commander for the Middle East – said the first deployments of new U.S. forces to Afghanistan could arrive in days or a few weeks.

If some of the troops do come from Fort Bragg, they will join counterparts already hard at work in the country.

Most of 2nd Battalion, 504th Parachute Infantry Regiment are based in Helmand province, where they have worked with Afghan forces and U.S. Marines since early July. The battalion also has a company deployed to Kosovo as part of a peacekeeping force there, and also has a company in Kandahar, where the soldiers are co-located with the 1st Brigade headquarters.

The 1st Brigade – led by Col. Tobin Magsig and Command Sgt. Maj. Robert Cobb – has soldiers spread across Afghanistan in a variety of missions. But the headquarters is focused on training and advising their Afghan counterparts in one of Afghanistan’s largest cities and the historic homeland of the Taliban.

The soldiers with 2nd Battalion in Kandahar are providing security to key leaders and training partners as part of that mission, Kuhlman said. And in Helmand, the battalion is focused on defending U.S. troops and fighting local insurgent groups.

Paratroopers regularly patrol the area around their base. And they serve as a quick reaction force if needed to respond to attacks in the local area or against other U.S. or allied forces.

Kuhlman said the paratroopers trained hard at Fort Bragg and other locations prior to the deployment. In that time, they paid special attention to skills aimed at making the battalion more lethal.

That includes being able to control close air support from fixed wing weapons, calling in support from armed helicopters and working with armed unmanned aerial vehicles.

He said the paratroopers have taken the fight to an elusive enemy that largely attacks via roadside bombs and other indirect weapons. At the same time, they’ve run the day-to-day operations on a base that also houses special operations forces.

Kuhlman said the soldiers are running the equivalent of a small city while also protecting that city and planning for missions with Afghan forces.

He said paratroopers have been providing support to Afghan forces — such as radar for countering indirect fire, unmanned aerial systems and medics.

“We want to be a part of operations,” he said. “The Afghans have the lead. But we are very much a part of it all.”

But being part of the fight means also sharing in sacrifices.

On Aug. 2, the battalion lost two paratroopers from it’s A Company after their convoy was attacked near Kandahar.

“It was a tragic incident,” Kuhlman said. “Those events profoundly impact the organization.”

Kuhlman said the losses hit the unit hard, but there was little time to dwell on them.

He attended a ramp side ceremony for the soldiers and a memorial service in Kandahar days later.

“You honor the dead – you tell stories,” Kuhlman said. “You have to get closure because the mission must continue.”

“This profession sometimes requires sacrifices,” he said. “That doesn’t make it easy.”

Kuhlman said his paratroopers are doing what their nation has asked of them, just as their forefathers did in World War II.

Kuhlman collected sand from Salerno before he took command of his battalion earlier this year. He presented vials to leaders within the unit. And Kuhlman said many have brought those mementos to Afghanistan.

“It’s a source of strength,” he said. “We’re all a part of something special.”

“We know the history of this unit,” the lieutenant colonel added. “Our paratroopers have a great amount of pride.”

He said Salerno showed the battalion would fight in spite of hardship and sacrifice, traits that remain today in Afghanistan.

“We’re committed to what we’re doing here,” Kuhlman said. “We’re ready to do whatever our nation needs us to do.”

Information from the Associated Press was used in this report.