Fort Hood Will Allow Anyone To Live In Base Housing 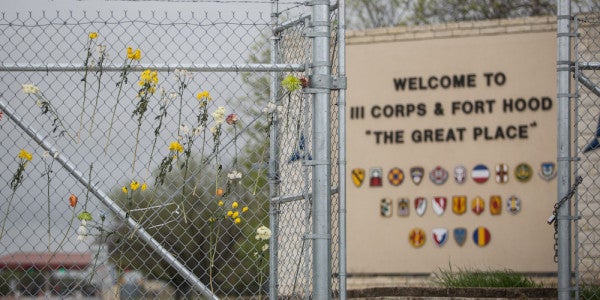 Rents start at $995 a month. The schools are good. And the neighborhood is safe — after all, it’s on one of the largest U.S. military installations in the world.

In the mornings, residents driving along Tank Destroyer Boulevard or Hell on Wheels Avenue will see “TROOP CROSSING” signs and might come across columns of jogging soldiers. In the evenings, they’ll be serenaded by taps playing from loudspeakers, and the occasional explosion in the distance.

Dealing with a low occupancy rate as the Army shrinks after the peak of wars in Afghanistan and Iraq, Fort Hood has, for the first time, opened rental units on the post to people unaffiliated with the military.

The shift, triggered by a provision in the Army’s contract with a private company that runs the post’s family housing program, has caused concern among some soldiers about whether the presence of outsiders will introduce a new security risk at Fort Hood, where two high-profile shootings took place in the past decade.

“We would prefer to have strictly military families living in our villages,” Dosa said. “But I don’t think it’s a major impact … that we now have some civilians. The numbers are pretty small.”

Just like their soldier-neighbors in the family housing areas, the newcomers are allowed to keep guns in their homes, Fort Hood spokesman Chris Haug said. (Single soldiers living in the barracks cannot keep guns at home.)

Haug said the gun policy isn’t a security risk because there are rigorous safeguards for the new residents, who must go through two layers of background checks — one by the housing company and another by the Fort Hood Directorate of Emergency Services — and register any firearms they bring on post with Fort Hood authorities.

“They’ve had two background checks for everyone in their family over the age of 18. That’s more than your neighbor has,” Haug said.

Thirty-four other U.S. military installations have already brought in nonmilitary residents, and there have been no major security issues, said Mack Quinney, project director for the housing company.

Two families who are currently unaffiliated with the military have already moved in at Fort Hood, Quinney said. Many more have applied and been rejected, mainly for financial reasons, he said.

Among the new tenants is a former service member who is a reservist, Dosa said. He expects that most civilians who are interested in living on the post will have some kind of indirect military connection.

In 2001, Fort Hood became the first U.S. military installation to hand over housing to a private operator, in a deal with the Australia-based Lendlease Group to form the Fort Hood Family Housing company.

The deal facilitated the building of hundreds of new homes on Fort Hood, where soldiers have complained about the quality of the housing stock, by allowing them to be financed with private construction bonds, Fort Hood and Lendlease officials said.

About 5,500 military families live in the family quarters that vary in size from two-bedroom townhouses to five-bedroom single-family houses. (Separately, an additional 14,000 single soldiers live in the post’s barracks, which are still operated by Fort Hood.)

The contract allows the company to rent to nonmilitary residents once the occupancy rate falls below 96 percent. As U.S. military involvement in the Middle East has wound down, the total active-duty force at Fort Hood, which includes deployed soldiers based at the post, has fallen from 50,000 in 2011 to about 40,000, Dosa said. The current occupancy rate is now 88 percent, Quinney said.

In the meantime, new housing in nearby communities is luring soldiers off post. Only about 50 senior officers are required to live on Fort Hood.

The newer houses constructed by Lendlease are popular with the soldiers, and there is a waiting list for them. Consequently, the units that will be available to nonmilitary residents will be the older ones passed over by the soldiers and their families.

On a recent weekday afternoon, Shane Rohr, who spent nine years in the Army and has lived on Fort Hood, sat in Amazing Vapor across Fort Hood Street from the post and puffed on a vaporizer. The idea of nonmilitary residents moving into Fort Hood didn’t sit well with him.

“There’s a lot of places on Fort Hood that people shouldn’t be going to,” said Rohr, 28, who served in Iraq, Afghanistan and South Korea before retiring as a sergeant.

Rohr said the nonmilitary residents shouldn’t be allowed to keep guns in their homes and should instead have to store them with the post, as the single soldiers in the barracks do.

He added that it is a bad idea to throw civilians into the military culture. “Part of being on post is if you have a complaint about your neighbor, you can bring it through the chain of command,” Rohr said. “They have no incentive to live by the standards of the military.”

Patrick Bransten, an Air Force staff sergeant stationed at Fort Hood, echoed Rohr’s concerns about on-post culture and safety but said he thought the change was a good idea overall.

“I’m sure they’re doing it because of money,” said Bransten, 28, a meteorologist who served in Afghanistan and has lived at other installations but not on Fort Hood.

When Bransten arrived at Fort Hood 4 1/2 years ago, he said he found the on-post living options to be “subpar” and decided to live in Killeen.