What Air Force Combat Controllers Go Through To Earn Their Titles

You’re sitting on the roof of a dilapidated building in the middle of Baghdad, Iraq, with three other men who... 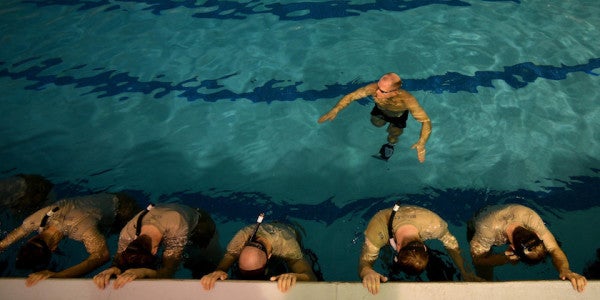 You’re sitting on the roof of a dilapidated building in the middle of Baghdad, Iraq, with three other men who are armed to the teeth. Saddam Hussein is still in power, and your mission is to guide the bombs meant to kill him into their final destination. As you tinker with the technologically advanced infrared laser that sits upon a small tripod, you listen to the distant traffic familiar to anyone who has ever lived in a city. They have no idea, you think to yourself.

Your team prepares for the night’s activities, which will later come to be known as “shock and awe.” Save for the occasional spit of chewing tobacco into a plastic bottle, your team is silent. The reality begins to sink in that you are one of only a handful of Americans in all of Iraq, which will soon be in the midst of an invasion from the most powerful military coalition since World War II. Sound crazy? It’s just another day at the office for a U.S. Air Force combat controller.

Related: This Combat Controller Has Become One of the Most Decorated Airmen Ever »

According to the U.S. Air Force’s 24th Special Operations Wing, the mission of a combat controller is to, “deploy, undetected, into combat and hostile environments to establish assault zones or airfields, while simultaneously conducting air traffic control, fire support, command and control, direct action, counter-terrorism, foreign internal defense, humanitarian assistance and special reconnaissance in the joint arena.” With such a broad mission, combat controllers must become certified and maintain proficiency in everything from FAA-certified traffic control, qualified combat diving, and free fall parachuting to certification as a joint terminal attack controller.

Finding an individual who is up to the rigorous academic and physical standards of the job is no easy task though. With graduation rates that would make most SEAL’s uncomfortable, candidates need to show up in the best shape of their life for the two-week selection course at Lackland Air Force Base in Texas. On day one, they must pass the Physical Ability and Stamina Test, which consists of:

Passing the PAST will get them in the door, but that won’t be enough to stay. Over the course of the next two weeks, candidates endure a near non-stop pace of physical exercises while learning the history of controllers and basic fundamentals of the job.

Combat controllers are primarily attached to other special operations units, so selection must inherently gauge the personality of the candidates as well. Finding a personality that can blend with so many unit cultures and be proficient in so many different capabilities is a tall order to fill.

“One of the ideals we embrace is the SOF truth that we invest in ideas, people, and equipment — in that order,” a combat controller, who asked to remain unnamed, told Task & Purpose. He has spent his career serving in special tactics squadrons.

He went on to say, “Because we have to embed with so many different SOF units, you not only have to keep up, but be better since you're the outsider. Everywhere we go we have to prove ourselves over again. Each unit culture is different, so personality is a big thing for us during selection. You might be doing raids with Rangers one week to being underway with SEALs the next, and we need airmen who can get along with all of them when they show up.”

After passing the two-week selection course, of which approximately 75% will drop out of on average, it’s off to become a certified air traffic controller. This is where cadre will find anyone who slipped through during the initial selection course with hours upon hours of intense physical punishment every day on top of the academically demanding classes. By the end of air traffic control school, candidates — referred to as cones — are in peak physical shape and ready to take on the rigors of the third phase: Combat Control School.

Airmen from the 23rd Special Tactics Squadron jump out the back of a MH-47 Chinook Helicopter April 9, 2013, at Wynnehaven Beach, Fla. The helicopter conducts overt and covert infiltration, exfiltration, air assault, resupply and sling-load operations in a wide range of environmental conditions.U.S. Air Force photo by Airman 1st Class Christopher Callaway.

Attrition is not typically the goal at this point, as anyone who made it through the last phase has shown that they are not a quitter and up to the physical challenges of being a controller. That doesn’t make this phase any easier, though, and it doesn’t mean that a few more might not be lost to injury. During the second week, they will conduct what is called the Introduction to Field Training. That’s basically a nice way of saying Hell Week. Over the course of the five and a half day exercise, cones only get about 1.5 hours of sleep. The training is so demanding that it is commonplace for cones to be taken to the hospital for rhabdomyolysis, which can lead to kidney failure or even death. The end of this phase concludes with a 15-mile ruck march out of the field where candidates will receive their distinctive scarlet beret, and officially earn the title of combat controller.

That is only the midpoint of their training pipeline though. Before they can be assigned to their units, cones still have another year’s worth of training that ranges from military freefall school to combat diver certification to advanced skills training. By the time the pipeline is finished, they are expected to meet the following physical fitness test standards:

At the end of this two years of training, Air Force combat controllers are among the most highly trained entry-level special operators in the world.

Although up to 95% won’t graduate, the proof is definitely in the pudding when it comes to how effective their selection and training pipeline is. Combat controllers are credited with the first free fall jump in the Global War on Terror, which led to them guiding the helicopters carrying the first Special Forces ODAs into Afghanistan in 2001. They are credited with guiding the bombs in during the opening salvo of the Iraq War in 2003. In 2010, they were on the ground in Haiti within 24 hours of the devastating earthquake to guide rescue and humanitarian aircraft into the country. In total, the service has awarded seven Air Force Crosses since 2001 for extraordinary heroism in combat; combat controllers have received five of them.

They have always been, and will continue to be, “First there.”