Homelessness Helped Me Find My True Purpose In Life

When I exited the United States Army almost 10 years ago, my mother was ravaged by terminal cancer. She passed … Continued 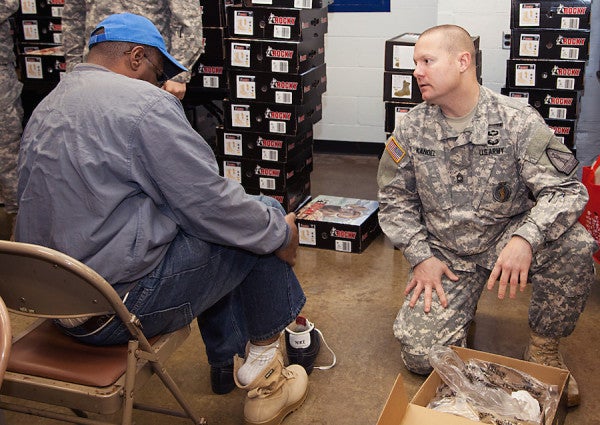 When I exited the United States Army almost 10 years ago, my mother was ravaged by terminal cancer. She passed six months after my discharge. I could not seem to hold a regular job. I had three younger teenage siblings, the youngest being 13. As much as I wanted to, I could not take care of my immediate family’s needs. When we could no longer afford the duplex, my siblings stayed at a family friend’s house. I stayed for a while, but my issues forced the family to ask me to leave.

I stayed in a shelter for three days. The feeling in a person’s gut when he walks into a shelter to receive services isn’t one of joy, but rather disappointment. “How did I let it get like this?” was a question I would ask myself, over and over again. I was never one of those guys who sat on the street, or stood on a corner, holding a sign. I did have pride, albeit false pride, but pride nonetheless. Sometimes I would ride the bus. I would put a tie on and appear as if I had it all together, with some place important to go. In reality, I had nowhere else to go.

One of those rebels without a clue, the kind most American kids used to run with prior to joining the Army, came to me and offered to let me sleep on a couch in his family’s basement. He said his dad appreciated my service and wanted to help. The friend’s family helped me find a job. I worked as a shop hand in his dad’s garage, until I found full-time employment. His mother helped me set up a savings account, and showed me how to go over apartment leases. Within eight months, I was housed again, in an apartment complex, near my employer’s office. Everything was working itself out.

If we merely spend our time attempting to manage well, we only place bandages over our symptoms. Pride says there is nothing the matter at all; fear says if we take a look, this may kill us. But, eventually if we don’t find someone to help us with the ghosts of our past, these things will kill us. I treated every night like the first night back home from the desert. I drank too much. I was quick to argue. I couldn’t hold a concrete personal relationship. I am not going to say I lost the apartment because I know where it is. The owners of the property simply said I could not live there anymore. Back to couch crashing.

Then I met the woman I would marry. I held her hostage with my crap for the first three years of our marriage. About the time Facebook and Myspace were kicking off, I located a buddy I was deployed with. He showed up at the house one day. I thought we were going out for drinks, but we ended up at the local VA. I told him I wanted no part of what they were throwing down. If they knew what was going on in my head they weren’t going to let me out. He said, “That’s fine. They can’t keep you there forever.” I asked him why he had not going in there. He told me, “I do. Once a week. Now, I am going to walk you in here, introduce you to some people, and you’re going to tell them the goddamn truth, roger?”

They put me on some medication, and that was the only treatment I followed. I didn’t show up for group, or any appointments, unless it was to refill the meds. Two years later, my wife left me for her own sanity and safety, the house was foreclosing, and I lost my 30th some-odd job in seven years. Homeless for the third time.

This time, the VA sent me to across the state of Nebraska to Grand Island, and I found a community that invests in me. My providers spoke to me, as if they may see me in the community. I started some intense therapies. Nothing worthwhile comes easily, nor quickly. I was given a job on the hospice ward of the VA. My friends were 87 and 91 years old, and crusty as they come. They taught me lessons I couldn’t have paid for. They put things into perspective. An old Marine, my age, who had been to Iraq, ran the VA program I was involved in. He went through what I went through. After a year, I got a job providing 911 emergency services at the city level.

I stayed in Grand Island. My wife came back. We had our first kid 15 weeks ago. Some days I have to sacrifice who I think I am for who she wants me to be. Today, I work as a support specialist for an all-veteran program in rural Nebraska. Life is different today. I used to sit in shelters or stand downs, and wonder how a guy who should be driving a BMW and working a C-level job got there. Today I get to be the man I always wanted to be.

We do not look like the man in camouflage on the corner. Most of the homeless veterans I come in contact with are showered, and appear as if they have their act together. We are less likely to beg, barter, and panhandle. We adapt, improvise, and overcome. We were taught to appear as if we were never here, so why would we leave an imprint we cannot wash away? In the job I do today, I am very blessed. I get to do what I love for money. I come into contact with veterans who are in the exact same place in life I used to be. I do what someone did for me. I jump in their foxhole and show them the way out.