I was sitting in another round of the Army’s annual mandatory training classes, listening to a PowerPoint presentation and pretending … Continued 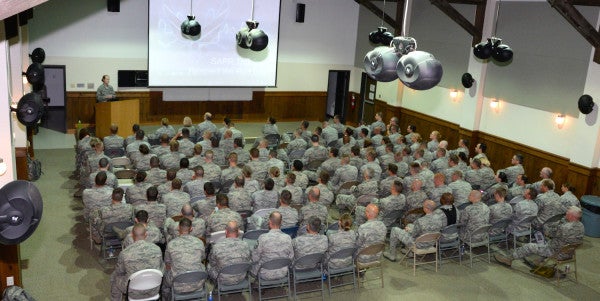 I was sitting in another round of the Army’s annual mandatory training classes, listening to a PowerPoint presentation and pretending to pay attention when I wondered just what were we gaining or losing from all of the classroom training. Army mandatory training is a list of classroom training requirements that every soldier must attend annually or more frequently. The classes include workplace policies and are equivalent to human resources training in the private sector, including:

For the Reserve component, all of the “mandatory training” equates to at least 25% of the total annual training time allocation (based on the standard 39-day annual calendar,which the commanding general of First Army deemed inadequate). After allocating time for 39 “Warrior Tasks” (individual combat skills that soldiers train on annually) and 12 “Battle Drills” (Warrior Tasks for units), that leaves only about 160 hours for training each year — less than half of the training calendar — to actually train on individual jobs and the unit’s mission.

This represents a huge investment of time and resources into what amounts to human resources training. I wondered about theopportunity cost of nearly two weeks devoted annually to this often-redundant and generally painful barrage of PowerPoint classes, especially when Army’s Chief of Staff Gen. Mark A. Milley says that the National Guard needs at least two more weeks of annual training to be adequately trained for its missions. Does the value we gain from these classes outweigh the opportunities lost by sticking every soldier in a seat for two weeks when they could be shooting, working, or training on their individual occupational skills?

Looking at the suicide-related classes, the data seems to indicate that the mandatory training isn’t very effective. From 2004 to 2011, the military suicide rate climbed even though a 2015 report found no link between combat deployments and suicide. Training could not stymie suicide.

Even with the incredible command emphasis on fighting military sexual assault, the mandatory classroom training has not stemmed the rates. Since theestablishment of the sexual assault response program in 2004, therate of sexual assault reporting has increased nearly every year. Understanding that some of the increased reporting is undoubtedly from better reporting procedures and decreased stigma associated with reporting such a crime, how can the Army’s program appear so helpless at slowing the problem?

The failure of the Army’s mandatory classes to adequately resolve these issues isn’t necessarily an indictment of PowerPoint, or a reflection of the often-unprepared instructors, or even suggestive of inadequate content. Instead, the Army is attempting to resolve systemic problems with an hour-long presentation instead of addressing root causes.

Davis Balestracci, a statistician and writer of “Data Sanity: A Quantum Leap for Unprecedented Results,” said, “…your current processes are perfectly designed to get the results you’re getting.” The Army itself is a massively complex system, so we need to fix processes along with, or instead of, applying mandatory classroom training as a solution.

The military’s substance abuse program has been incredibly successful at decreasing drug use among soldiers. The program changed processes instead of simply adding classroom time. In 1973, nearly30% of service members used illegal drugs based on random urinalysis; however, drug use did not decline significantly untilpunitive actions were tied to drug testing in 1981. The graph below shows the rapid decrease in drug use. It was not enough that drug use was against regulation; processes had to change to discourage its use.

Chart taken from a February 2010 newsletter of the Office of National Drug Control Policy.

This rule can hold true for other challenges that the Army faces. After years of failing to get soldiers to properly handle thumb drives, themilitary banned removable media in 2008, solving the problem instantly with a procedural safeguard. The military is moving toward improved HIPAA and the handling of personally identifiable information with a combined effort of individual online training and electronic measures, such as encryption, limiting access to scanners, andtransitioning away from using social security numbers. These improvements force soldiers to be more mindful and serve as a constant reminder of the Army’s policies.

The Army’s antiterrorism program is successful for relying on a simple theme that all soldiers can remember: “See Something, Say Something.” After all of the terrorism vignettes, definitions, and applicable regulations, the average soldier can remember the phrase that the Army createdmultiple methods of reporting for ease of use. In a sense, the antiterrorism campaign was able to change soldier's’ perception of themselves, empowering them to report suspicious incidents.

This combination of simple themes, procedural changes, and classroom training is key to changing service members’ values and fundamentally changing the military culture to such an extent that it renders particular mandatory training requirements obsolete. Soldiers do not need to be reminded that illegal drug use is illegal; the random drug urinalysis tests have established a culture of no-tolerance towards drug users. Although bigots undoubtedly hide among the military’s ranks, the military’s current culture — a product of concerted efforts since President Truman desegregated the military in 1948 — does not tolerate open discrimination to such an extent that the equal opportunity annual training’s greatest value is identifying points of contact to report issues. Although I have seen far too many EO incidents of (mostly) tasteless humor or thoughtless bigotry, every offender met swift reprimand.

As Balestracci said: “Quite simply, culture is created by what is tolerated.” The Army’s culture is a collective understanding and set of values that is internalized by every new recruit. This culture serves as aherd immunity against unethical behavior. You’ll never see a squad of soldiers sparking up a bong or a group of noncommissioned officers discriminating against subordinates based on their race. The Army’s culture prohibits it.

Now take the Army’s current biggest embarrassment: sexual assault and sexual harassment. Regardless of the annual classroom training time, policy memorandums, and posters, what is the Army’s culture about sexual misconduct?

High-profile examples from the past year illustrate cases of soldiers conspiring to commit sexual misconduct, including a sergeant from Fort Hood who pimped soldiers and a National Guard detachment which was investigated for sex with “young” prostitutes overseas.

In defense of the Army, with over a million soldiers within its ranks (both active and reserve), we can statistically expect thousands of bigots, drug users, and predators; however, in a 2014 report, RAND Corp. found that 22% of women and 7% of men in the military were sexually harassed within the previous year. Almost 5% of women in the military were sexually assaulted in that past year. This level of harassment and assault (while unable to accurately compare to private-sector businesses) indicates a systemic problem; something that classroom training alone cannot fix. Unlike drug users and racists, there is no herd immunity to sexual misconduct in the Army today. This scandal requires transformative processes in the scope of the Army’s equal opportunity and substance abuse programs.

Looking at examples from the private sector, I doubt it. Peter Cohan’s book, “You Can’t Order Change: Lessons from Jim McNerney’s Turnaround At Boeing,” describes how the Boeing’s chief executive officer repaired the damage caused by a series of “ethical lowlights,” which included 15 vice presidents being fired on ethical grounds, misuse of proprietary documents, violating U.S. export laws (resulting in imprisonment of two executives), and senior leaders “looking the other way.” These problems echo not only the challenges that the Army faces but that of any large organization. McNerney dealt with Boeing’s ethical challenges by changing the company’s culture and actively seeking out future ethical problems instead of waiting for them to surface.

All the evidence indicates that relying on annual classroom training isn’t effective in changing organizational culture, especially in the immediate timeframe that problems like suicide and sexual assault desperately need. Leaders can take several time and resource-efficient steps to successfully change Army culture, developing a herd immunity towards specific behaviors. Changing the culture starts outside the classroom:

Hopefully, this is not an indictment of classroom training as a whole but a challenge to leaders to evaluate cause and effect, then act to change policies and procedures; change the system to change results. PowerPoints are ineffective Band-Aids for systematic organizational problems. Lasting organizational transformations, which would make such mandatory briefings obsolete, does not happen in the classroom. It requiresleadership capital, but has the potential to reduce the opportunity cost of the Army’s mandatory training programs with the goal of eventually minimizing the time spent in classrooms. The National Guard already has the two weeks of additional training that the Army Chief of Staff desires, except it is spent in classrooms with dubious value.