The military-Hollywood marriage has generated some of the best entertainment since the dawn of motion pictures, and has inspired many... 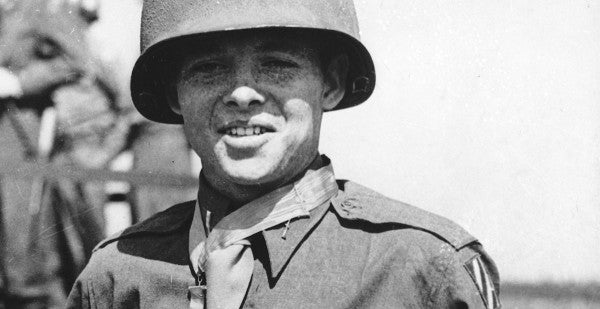 The military-Hollywood marriage has generated some of the best entertainment since the dawn of motion pictures, and has inspired many to dig deeper into the stories of the real human drama they depict. If you’re a film buff like me, a lot of movies come to mind that epitomize this relationship — “Fury,” “Letters From Iwo Jima,” “Flags of our Fathers,” and incredible miniseries such as “Band of Brothers” and “The Pacific,” to name a few. Other people may think of “Saving Private Ryan,” one of the best war films of all time, or Ken Burns’ “Civil War” and “The War” documentaries. There are also productions that are entertaining, although not terribly accurate historically, such as “Lone Survivor” and “American Sniper.” In these projects, characters — often based on real-life service members — are portrayed by actors.

In World War II, it was very different. During and immediately following the conflict, Hollywood was much more proactive in recruiting military service members for movie roles. Characters were played by actors, but quite often, those actors had real-world combat experience.

Many served prior to becoming famous — Lee Marvin was in the Marine Corps on Saipan,wounded by machine gun fire that severed his sciatic nerve. His sometimes co-star Charles Bronson also served in the U.S. Army Air Forces as anaerial gunner, earning a Purple Heart for injuries he received in combat. Without a doubt though, the most famous Hollywood-military hybrid is Medal of Honor recipient Audie Murphy.

Murphy had modest roots in Texas, and early in his life, his sharecropper father left the family after years of coming in and out of his life. Audie dropped out of school in the fifth grade and began working in the cotton fields for a dollar per day to bring home money for his mother. He also learned to hunt and shoot a rifle to put food on the table. When he was a teenager, his mother died tragically of pneumonia and not long after, the Japanese attacked Pearl Harbor. Feeling compelled to serve in uniform, Murphy received help from his older sister to falsify his age on enlistment papers. He volunteered for the Marine Corps and the Navy, but was turned down for being underweight. Eventually, in June 1942, the Army accepted him and he was sent to Morocco and Algeria to train for the invasion of Sicily.

U. S. Army publicity photo taken after Murphy's 1948 trip to Paris to receive the Chevalier légion d'honneur and Croix de guerre with palm.

After landing on the island, Murphy participated in several scouting patrols and saw action on multiple occasions, distinguishing himself as an expert rifleman. After the landings at Salerno on the mainland of Italy, his patrol was ambushed, leaving him and one other soldier as the sole survivors. Rather than retreat, Murphy took the offense and killed five Nazi soldiers with machine guns and hand grenades. On another patrol soon after, Murphy’s unit was ambushed a second time by seven enemy soldiers. The group ended up killing three and taking the rest prisoner.

During the landings at Anzio, Italy, Murphy’s unit killed a German tank crew. Not good enough for Murphy, he completely disabled the tank with rifle grenades and ended up earning a Bronze Star with “V” device. Despite falling ill with malaria twice, he returned to action quickly and earned a second Bronze Star just prior to liberating Rome.

In northern Europe, Murphy really made a name for himself, and all of his exploits are too lengthy to list. Some of the highlights are actions near Ramatuelle, France, where a group of German soldiers appeared to surrender, only to kill his best friend. Murphy advanced under direct machine gun fire on the structure they occupied and wounded two of them, killed six, and took 11 prisoner. Soon after, he earned a Silver Star for taking out an enemy machine gun position, killing four Germans and wounding three near the L’Omet quarry. In the same place three days later, he advanced alone and under heavy fire on a hill with a radio, directed his men for an hour. When his unit caught up to him, they found Murphy alone, surrounded by 15 dead Germans and 35 wounded. His actions earned him a battlefield commission.

Murphy’s most famous action was the one that earned him the Medal of Honor at the age of 19 in January 1945. During a routine advance near Holtzwihr, France, Murphy and his men were moving forward aboard an M-10 tank destroyer that took a direct hit from enemy fire, disabling it. He ordered his men to withdraw to a patch of nearby woods as he stayed in place with a field telephone to direct artillery fire. All the while, enemy forces continued to pour heavy fire on his position. His Medal of Honor citation details the heavy enemy casualties inflicted by American artillery. Nevertheless, German forces continued their attack, advancing on Murphy from three sides. Ignoring the grave danger, he climbed atop his burning M-10 — in danger of exploding at any moment — and began firing at the enemy with the vehicle’s .50-caliber machine gun, killing dozens of Germans and thwarting the attack.

Murphy held his position, and later killed an entire German squad attempting to flank his position at a distance as close as 10 yards away. According to reports, when asked how close the Germans were to his position, he said, “Just hold the phone and I’ll let you talk to one of the bastards!”

Murphy received a minor leg wound and retreated to his unit’s location only when his ammunition was exhausted. Refusing medical attention, he helped organize a counterattack, which eventually led the German forces to withdraw altogether.

In addition to the Medal of Honor, by the time Murphy separated from the Army, he received every combat award presented by the Army, including the Distinguished Service Cross, two Silver Stars, the Legion of Merit, two Bronze Stars (one with “V” device), and two Purple Hearts. He was also awarded the French Fourragere (for heroism in the Colmar Pocket), the French Legion of Honor (Grade of Chevalier), and the French and Belgian Croix-de-Guerre.

Murphy redeployed to the United States after the war and although he suffered severely from what’s now known as post-traumatic stress, he eventually became a Hollywood celebrity. It was actor James Cagney who took notice of Murphy’s war pursuits and ultimately brought him to Hollywood following the conclusion of hostilities. After extensive work with acting coaches, he got a bit part in 1948’s “Beyond Glory” and his first leading role in “Bad Boy” the following year. Many in film production were apprehensive about his lack of acting experience, but the financial backers of “Bad Boy” refused to bankroll the movie unless Allied Artists gave Murphy a starring role. Upon that film’s success, Universal Studios signed him to a $2,500-per week contract, and he appeared as Billy the Kid in “The Kid from Texas” in 1950. He later married actress Wanda Hendrix, who co-starred with him in “Sierra.”

Murphy’s most famous movie was 1955’s “To Hell and Back” based on the autobiography of the same name about his service in Europe during the war. Though reluctantly, he agreed to star as himself.

In addition to his film credits, Murphy was a poet and songwriter, penning a piece known as “The Crosses Grow on Anzio,” which was used in “To Hell and Back.” He was also staunch advocate for veterans, especially as soldiers started arriving home from the Korean War with severe post-traumatic stress. Murphy spoke out in strong support of the U.S. government’s extending greater medical benefits to veterans. In the 1960s, he also appeared in a series of television productions called The Big Picture. Produced by the Army, these programs focused on famous actors and actresses who had served in uniform. An episode entitled “Broken Bridge” documented Murphy’s visits to military installations in Europe and New Mexico to highlight new and modern weaponry being used by the services, an effort that earned him the Outstanding Civilian Service Medal.

Murphy made 44 films before his tragic death in 1971 in a Virginia plane crash. While the star status he achieved over a 21-year Hollywood career holds a notable place in American culture, it’s his military exploits that he is truly remembered for, especially among America’s veterans. Today, Audie Murphy is still considered one of the most-decorated U.S. service members of all time.

War stories, whether true or fictional, are among the most intense human dramas anywhere. While the entertainment industry has often had a love-hate relationship with the military — particularly during Vietnam and even the War on Terror — it is veterans’ war stories that have inspired some of the best American movies ever made.