Editor’s Note: A version of this article originally appeared on LinkedIn. At 4 a.m. I am on the path to … Continued 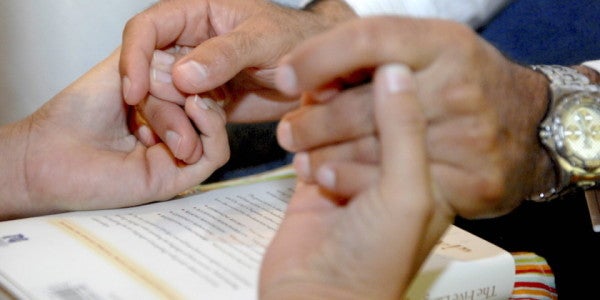 At 4 a.m. I am on the path to the local track in California. My headlamp shines through the dark, showing suspended water droplets from the valley’s fog. I pick up my pace to start my 400-meter repeats. Simon and Garfunkel’s “Sound of Silence” blares through my headphones:

The lyrics breathed the reality of my life and I began to cry. My tears flowed stronger with every 400-meter lap until my body shook from the combination of adrenalin, sadness and fear. I began to hyperventilate.

I finished my cool down in the dark, sobbing under the stars and feeling helpless. Nobody could possibly understand how scared and alone I felt or how much guilt and regret I had. At that moment, I understood my feelings toward dealing with my father’s cancer paralleled the anxiety of post-traumatic stress disorder.

I have been diagnosed with PTSD, and have learned to channel my anxious energy toward fitness, career, and helping others. Unfortunately, other people who have PTSD may struggle to readjust. And many people do not understand the mental struggle and inner turmoil PTSD causes. They do not relate to feeling helpless, unsafe, or even vulnerable around their loved ones.

PTSD feels like caring for a loved one who has cancer when it looks like it’s become too late. Just like fear, guilt, nightmares, anxiety and regret. Two-and-a-half years ago, my father was diagnosed with stage-four cancer that metastasized throughout his entire body. He was given six months to live, a prediction he surpassed by two years. We took every precaution to ensure he followed the doctors’ protocols.

Through my experience as my father’s caregiver, I was able to draw parallels between caring for someone with cancer and living with PTSD. Many people can relate to the former, not the latter.

Flashback three weeks ago, and I am on the track. My father started a new treatment at home. I monitored his symptoms daily — skin coloration, wellness regimen, and water intake. I felt confident that he was handling the new medication well for almost three weeks.

Then he began to show flu symptoms. This did not seem like an extreme scenario, so I simply made sure he was rested and hydrated. One night I left him to rest, and woke up to a phone call to find out he had fallen from weakness. He laid on the ground for four hours before the medical team arrived. Confused by the situation, he refused treatment and called me for aid. By the time I took him to the emergency room, he was in bad condition. His symptoms worsened until he was sallow and did not recognize me.

While I was at my morning track workout, my father had been transferred to the University of California, Davis Medical Center. Due to a severe reaction to the treatment, the tumors spread throughout his body and multiplied in his brain. At this point, the likelihood of my father’s survival seemed grim. I felt helpless.

I didn’t know I made a bad judgment call. Despite the doctor’s later apologies, his onerous words could never be taken away; I felt like I failed. Just like a leading service member in a traumatic event feels there was something more that could be done.

On the track, each lap brought a new thought that paralleled those I had when I returned from deployment.

My father’s reaction was my fault because I should have paid closer attention. Just like it was the fault of the MRAP driver who should have avoided the landmine.

This should not be happening to my father, but to me. I don’t deserve to be here right now because he relied on me, and I failed as a leader. Just like failing a service member.

I felt like I would never be able to talk to him again. I saved every voicemail, even the ones from the hospital when he cried because he was confused, living a nightmare. Just like saving the dog tags of a fallen soldier who you wish you could have (or known you could have) saved.

I should have called the doctors immediately, before the infection spread. Just like flashbacks to wartime situations in which you think you could have saved others in your brigade.

No one can relate to the way I feel. I have so many people who want to help, but I don’t trust they will follow through. Just like the members whose loved ones cannot empathize with the way they feel after coming home.

I continue training because it keeps me propelling forward; if I stop, my life may unravel. Few understand this as a healthy coping mechanism. Training is more than using chemicals to heal; it is having a goal.

In a previous article I wrote,“A warfighter without a goal is a dead warfighter.”

I must continue to work because the mission goes on. I do so by co-authoring a PTSD manual, “Mindtrack,” to guide warriors on their quest to readjustment through fitness.

The morning after my track workout I wrote to my co-author about the parallels I found for our book. He responded perfectly: “I encourage you to not judge those or be fearful of those returning with PTSD, but realize they are just human beings going through emotional constraint that may need your support, not sympathy.”

Still, the images in my mind repeat like a punch to the gut: his fall, the times I saw him without noticing his ailment, brief moments of eye contact in the hospital, his humming as he was loaded into the ambulance, the moment he rocked after the doctors told him he had eight more brain tumors, his incoherent mumble: “Don’t let the Air Force take my little girl.”

After weeks of perseverance, my father is now in a rehab portion of the hospital and scheduled to be released in a few days. Cancer is a marathon, not a sprint.

Meanwhile, my cortisol levels have dropped again and I am reenergized to continue helping others. My track workout experience will resonate with me for as long as I work explaining to civilians and employers what living with PTSD feels like.

PTSD feels like grief, pain, regret, fear and guilt, rolled into one. Just like it feels to care for a cancer patient against the fight. When people ask what to say to those who admit to a PTSD struggle the answer is not what to say, it is how to show support for their loved one.

If you would like support Liz’s and her family as they care for her father, please visit their You Caring fundraising page.