In recent years, Mexican drug cartels have created a startling proliferation of violence just south of the U.S. border. For... 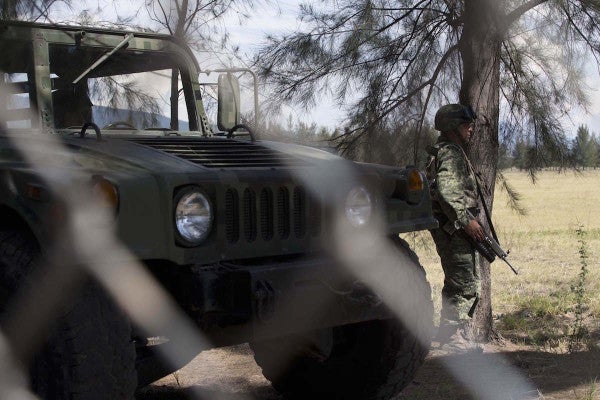 Despite strong efforts, such as establishing a 10,000-person paramilitary force to augment standing security forces, drug crime in Mexico remains high. Further, a porous southern border not only allows for an estimated six to seven million illegal entries into the U.S. annually, but also incurs the risk of terrorists entering. Military leadership on both sides of the border should no longer see crime problems in Mexico as a domestic issue, but one that imperils both countries. Engagement and partnership efforts with the Mexican military to help in their fight with the cartels are critical to bilateral security in North America.

This threat to the homeland highlights the requirement for active American engagement with our Mexican security force brothers and sisters. U.S. Northern Command, the combatant command with an area of responsibility encompassing the United States, Canada, Mexico, and the Bahamas, holds the unique position to provide such engagement. Specifically, through information operations that encourage increased military-to-military engagements with Army forces regionally aligned to the area, the combatant commander can improve the security dilemma facing both nations.

U.S. Army North, the Army component to NORTHCOM, is the operational lead for the U.S.-Mexican army partnership. This bilateral cooperation is committed to defeating transnational criminal organizations, drug cartels among them. To that end, the command coordinates significant operational and tactical-level training opportunities and military-to-military engagements throughout the year. For instance, the annual Ardent Sentry exercise tests both nations in their natural disaster response preparations. The command does a breadth of good to build on a strong Mexican partnership, but it needs to employ information operations to expand on these activities.

Information operations in North America may seem like an unlikely enabler. It can be problematic given legal ambiguities, so planners must handle it delicately and ethically. For instance, a 2011 Rolling Stone article claimed Army psychological operations soldiers attempted to manipulate members of Congress into providing additional support to Afghanistan. It explains that the 1948 Smith-Mundt Act prohibits the government’s use of manipulative, information-based tactics on Americans. Even though a subsequent inspector general investigation found no wrongdoing, the story highlighted just how damaging these types of operations can be if used on civilians.

That is not to say that info ops within the homeland is impossible. Some scholarly research finds that although not entirely prohibitive, a preponderance of federal legislation, executive directives, and military policy indicate that domestic information operations is possible. Further, the 2013 National Defense Authorization Act effectively nullified this long-held Smith-Mundt Act and seemingly allowed for it in North America. The change in law, nonetheless, does not repeal public distaste for the appearance of sly exploitation in the United States or on Mexican military partners.

Compounding the problem, the Army and Joint Staff provide little guidance on info ops’ use within North America. Joint Publication 3-13, “Information Operations,” has nothing to say on the matter. Army Field Manual 3-13, “Inform and Influence Activities,” states that the Army should only direct influencing activities toward foreign audiences. It also indicates that homeland security officials can request information-related capabilities only for employment in a Defense Support of Civil Authorities capacity. This may be employing radios and loudspeakers to inform an affected population after a natural disaster.

Certainly, any plan should go through a rigorous legal and command review prior to implementation, but a dearth of doctrinal guidance provides zero planning suggestions to a staff. Without a foundation of doctrine, a staff may opt to forgo using information capabilities at all; a loss of a powerful enabler to any operation.

The operational lead for army-to-army engagements in North America, U.S. Army North also may feel the pain from a lack of adequate info ops doctrine. Although staffed with trained officers, they may not be dedicated to information operations planning. This may be due to a requirement to use them in higher demand, branch-immaterial duties. Another reason is possibly a misunderstanding of the utility of an info ops officer in the information environment, or “…the aggregate of individuals, organizations, and systems that collect, process, disseminate, or act on information.”

Regardless, the U.S. Army North public affairs cell is the lead on all of the command’s information tasks. The inherent problem in this arrangement runs along the doctrinal split between public affairs and information operations. Public affairs is the news team of a unit charged to provide the objective details of an organization’s operations. It is not intended to create an effect in the environment, but more to report on effects the organization creates. Conversely, information operations is intended to create an effect and to adjust the nature of the information environment. Without a clear delineation between the two, neither may be used with the greatest impact. Ultimately, shaping efforts in the region suffer.

What can be done? First, through U.S. Army North, NORTHCOM should continue conducting information-specific shaping operations in a way that allows for greater military-to-military engagements and other cooperative activities. Phase Zero of the Joint Phasing Model indicates that shaping activities, done through security cooperation such as U.S.-Mexican combined training and exercises, attempt to affect “…perceptions and adversaries’ and allies’ behavior….”

Given the inimical history Mexico and the United States have shared over nearly two centuries, the Mexican secretariat of national defense is sensitive to uniformed U.S. military members operating within Mexican territory. However, information operations can shape various leaders’ perception of future U.S.-Mexican combined operations by selling the cooperative benefits. These include a stronger, more interoperable partnership, more effective counter-drug operations, and a resultant decrease in drug cartel-related crime. These are key tasks to shaping activities anywhere, but critical to those done in concert with Mexican partners who share the same threat as the United States.

Regionally aligned force engagements is a bottom-up approach to information operations delivery. Once commanders agree to, plan, and resource combined events between U.S. and Mexican units, leaders from platoon through brigade can shape attitudes through discussion and sheer presence. By demonstrating the profession of arms through a shared experience, U.S. leaders have a shaping effect in the environment. Mexican partners become more trusting and knowledgeable of the American soldier and may seek more opportunities to work together. More training opportunities for Mexican forces lead to greater skill in their own operations that lead, further, to more effective strikes against drug cartels in Mexico. A demonstrated combined resolve to deter or defeat the cartels from both sides of the border shifts the information environment, dissuades cartel attacks and activities, and leads to a more stable North America. Cartels may begin to realize that they can no longer operate with impunity.

An example of where this method can be effective with Mexican partners is the Merida Initiative. The ongoing Department of State program, instituted in 2007 with an earmarked $1.4 billion budget, intended to develop Mexican rule of law and policing capabilities to secure the border and curtail drug-running activities. A key component is to transfer firearms and other items necessary to Mexican police. However, the initiative was too focused on equipment, funding, and crime-ring targeting and not the long-term professionalization of security forces. As a result and among a number of other reasons, the program received severe criticism for its connection to the Fast and Furious gun-running incident in 2010.

Where the Merida Initiative seems to have gained some traction is in less conspicuous training and professionalizing Mexican security forces. As of 2011, Mexico has seen an increase in nearly 40,000 law enforcement and judicial officers through U.S. partnership efforts. This was focused on just civil law enforcement. Since Mexico has militarized its counter drug efforts with its standing force, as well as with the additional paramilitary force, U.S. regionally aligned forces have an inroad into this kind of security cooperation. Certainly U.S. military training on what is essentially a policing matter may need special dispensation from Congress, but this kind of security cooperation isnotnew. To reinvigorate this effort, Mexican leadership may need convincing. Focused info ops may be the key.

U.S. Army North should also implement a standing info ops cell that is distinct from its public affairs team and leverage it to lead the information-shaping efforts within the region. It already has the necessary expertise on staff. Furthermore, this new cell should be acutely in tune with the sensitive nature of the use of information operations in the homeland. If planners use it in an affirmative, transparent way, it can be helpful — and certainly legal and ethical — in the d region.

A new cell signals an acknowledgement that the North American information environment is important and malleable. It also provides a focused lead to integrate information operations into every exercise or contingency. Most importantly, a standing cell draws a distinct line between the operational requirement to influence the information environment and the Title 10 U.S. Code requirement to inform the Army and American public.

Third, the Joint and Army staff, through its respective doctrine directorates, should augment the existing information operations doctrine with guidance on the effective, legal use of information within the homeland and among North American partners. Additional doctrine encourages planning for operations, reduces time for legal review, and makes clear Army and Joint force intents and limitations when trying to shape the information environment.