I Never Saw Combat As A Marine In Afghanistan, And I’m Okay With That

The most bored I’ve ever been in my life was as a Marine in Helmand province, Afghanistan. It was 2009... 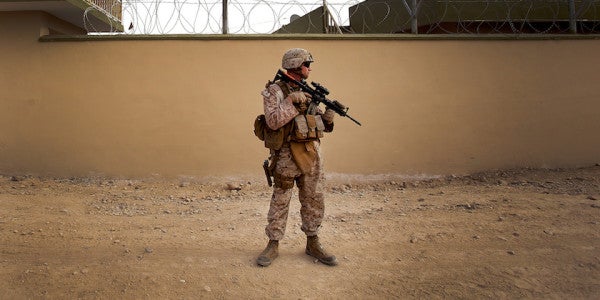 The most bored I’ve ever been in my life was as a Marine in Helmand province, Afghanistan.

It was 2009 and I was a POG assigned to a POG unit. Operating satellite communications terminals and administering computer networks was my specialty. Nerdy, I know. This meant a lot of sitting and waiting. As long as the equipment was functioning, my duty was fulfilled. When one of the satellite terminal’s green lights began to blink orange or — gulp — turned red, that meant somebody couldn’t connect to somebody else, and my work began.

At least I wasn’t alone in this boredom, for the most part. My friends were right there. We could talk for hours about nothing, an acquired skill. We had cigarette-rolling contests. We became experts in shooting the shit. Then, our shifts ended and we had free time. More of it.

When we talk about war, we tend to focus on the gritty stuff: The guts. The glory. The kill-or-be-killed moments you see in Hollywood blockbusters like “Saving Private Ryan” and “Starship Troopers.” But, in reality, for hundreds of thousands of American service members who’ve deployed to Iraq and Afghanistan over the years, my experience in Helmand will feel more relatable than what Tom Hanks endured. Only about 10% of veterans participated in direct combat in those wars. For the rest of us, monotony was the main enemy.

I arrived in Helmand just as the shit was really hitting the fan. There was a troop surge. Afghan elections were happening that year. I wanted desperately to get off the base and get a piece of the action I was promised by my drill instructors and combat trainers. Let me see Afghanistan. Let me see some shit. I didn’t join the Marine Corps, of all branches, to sit in a room staring at blinky lights and regretting my MOS.

A guard tower on Combat Outpost Dand Patan faces the Pakistan border, ensuring security for residents of the COP.

Then my opportunity arrived. Or at least I thought it did.

Related: 9 Photos Of Afghanistan In 2007 Through The Eyes OF One Marine »

It began when a higher-up at the base defense operations center told his boss that he needed some bodies from base-dwelling units to man some guard posts. Many units released several Marines, two months at a time, to go fulfill this duty. I was one of the lucky few. Finally, I would get to be a Marine Marine.

So, off I went to the BDOC. Show time: 0230. AM. In the morning. My shift ran from 0400 to 1600. I remembered the inhuman feats of John Basilone at Guadalcanal and prepped myself to be a battle legend.

I was assigned to the forward ammunition supply point located at one of the corners of Camp Leatherneck. It was a square mile surrounded by 10-foot berms and a perimeter of concertina wire. There were eight posts surrounding the FASP, but manpower was limited, so we only had five people covering three posts. Great, I thought. Now we’re gonna get overrun by Taliban.

Of the five of us manning posts at the FASP, I was the senior man as a corporal. This meant that more often than not, I was alone for my 12 hours on post while the lance corporals and private first classes teamed up.

I was excited about my duty and my Mk19 grenade launcher. This was my post. I had a weapon that fired up to 425 grenades per minute at a maximum effective range of 1,500 meters. Those Taliban guys better not fuck with me, or they’ll feel the full wrath of a trained killer with a grenade launcher and an M16A4.

But they never came.

This left me with very little to do. Prohibited activities on post included, but were not limited to: reading books/magazines/letters, listening to music, sitting down, removing protective gear, leaving post (did they really expect me not to shit for piss for 12 hours?), or anything else that may obstruct my ability to challenge and engage potential enemies near my post.

Being on the ammo supply center, there was also no smoking. An ember from a cigarette could apparently be taken by the wind, travel over a hundred meters to the nearest cache of bombs, disengage the safeties, and blow up the world. Overzealous as it was, I kind of understood the rule, but as a hardcore cigarette addict, I was bitter. So I smoked anyway.

As the days and weeks dragged by, my 12-hour shifts seemed to get longer. But something unexpected also happened: I began to enjoy it. My whole life I had relied on media and the company of others to keep me entertained. Now, this gruesomely uneventful post was teaching me how to just exist on my own. Combat wasn’t in the cards, but I found that I could stimulate my mind in other ways: By appreciating the sunrise I saw every day, or by vigilantly performing my duty of scouring the desert, or by imagining what home would feel like. And every day my ability to cope with the boredom improved.

The flies, for example. Those little bastards were rampant. They walked on my food, my face, and seemed to exist purely to bother me. Luckily, I had a flyswatter. One day, I killed 134 of them between sunrise and the end of my post at 1600. The flyswatter broke that day. So I used my glove. Adapt and overcome.

It wasn’t always just me and the flies, though. Several times a day, the sergeant of the guard would stop by my post to check up on me. I always knew it was him, but I had to formally challenge him anyway. The challenge and password were different every day. I asked him a predetermined question, and he gave me a predetermined response. He was cool enough, and brought me hot breakfast when he could. His arrival also meant I could hit the port-a-shitter, so that was nice.

Then there were the challenges I created for myself, which grew more ambitious as time trudged on. For those of you who haven’t been to a desert like the one in Helmand, moon dust is a type of sand with the consistency of powder. So I endeavored to leave the perfect boot print in the moon dust, as the stuff holds shape pretty well. The mission took me four hours, but I succeeded, damn it. I felt a true sense of accomplishment.

I’m not exaggerating. Believe it or not, of all my life experiences, I count my deployment to Afghanistan among the most rewarding. Sure, I didn’t become a battle legend. I didn’t earn a Silver Star or rise to the likes of Carlos Hathcock or Dan Daley. And I'm okay with that. Because when I look back at it now, I see a period of personal growth that could’ve only occurred there and under those circumstances. I can say that I never knew what real boredom was until I deployed to Afghanistan. But I can also say that until that deployment I never really knew who I was, either.