Once upon a time, in a faraway desert, I carried way too much weight for way too many days. I... 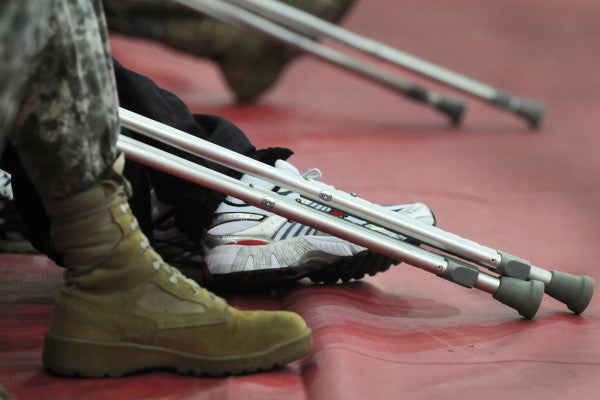 Once upon a time, in a faraway desert, I carried way too much weight for way too many days. I also got blown up, tossed about, and experienced all the joys a good combat deployment has to offer.

Upon return, I discovered things like my hands going numb and one shoulder unable to rotate. I also experienced headaches and couldn’t walk in a straight line, but on active duty in the Army, the standing policy was that we could only report and get treated for one ailment per appointment, so I figured I’d start easy.

So after Motrin and water and much taking of a knee, a medical scan was finally ordered and the doctors discovered compound problems in my shoulders. Physical therapy commenced and ultimately I was sent on my way with the same problems, a hearty handshake, and a “That’s as good as it’s going to get.” I was still allowed to go mountaineering, but I was told it was going to hurt. The doctors were right: It did hurt. And it got worse, but I had to take care of other maladies first.

Fast forward a few years and I am at the tail end of a medical evaluation board for those other combat injuries to determine my disability rating. The Army was saving everyone time and money by partnering with the Department of Veterans Affairs to conduct the assessments, which was the first good idea either organization had in recent memory. I began the maze that was the board and the compensation evaluation, along with more than 875,000 Afghanistan and Iraq war veterans who have filed for disability so far.

And what a tangled web it was. By this point, the Army had torn my tendons, busted my back, opened up my skull to root in my brain, and shoved needles into my joints, but that was just the beginning.

Having come into the service with fully functional skeletal, nervous, and endocrine systems that had since been permanently damaged, I wanted to be sure I got the treatment I needed to save the many other body parts that appeared to be engaging in post-explosion mutiny.

I’d kept all my extremities — and most importantly, my life — so the lower-than-expected disability rating the VA returned with was acceptable though even my case managers found some of the ratings a little suspect.

For instance, there was the aforementioned problem with my shoulders. Section 4.45 of the VA disability ratings schedule mentions limitations of movement. I have that! Plus a tear in the joint. The VA overlooked the tear and said reaching was overrated, thus gave my shoulders a rating of zero when I can’t even put one arm up all the way. (My days of dancing to YMCA are forever over.)

Next we look at Diabetes insipidus, a condition affecting the salt and water balance in the body and seldom seen in the military. However, I developed it thanks to a bomb that rattled my brain and screwed up my endocrine system. Surely since this triggered the board, it would be accurately rated, no?

You see, Section 4.119 of the schedule states that for a numerical rating I needed to be hospitalized for my condition. But because I take my medication twice a day like a good little soldier, I haven’t needed to go to the hospital and therefore received another zero rating, though the required medication keeping me out of the hospital was what disqualified me from further service.

Sidebar: The unrelated but similarly named Diabetes mellitus, the one that results from the body's failure to produce enough insulin, gets a 10% rating just for requiring diet regulation. If it requires medication, the percentage jumps. I, meanwhile, get to snort terrible tasting chemicals twice a day to avoid the hospital and get nothing. Might be time for someone to look at the ratings schedule, eh VA?

I wasn’t even rated for the mass of coagulated nonsense left from the explosion that is still in my brain and that give me the very headaches that ultimately caused my early military retirement.

I couldn’t handle it: I bailed on the in-service appeal. I’d had enough. The board took nearly two years to determine my disability rating. The appeal might take another year and a full re-evaluation, all with me sitting at headquarters shuffling papers. I took the retirement option and left.

A lot of service members do the same when faced with this choice. We figure we’ll deal with health problems later because we are tired, and then find the process just as bad on the outside. And while hard data is difficult to find, I think current estimates say it will take two to three years to hear back on appeals. No wonder so many service members never bother. But, the thing is that without those appeals, these regulations will never be examined and changed.

Those who have read the rating schedule, who know that there was something overlooked that is worse or will never get better, it’s time to batten down the hatches and prepare for rough seas. We aren’t “owed” by the system, but we do owe it to ourselves and to others affected by the same regulations to take the time to appeal and get the health care we need and deserve.

Now, I have had great luck with seeing doctors, nurses, and employees at the VA who want to make things easier. I receive great treatment for my conditions, regardless of my rating. In general, I’m satisfied, but I still think there’s a glitch in the matrix — that I’m essentially penalized for taking my medications and trying to function fully with a half-functional shoulder.

So I’m rolling up my sleeves and heading back into the fray. Let the appeals begin.

The full scope of trauma from over a decade of war has not even fully hit Washington because too many of us gave up on appeals after waiting for what seemed like too long. But, it’s time to fight for the right to party, or at least to be able to dance at your nephew’s bar mitzvah.

Elana Duffy is a 10-year veteran of the U.S. Army and a veteran of the conflicts in Iraq and Afghanistan. She currently lives in New York City and works as a business communications and writing consultant.